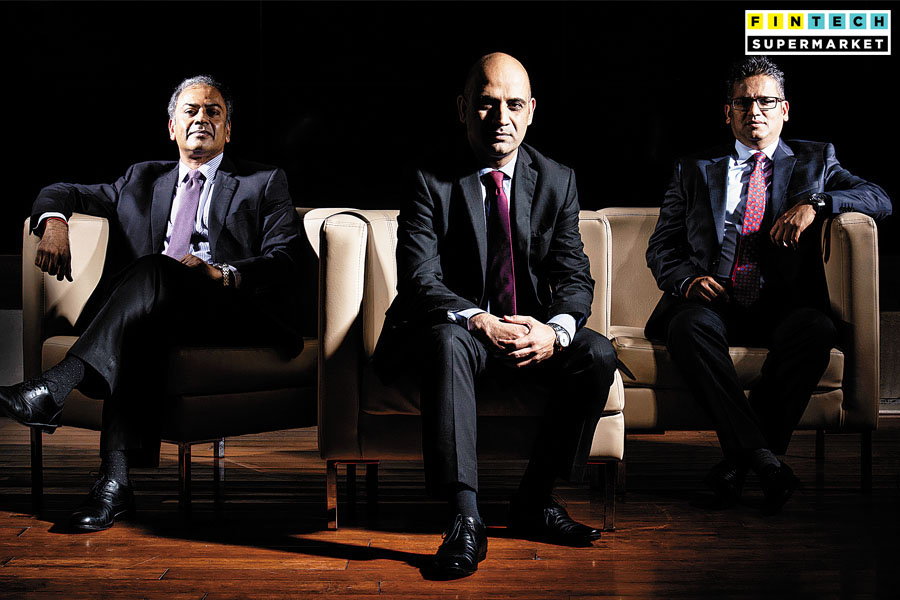 Four years ago, Aditya Puri, HDFC Bank’s managing director, visited Silicon Valley to evaluate if fintech firms will disrupt traditional banking and understand how new technologies were transforming financial services. The trip turned out to be fruitful in more ways than one as the bank implemented 68-year-old Puri’s learnings in quick time.

“We have all the pieces; we just need to put them together. We should be the ones disrupting ourselves,” Nitin Chugh, HDFC Bank’s country head (digital banking), recounts Puri’s message to the top management. Puri also spoke about collaborating with fintechs as equal partners, something unheard of till then given that banks in India were sceptical about working with startups. That apart, they were averse to the idea of defining new contracts and licences in the banking space.

HDFC Bank was among the first banks in India to join forces with fintech companies to offer solutions. Last year, it launched the Centre of Digital Excellence (CODE), a first-of-its-kind initiative that mentors fintechs and startups incubated at the country’s top technical and B-schools.

The bank, in 2013, had already created a central product team that would interface with all departments. The first digital solution was ‘missed call banking’ through which customers with feature phones could avail of services such as checking their account balance or requesting for cheque books without having to visit a branch. In three months since its launch in February 2014, it clocked a million customers; the number has shot up to 4 million a month now. “Those who started with missed call banking have graduated to mobile banking,” says Chugh.

HDFC Bank first collaborated with a fintech in May 2014. It partnered with Kochi-based MobME when it launched Chillr, a multi-bank payment service through which one could swiftly transfer money to family and friends, starting with ₹5,000; one can now extend it to ₹100,000 using the Unified Payment Interface. This was followed by the launch of PayZapp in June 2015, a one-click payment solution app that gave customers the option to send and receive money, make bill payments, book hotels, buy tickets and make grocery purchases.

The bank claims to have constant dialogue with 70-80 startups at any point of time to explore solutions using new age technologies such as artificial intelligence (AI), blockchain and Internet of Things (IoT); it tests over 150 active projects regularly. 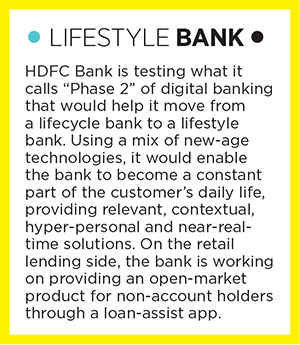 The positive feedback to its digital services encouraged the bank to launch campaigns such as ‘Account kholo chutki mein (open an account in a second)’ and the recent ‘Bank aapki muthi mein (the bank is in your hand/mobile)’. HDFC Bank opened its account opening app in 2018; the RBI revised KYC norms this year.

As part of the bank-in-your-hand digital move, in May 2015, it introduced the option of availing loan in a paperless, digital form in just 10 seconds. “This was triggered by the need to enhance customer convenience. Customers wanted not just a loan approval but also disbursal,” says Arvind Kapil, group head, unsecured loans, home and mortgage loans, HDFC Bank. “This was the biggest gain for the customer, who simply seeks to be empowered. After all, personal loans are the new working capital for the salaried class,” says Kapil. The bank says it disburses close to ₹1,000 crore a month now through its 10-second loan window.

In 2018, HDFC Bank has also introduced newer products such as digital loans against shares and loans against mutual funds. If there is an emergency, instead of redeeming mutual funds, the bank will offer a loan in three minutes through net banking, holding the customer’s mutual fund account as a collateral.

In the personal payments space, the bank has expanded its digital presence with the launch of virtual cards or Instacards through which one can do online transactions. Rivals such as State Bank of India (SBI), Kotak Mahindra Bank and ICICI Bank have also launched variants of the same. “It was important to have a product available to customers in real time, which they could use conveniently,” says Parag Rao, country head, payments business and marketing, HDFC Bank. Three lakh HDFC Bank customers use the virtual card to transact, according to the bank.

The digital journey for other banks like ICICI and SBI continue to gather momentum as well. ICICI Bank has invested in fintechs such as FingPay and used some of its solutions towards its Eazypay app. SBI has tied up with Reliance Jio to integrate its digital banking app Yono with MyJio app. Yono (you only need one) has 2.5 million users and can help customers open an SBI account digitally, transfer funds and get a pre-approved personal loan digitally.

THE FINTECH WAVE
While these products and services have yielded favourable results, HDFC Bank is gearing up for its most exciting phase. Chugh talks about EVA (the bank’s electronic virtual assistant), an AI-powered banking chatbot, whose technology was built by fintech Senseforth. It has now been configured for voice through Google Assist and Amazon’s Alexa. EVA has answered more than 8 million queries from a million customers and is now integrated with the bank’s interactive humanoid IRA (interactive robotic assistant).

Besides, HDFC Bank works with Google Tez to operate its UPI handle while, on Facebook, it has tied up with Niki.ai, a Ratan Tata-backed fintech, to create a chat platform, do ecommerce transactions and pay bills or buy insurance on Facebook Messenger. The bank’s expense tracker on mobile is in partnership with another fintech Money View while its Digital Command Centre—where the bank engages through the internet and all social media platforms—was built in collaboration with an analytics-based marketing fintech LocoBuzz. The bank also works with assessment technology provider Talview, which helps it carry out cognitive interviewing platforms on video, as part of its HR tool.

Besides consumer banking, HDFC is testing at least 50 projects that could use AI not just for chatbots, but also in the areas of underwriting, collections, portfolio management, data mining and digital marketing.