A day before the region goes to polls, Forbes India stitches together telling ground reports from the state's west end, showcasing which way the large number of women voters lean 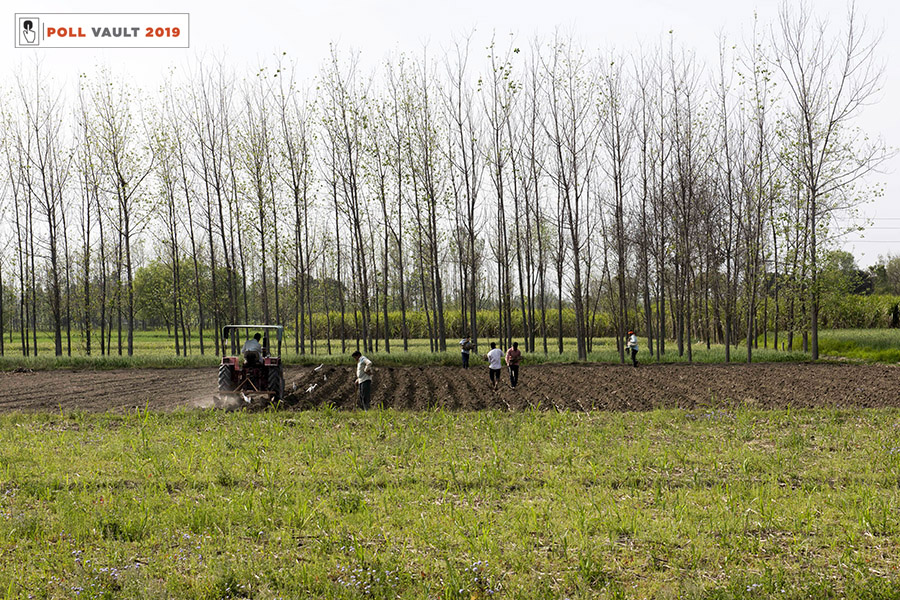 In a week-long reporting assignment, Forbes India’s Divya J Shekhar travelled more than 850 km across Uttar Pradesh, to explore the voting behaviour of India’s most populous State through gender and socio-economic hierarchies. While you can get the big picture here, as UP goes to polls from April 11, we bring you detailed ground reports and region-wise takeaways of the expectations and motivations that drive women, who are going beyond caste dynamics to demand everyday freedoms like employment, expression and education, to exercise their franchise.

Bastis (slums) in the Chilkana Sultanpur village in west Uttar Pradesh (UP) have traditionally been Bahujan Samaj Party (BSP) loyalists, though the tide of first-time voters seems to be swinging toward Narendra Modi. Voters like 40-year-old Shaista in the Dalit and Muslim-dominated villages have remained loyal to Mayawati—whom they fondly address as —through her three short stints [in 1995, 1997 and 2002], and even after her last full-term in office in 2012. Mayawati is UP’s first female Dalit chief minister.

Unplastered brick homes here also have framed pictures of Dr BR Ambedkar on the walls, with Shaista and her neighbours believing, “only behenji understands what we need. Only she works for us.”

Dalit women such as Neelam, Mainwati, Sushma and Babli, who have lived in Chilkana for more than three decades, are confident that it is only because of the BSP’s efforts that women get basic education. Doesn’t matter if that education usually stops after Class 12, and almost none of these girls get to pursue employment. Most of them toil in farms, help in anganwadis, or participate in local self-help groups (SHGs).

“In my time, I was among the few Dalit women of my village to get educated,” Neelam claims, believing that women have to decide for themselves, no matter what, because the current government has “not even done 10 percent of what they promised. We do not feel safe walking on the roads, Dalits and Muslims live in fear...they don’t know which word or action will incite violence against them.”

Youngsters think differently. For 18-year-old Seema and her friends studying at the nearby JJ Inter-College, all that matters is Modi building toilets and pukka homes in their village. “So many farmers have received money in their bank accounts,” Seema says. When asked if she is sure of the government’s income transfer scheme reaching beneficiaries, Seema admits it is just something she has “heard”, especially through social media and WhatsApp forwards, but is certain is true. “My friends and I have recently got voter IDs done. We will vote for Modi,” she says. 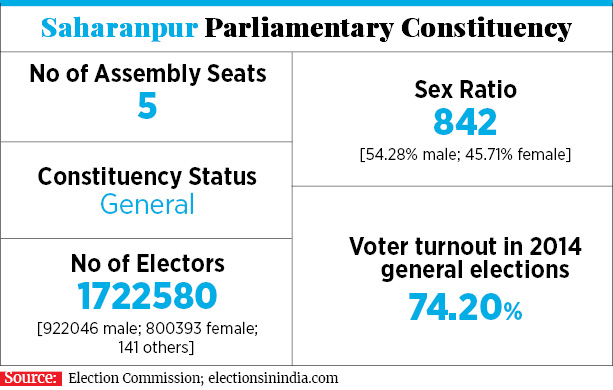 In this gathbandhan versus BJP game, family opinion and loyalty determine women’s votes
The bypolls conducted in Kairana last year was a testing ground for the united opposition [Samajwadi Party (SP) - Bahujan Samaj Party (BSP) - Rashtriya Lok Dal (RLD)] versus BJP. It resulted in the former being backed by 51.2 percent of the total 16.6 lakh voters, thereby defeating the latter by over 40,000 votes.

Ahead of the general elections, this crucial West UP constituency, where the BJP was propelled to power in 2014 after riots broke out between the Jat and Muslim community in the nearby Muzaffarnagar, seems to be walking the tightrope between family loyalty and hope for better governance. Women voters, in particular, seem to be influenced by causes and parties that matter to their husbands or their families.

Kavita, whose identity seems limited to ‘Uttar Pradesh ki bahu (daughter-in-law), Uttaranchal ki beti (daughter)’, says that after her family [husband and two sons] migrated out of the village to Kairana’s outskirts in 2016, their properties did not fetch even half its value. The reason: Demonetisation. Her husband is a farmer waiting for his dues from the sugarcane mills in the constituency. “Politicians are only concerned about their kursi [chair], not people,” she says. Despite everything, she says she will vote for Modi. “My husband says Modiji is doing good for the country.”

This time around, the mixed population of Kairana—comprising approximately 5.5 lakh Muslims, 2.5 lakh Dalits and 1.7 lakh Jat voters—seems to be looking beyond the communal debates that revolved around the constituency in 2016 [with regards to the supposed ‘exodus’ of Hindu families fearing sectarian violence].

For instance, many people like Kavita’s neighbour Simran, swear loyalty to former BJP MP Hukum Singh [whose death necessitated the bypoll last year]. They would have supported his daughter Mriganka, but since the BJP has fielded Pradeep Choudhury [a Hindu Gujjar] instead, they would rather vote for Tabassum Hasan [also a Gujjar, who is contesting from an SP ticket]. Women of the constituency, however, as Simran says, are arriving at these decisions not as a result of their independent thinking, but through “discussions with family and friends.” 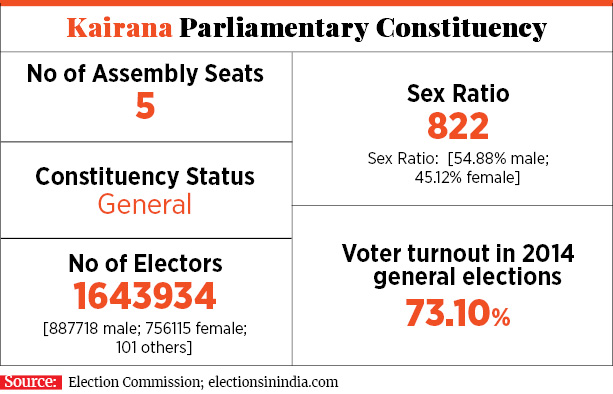 Muzaffarnagar against Modi
In Muzaffarnagar, the clash is between RLD chief Ajit Singh and sitting BJP MP Sanjeev Balyan. The constituency where the BJP came to power in 2014 on the heels of the violent riots that killed 62 and displaced over 50,000 people, is seeing strong support to the SP-BSP-RLD combine.

“Muslims, especially women of the community, will all stand with Ajit Singhji, irrespective of who supports him or doesn’t,” says Rehana Adeeb, an activist who helped rehabilitate female victims of the riots, and is now working to increase voter awareness among them. She explains that the BJP’s efforts to pass the Triple Talaq Bill is being looked at as a political decision by most women, who are more upset about various other direct threats, like unsafe public spaces, lynching in the name of cow protection and lack of compensation for riot-affected victims.

“Who will address shutting down of slaughterhouses and meat shops that mostly employ Muslims, casting a question mark on people’s livelihood?” Adeeb asks. “All of us here are clear about one thing: Humko Ramrajya chaihye, par Ramji ka adarsh Ramrajya, Modi ka ramrajya nahin. [We want Ramrajya, but the ideal Ramrajya of Lord Rama, not Modi’s version of it.]”

While the gathbandhan (united alliance) could claim to have the backing from Dalits and Muslims, the Jat voters of the constituency might continue to support the BJP. While the elders in the Jat community seem to be favouring the RLD, the youngsters appear divided in their opinion. 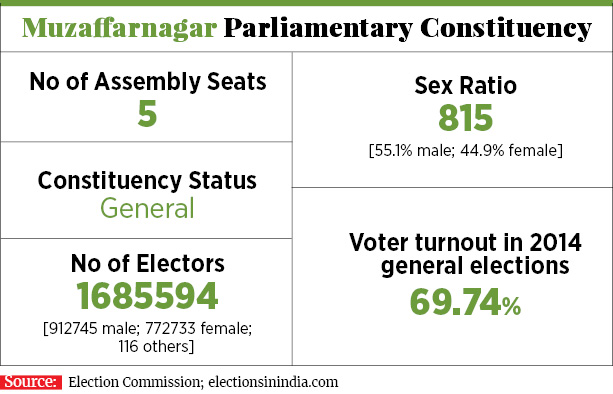 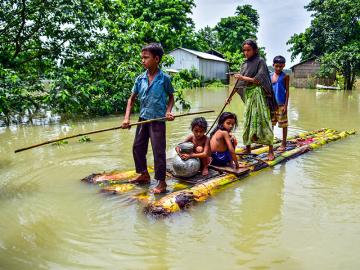 Photo of the Day: Assam ravaged by floods 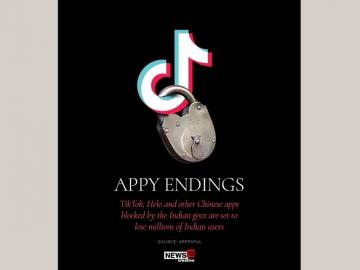 What Chinese apps stand to lose from India