Macro changes are taking India towards a positive era of strong individuality, personalisation, and hyper-targeted yet affordable campaigns. Let’s look at the top five factors to consider before your next year’s campaigns 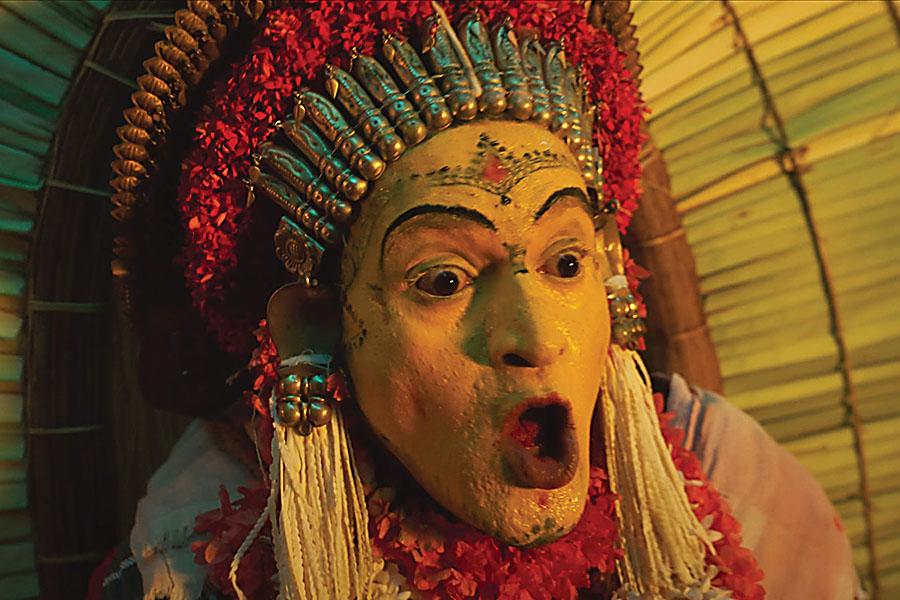 A still of the Bhoota Kola dance from the movie Kantara. Image: Kantara

It's that time of the year again. No, not of holiday movies, hot chocolate, and New Year's resolutions. I mean, yeah that too, but this piece is about the trends to watch out for in the coming year.

Today, there are a lot of macro factors that directly and indirectly have acted as a catalyst for the shift in the audience's behaviour and by extension, brand decisions:

1) There is a war controlling liquidity across the world

4) A surprising resurgence of retail media

Together, all of these changes are taking the country towards a positive era of strong individuality, personalisation, and hyper-targeted yet affordable campaigns. Let’s look at the top five factors to consider before your next year’s campaigns.

1) Regional is the new global

Over the last two decades, most advertising campaigns were rooted in modern lifestyles and an aspirational way of living. One of the biggest cultural shifts that has come in content consumption recently—especially visible in movies, songs and podcasts—is the extraordinary rise of original regional stories from every part of the nation. It will soon also make a way in mainline advertising and marketing campaigns across all major brands in the country. The big western narrative has now been replaced with an internalising outlook of authentic indie experiences.

It isn't that ads and campaigns about smaller regional stories weren't happening before, but either most of them were limited to niche social campaigns only made for awards or they did not have the luxury of big budgets to showcase these stories in the light that they deserved. But now you can expect the much talked about Kola dance in the Kannada movie Kantara being captured in a Samsung Galaxy Z Flip phone ad or an adorable Assamese kid drooling over masoor tenga in a Zomato ad. And this transformation will most definitely manifest in some internationally admired campaigns as the West, like with Rajamouli’s RRR, will experience things they don’t find in their own homes.

A lot of regional languages will also finally be sincerely used across all pan-India campaigns. Slowly and steadily from the habituated half-baked direct translation of the English or often lazy Hinglish copy, now nuanced, meaningful lines written in those regional languages will also follow. The marketers will finally realise that the more rooted and regional it is, the more universal and honest the connection will be.

OTT’s time came three years ago. Now they are just reaping the benefits. Their content targeting is already extraordinary. And our choice of movies and shows tell far more about us than any resume can. So imagine, if Penguin wants to market its new crime thriller novel and it could reach people who have seen Mindhunter, Dahmer, and Making A Murderer, isn’t the targeting spill going to be at its minimum and the possibility of conversion handsomely more?

Traditional TV isn’t dead but paying customers, especially those who shop online, are rapidly moving towards CTV (Connected TVs). Even in rural areas, OTTs have a strategically economical, mobile-only plan with players like Amazon Prime starting as low as Rs89 per month, and they too are scheduled to begin their ads soon. So advertisers today, to a large extent, can reach both. Let’s see the numbers. India has a total of 68.5 million active DTH subscribers (Dish, Airtel, Tata Sky and so on). The OTT subscribers? 97 million. That’s almost a 35 percent difference. Plus, considering most DTH services are actively bundling OTT channels to beat the competition, this percentage will only grow in the next year. OTT advertisements are, of course, at their nascent stages with players like Disney+ Hotstar collaborating with Swiggy during live IPL cricket matches, but the more detailed the targeting will become in the future, the more Meta and Google would find their clientele shifting—the reason why one of them at some point would be bidding on Netflix to stay on the top, but that’s a piece for another time. For now, expect ad spends to start shifting towards OTT channels from the traditional ones, especially with plans starting as low as Rs10,000 per campaign for the homegrown platforms and from Rs1 lakh for the global brands, with comfortably cheaper reach than the social media giants.

Also Read: Why the Netflix business model will take more than a quick fix

The importance of personalisation has been much talked about for the better half of the last decade, but now in every single conversation, your customer expects a certain level of intimacy.

And that will only happen when your data is properly categorised and funnelled. Even mass audiences in 2022 have already experienced automation and customisation in one form or another, and won’t be impressed with just a name tweak on an SMS or a mailer. And it need not be big, mainline campaigns like custom packaging if you are a startup and the budgets are low. Things that are already happening—like in-app notifications where you can nudge with ‘their’ favourite evening snack or let the AI software create an exclusive grocery list for them—need more effort in thought than blind cash burning. Why not plan different versions of blog topics for different sets of your audiences? Or say even if you’re a neighbourhood retail shop, the joy and return rate of your loyalty program would be far more when the coupon message and offer you give them is unique to their preferences and saved wishlists. It shows you care and they are more than a number to you. Deep data mining arms you with consumer insights and trend casting that, more often than not, strategically accelerates your business growth. Even from the thousand feet view of product design itself, just look at what Shein has achieved with deep personalisation. The $100 billion giant minutely understands the designs trending globally and gets its huge team of 800 designers to create variations of them with around 6000 new items going live on the site daily.

When your content strategy is driven by data and analytics, everyone wins. Lesser spam for customers and more relevant leads for you.

First, let's address the elephant. No, selling consumer data by anyone to anyone, which makes the users vulnerable to phishing and scams, isn't right under any circumstance. But we aren't discussing digital crimes, we're simply talking about the data storage and mining by brands and the impact it has on the customers, who already know about the practice and still agree to all the terms and conditions of the barter. And as much as this might not be a trend in the traditional definition, besides being aggressively debatable to some, understanding this is imperative for brands to not spend money on elaborate privacy campaigns in FOMO.

This year had Apple pushing the pedal on its last year’s global campaign - “Privacy. That’s iPhone.” They want to be seen as the champions of the public's right to privacy. Of course, it doesn’t hurt when their ad revenue by monopolising all ads on its platform goes up by billions of dollars. Google used a similar “it’s for YOUR safety” trope in its PlayStore all these years and is now being tried in EU, and Indian courts for the same. But let’s forget the self-serving narrative of the Big Four or how this ad blocking will only help the already influential brands and ask a fundamental question: Does it matter to people that they are the product and hence all the apps are free for them? To most, the answer, not surprisingly, is nope. How many around you deleted their Facebook and Instagram accounts after the Cambridge Analytica scandal? Or LinkedIn, Canva, Quora, Yahoo, Uber or Zoom where the data of millions of customers was compromised.

YouTube Premium, even after clubbing with Youtube music streaming, still makes up only 8 percent of YouTube's overall revenue. The point is, there were and will be two extreme audiences for every brand. The super-elite, who can afford all the premium features of a dozen brands at full price and the rest of the majority pyramid, who don't mind being the product as long as they get a good deal, customised content and/or direct remuneration for being ad prospects. The audiences in the middle, unfortunately as most economists will tell you, will slowly go extinct. So unfortunately though the media will still talk more about the need for stricter privacy laws, brands will keep storing our data as the ad-free versions of all their services, otherwise, they won’t reach the majority of consumers in developing and developed countries alike. And once a brand is externally funded, they need to perpetually keep scaling to survive (Looking at you, Twitter). Or just look at Netflix, the pioneers of digital entertainment, who will now bring in ads to grow without discounting the quality and letting their service be accessible to all. 'Freemium apps meeting the best deal', is what the masses desire. In a nutshell, revenue earned from consumer data would now become more commercialised and regulated (not banned), where eventually, people will happily start earning for being voluntary active leads.

5) SEO for humans before machines

Content marketing agencies today are akin to social media agencies a decade ago. You will find one a stone's throw away and they all promise to be Google whisperers. Most of you would have heard something along the lines of, “We will make your website content rank on page one of at least three keywords in two months". And to be fair, while some rare handfuls have a strategic approach, the majority just attempt to fool the algorithm by actively using high-ranking, trending words on your website and blog. The lack of actually doing any in-depth original research about the category or creating unique content around it hurts the brand in the long term. Of course, when most are ready to charge 3-4 rupees per word, you aren’t giving them the bandwidth to hire subject matter experts. But that’s all going to change in 2023 after Google’s already announced a 'helpful content update' which will promote content that is 'unique, authentic and something you haven’t seen before.'

So if you’re a brand that wants to create content with SERP ranking in mind, there is a simple formula: Create original content that is helpful to the users of your category and directly shows your expertise in the same. Goes without saying, make sure there is at least one content creator from your home industry in the team—aesthetics only work when the research and experience are robust.

May you enviably evolve with every new market trend, and may your brand have a positive impact on both the banks and the world this 2023.

The writer is a chief strategist and founder of Salt and Paper Consulting. Twitter: @iamabhik

5,462
Thank you for your comment, we value your opinion and the time you took to write to us!

Tweets by @forbesindia
Prev
Consolidation, transformation and diversification: Businesses unlock a new future with a deals approach
Next
The unfortunate case of Chanda Kochhar—notes from a former colleague