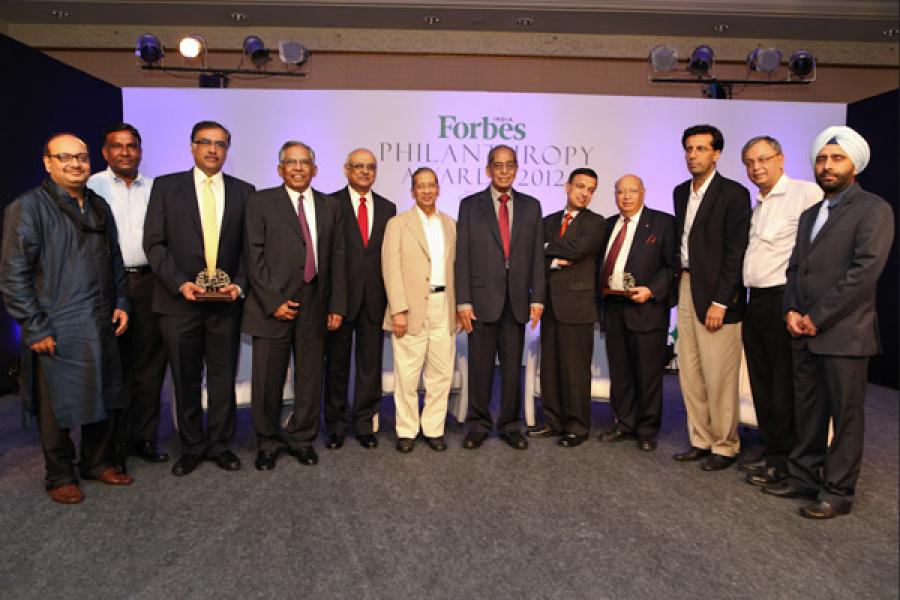 A small but highly distinguished gathering attended the inaugural Forbes India Philanthropy Awards (FIPA) on Wednesday at Bangalore's Leela Palace. The event was recognition of work done by leading businessmen, industrialists and entrepreneurs for social good. These awards will now be an annual feature.

In his opening address, Forbes India editor Indrajit Gupta said the awards have been constituted to "recognise business leaders who have stepped up to the challenge of serving our people, especially those underprivileged who need the support." We seek to identify "business as a force for good", capitalism that is "conscious" and financial success that does not come at the cost of society, but that which seeks to grow by helping a community improve, he said.

The chill in the Bangalore air was soon replaced by warm stories of social good and community development, shared by some of the most illustrious business leaders of India's IT city. Hosted by Forbes India Contributing Editor Mitu Jayashankar and Editor Special Features Peter Griffin, the first edition of FIPA rewarded ten eminent people, who have been change-makers, innovators and executors in the field of philanthropy. Wipro chairman Azim Premji was awarded the Outstanding Philanthropist of the Year for setting up the Azim Premji Foundation, that seeks to contribute to quality universal education. Fifteen years ago, Premji was disturbed to see school teachers being used for election duty and wondered if “that’s the respect our Government gave to teachers”. The event inspired him to set up the foundation which has been active over the last decade. “We have also started a not-for-profit university and have to scale that up massively at the grassroots level,” Premji, who believes that his wealth belongs to society, said while accepting the award.

The Murugappa family, which set up the AMM Foundation (an autonomous charitable trust) through the $4.4 billion Murugappa Group, was awarded the Distinguished Family of the Year.  MV Subbiah, former chairman of the group, collected the award on behalf of his family and said, “Modern India doesn't know that the Vysya community has always kept a part of their profits for the society.” He quoted the Thirukural, “Wealth and knowledge, if not shared, is useless.” Former ICICI Chairman Narayanan Vaghul who is regarded as a pioneer in Indian banking was awarded the Corporate Catalyst. He helped start the ICICI Foundation and played a catalytic role in setting up Pratham which provides education to the children of slum-dwellers. He’s also on the board of the Azim Premji Foundation and GiveIndia. In 2010, he helped start the First Givers Club. Vaghul said, “Commitment is the most important thing for me,” adding that today’s youth is much more passionate about social issues “than our generation was”.

The Outstanding Corporate Foundation award went to the Tata Trusts, the largest philanthropy initiative in India with annual disbursements of over Rs 500 crore. They have the largest network of partners, or NGOs, to disburse funds. AN Singh, managing trustee at Sir Dorabji Tata Trust, accepted the award on behalf of the corporation. He said for philanthropy to grow “sustainability, focus and measurement tools” are needed.

The Good Company Award went to Jain Irrigation Systems for developing micro-irrigation systems that reduced water usage. Its methods have raised annual incomes of small farmers by up to Rs 46,000. The company’s founder-chairman Bhavarlal Jain, who accepted the award, said, “In agriculture, we propose and He disposes.” Despite naysayers, he stuck to the difficult sector and “worked for a cause that affected the lives of millions of farmers. That feeling was warm and fuzzy.” Ashish Dhawan was recognised as the NextGen Leader in Philanthropy for setting up the Central Square Foundation, a venture philanthropy fund for improving educational outcomes for kids of low-income families. Dhawan deserted a promising career as a venture capitalist because he was “passionate about teaching”. He brings in “good people, objectives and business models” from his world of private equity to the field of philanthropy.

Former chairman of the ICICI Foundation Nachiket Mor, who had earlier worked with ICICI Bank, won The Crossover Leader award for providing a working alternative to the traditional micro-finance model. He serves as the non-executive chairman of the Board of Directors at SughaVazhvu, which provides rural healthcare services and is based in Thanjavur in Tamil Nadu. “The scale of problems is much bigger than I’d imagined,” Mor said. He believes that social change is a collective responsibility and “we should act as innovators and find a way to engage with the government”.

The Cause Marketing award went to Tata Tea (now a part of Tata Global Beverages) for their Jaago Re campaign, which was an effort to ‘wake up’ an apathetic nation to the issues that concern it. From the importance of voting to being awake to corruption, the campaign successfully used mass media to multiply the reach of its message. Sanjiv Sarin, regional president (South Asia) of Tata Tea accepted the award on behalf of the company. He said, “People actually want to engage but they get overwhelmed by so many systems around. The closer you get to their heart, the more they engage with you.” Lord Raj Loomba was awarded the Distinguished Non-Resident Philanthropist for setting up the Loomba Foundation in the UK, along with his wife Veena. Since 1997, the foundation has been educating the kids of poor widows in India. Courtesy his efforts, the UN declared June 23 as International Widows’ Day, which also happens to be the day his mother became a widow in 1954. Loomba admitted that his widowed mother was the inspiration behind his philanthropic work and said, “If the cause is good, people will follow.”

The final award of the evening went to MindTree Consulting’s Abraham Moses who was recognised as the Good Samaritan. Moses leads a group which travels every month to engage with kids suffering from cerebral palsy, and to orphanages as well as homes for destitute. He’s also led an initiative by MindTree to adopt a school near Bangalore. “My organisation’s complete faith and support inspired me,” said Moses who serves as the company’s director, administration & facilities.

P.S - Here are some snapshots of the event. If you missed watching the live webcast, view the recording on http://www.youtube.com/forbesindia

11,624
Thank you for your comment, we value your opinion and the time you took to write to us!