If 2020 was a year that tested the human will power to survive, 2021 is slated to be the year that will heal 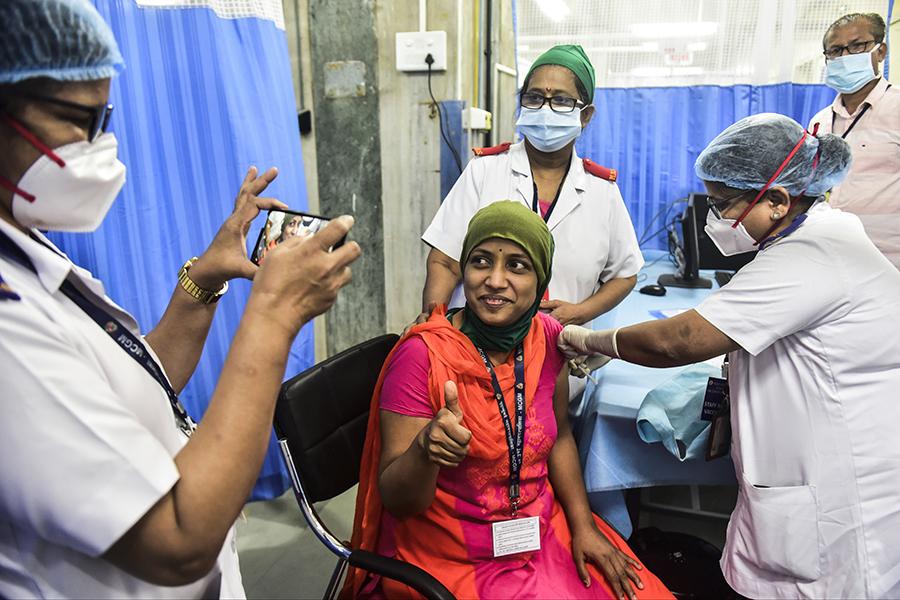 On January 16, 2021, India—the world's largest democracy with a population of 1.38 billion people—kickstarted the world's largest Covid-19 vaccination drive, with 1.9 lakh people vaccinated on Day 1, across 3,351 sessions, involving 16,755 vaccinators. What makes India's vaccination drive against the novel coronavirus unique is the sheer size, scale, and meticulous planning of this mammoth exercise, guided by the humanitarian concept of 'Jan bhagidari' or people's participation. The plan is to inoculate 300 million 'priority population' in the first two phases by July-August 2021. This includes 30 million healthcare and frontline workers that will be vaccinated in the next three months in the first phase. Inoculating 300 million people within six to seven months is akin to vaccinating almost the entire population of the US or vaccinating the combined populations of Germany, UK, Italy and France in record time.

India has reported less than 20,000 daily cases over the past 10 days and less than 300 daily deaths for the last 23 days. That pushed the national recovery rate to a solid 96.58 percent and the case fatality rate (CFR) to just 1.4 percent—the lowest globally. The active caseload now is merely 1.98 percent and daily positivity rate is again low at just 1.8 percent. It is indeed commendable that despite having a density of population of 455 per square kilometre—amongst the highest in the world—India has done an extraordinary job of reining in the total number of cases at 10.6 million. In sharp contrast, US with a population density of just 36 per square kilometre, has reported a staggering 23.8 million cases and more than double the number of deaths seen in India.

Serum Institute of India’s Covishield and Bharat Biotech's Covaxin developed with the Indian Council of Medical Research (ICMR), are homegrown vaccines that vindicate Primer Minister Narendra Modi's clarion call of 'Vocal for Local' and are reflective of the country's immense innovative and scientific temper.

The Indian government has procured 11 million doses of Covishield at a cost of Rs 200 per dose, exclusive of taxes. Of Bharat Biotech’s Covaxin, the number is 5.5 million doses, of which 1.65 million doses are being procured free of cost and the remaining 3.85 million doses are being purchased at a cost of Rs 295 per dose. In effect, India's vaccine rollout is not only the largest in the world but also the most affordable. The PM-Cares Fund will bear the entire cost of the first phase. In June 2020, over Rs 2,000 crore was allocated from the PM-Cares fund for the supply of 50,000 ‘Made in India’ ventilators to government-run Covid-19 hospitals in all states and union territories. Out of the 50,000 ventilators, 30,000 were manufactured by Bharat Electronics Limited, yet again showcasing India's indigenous manufacturing prowess.

Contrast to the policy of obfuscation and apathy followed by China, India showed probity and transparency in taking the Covid-19 challenge head-on. The government's efforts of building over 116 million toilets under the Clean India or Swachh Bharat mission, making India's 0.55 million villages open defecation free (ODF) or giving free health insurance to 500 million Indians under the Ayushman Bharat scheme over the last 6.5 years, producing over 60 million PPE kits and 150 million N95 masks in 2020, bringing home over 3.9 million stranded Indians from different parts of the globe via the Vande Bharat Mission after the outbreak began or extending medical and humanitarian assistance to over 150 countries in the fight against the pandemic, the government's fight against the novel coronavirus was made easier by the fact that a humongous effort went into ramping up India's health infrastructure and making cleanliness a way of life. What is worth mentioning here is that, during the initial days of Covid-19 outbreak, there was only one lab in the country that could undertake Covid-19 tests, but today there are over 2,000 testing laboratories.

The massive vaccine rollout plan has put in place an end-to-end traceability mechanism with RFID and barcoding to secure and monitor the supply chain, transportation, and distribution right from the manufacturing facility to the time the patient is inoculated. Automated data loggers that monitor storage temperature and transfer messages every three seconds, 24/7, to a central unit under tight surveillance have been deployed. The mega immunisation drive may see high-speed vehicles transporting the vaccines, secured by armed escorts on the outside and highly secure Internet of things (IoT) enabled locking system from the inside, to prevent theft and counterfeiting.

More importantly, the government's CoWIN (Covid Vaccine Intelligence Network) app has already registered eight million beneficiaries from the first priority list. The idea is to create a digital health behemoth. The CoWIN app has two parts—one that will be used by the beneficiary and the other that will be a backend module to be used by vaccinators.

If 2020 was a year that tested human will power to survive, 2021 is slated to be the year that will heal, restoring faith in the ability of leaders who are both courageous and compassionate.

The writer is an Economist, National Spokesperson for BJP and Bestselling Author of  "Truth&Dare—The Modi Dynamic"

4,297
Thank you for your comment, we value your opinion and the time you took to write to us!

Tweets by @forbesindia
Prev
The tumult of recession: Of K-shaped recovery and Keynes
Next
Define social businesses to reduce trust deficit between people and corporates