If you applaud at the wrong time at a Symphony Orchestra of India concert, they won't be upset with you

Zane Dalal, Conductor-In-Residence, Symphony Orchestra of India, on why you shouldn't clap between movements (but he'll totally understand if you do). 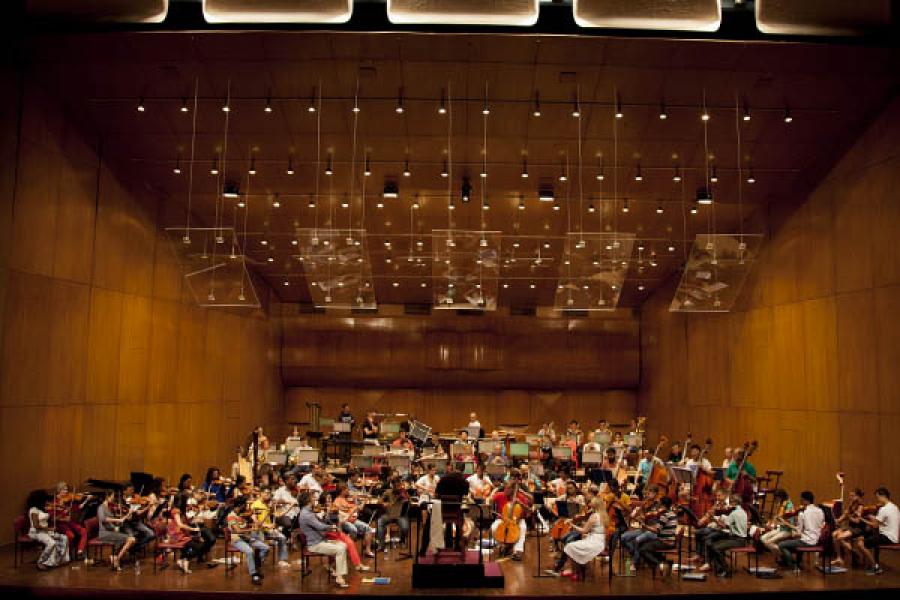 Earlier this month, my colleague Kathakali Chanda and I were waiting to chat with Zane Dalal, the resident conductor of the Symphony Orchestra of India. While we waited, we had our pick of seats in the NCPA’s Jamshed Bhabha Auditorium, and got to listen, and watch, the SOI run through its first rehearsal of the season.

The orchestra is a sea of wild colour, very different from the sober black and white that one associates with its stage performances. Among the varicoloured slacks and T-shirts and bright tops and sports shoes and flip-flops, one pair of brightly-patterned Bermudas stands out. But even it fades in comparison to the bright pink sunburn on one of the cellists. Back to us, however, is one figure all in black.

Dalal is soft, polite in his instructions, but evidently in command. Every little while he reaches behind him for a towel to mop his profusely sweating face.

Several hours later, rehearsal done, he takes a small breather before joining me to chat. His face is drawn, his close-cropped thinning hair is plastered to his skull. He sits down, and admits to feeling faint. I’m concerned: does he need some water, some heavily-sugared coffee? I commandeer a bottle of water from a passing violinist, and he accepts it, swallows a few mouthfuls, rejects my offer to do the interview another day, and insists we talk right away. (Later, he says that he’s still a little jet-lagged, having flown in from Los Angeles two days ago, and, um, he hadn’t eaten anything since the previous night. This was at 3pm. Then we chatted for an hour. After which he patiently stood for a few portraits. Then, finally, he went off to get something to eat.)

During the course of a long conversation, we dwelt for a short awhile on the one thing that seems to come up with metronomic regularity in every conversation about symphonies in India: the audience clapping between movements. Symphonies are longer pieces of music, with distinct ‘movements’ which explore aspects of the music and its moods. And the convention is that one does not clap between movements. Of course, to differentiate between the end of a piece and the silent space between movements, one would need to know the piece in the first place. Which is not necessarily the case for audiences in India. Then there’s the additional ‘handicap’ of our audiences being more attuned to the decorum of Indian classical music, where it is quite customary—indeed, it indicates that you’re a connoisseur—to express approval of a particularly skilled rendition of a passage immediately, not waiting for the end.

Western classical music’s staunchest aficionados tend to be a prickly lot, and audience members applauding at the wrong time could get some very stern looks from the purists. Some are irate enough to have told Dalal that he should do something about it. You know, get up there and tell people not to clap!

He is quite certain that that is something he will never do. “They’ve paid money and come here. You don’t make them feel bad because they sitting next to some stuffy person saying They clapped between movements! How dare they!

“It’s an experience. They’ve given their money, they should enjoy it. Next time around, or the next time, or the next time, maybe at some dinner, someone will say, you know, I heard that you’re not supposed to clap. And then it’s done. I don’t have to sit there and tell them. Some people said, there should be a green light and a red light. I was like, that can’t be right, I’ve certainly never seen that in any professional set up internationally. Perhaps in the taping of a soap opera, but not in a concert hall!

“Sometimes people can be short-sighted about the process of bringing people in to our audiences and growing our audience base. They should look to the potential of why they’re there. Not the rules of the people who set up 20th century European concert etiquette. There was a good deal of interaction with the audience in the 19th and 18th century, especially in opera…and it served us well, with all its shouting, heckling and smelling salts.”

And it’s not that Dalal thinks there should be clapping between movements.

“We can talk about that, discuss it. You can say, Actually, I like that. When I’m sitting at an Indian music concert, the connection between me and the player, the Arrey Waah! is crucial to the interaction. Just like the when there’s jazz going on and there’s a riff with a fantastic saxophone player or there’s a great drum solo. When I’ve paid my money, why can’t I be connected to all these people? I’m just enjoying the music the way I’ve always enjoyed it and I’m Indian and this is what we do.

“And you have to explain, nahi bhai, there is a sacrosanct silence to the music.

“You can explain it in different ways. I’ve tried. It goes something like this.

“What we do up there is very simple. You have the Mona Lisa; you know everything you need to know about it: it’s on wood, not canvas, all the dyes are hand-rubbed from plants, there’s this fantastic sense of perspective behind the shoulders, there’s that translucence of the dress she’s wearing, the folded hands, the enigmatic smile, no eyebrows... whatever you decide is in that picture.

“Then, this is what we do. The masterwork is our book, the composition. What we do is we’re master painters.

“There is the Mona Lisa, on the left-hand side of the stage, and in two hours, we will recreate it.

“We will repaint the Mona Lisa. We will not make any mistakes, we will do it from start to finish, in a moment in time. And you will have understood that it was made on wood, with natural dyes, and we will try and get the translucence, and we’ll try and get all the things that the composer asks us to do, and we will go after this for two hours, all of us, in silence, just create that masterpiece again. We paint in sound. So your coughing or clapping is like throwing paint up on our canvas, while we’re trying to do it without any mistakes.

“Now if you explain that to someone, they’re going to sit on their hands. You have to explain that this is a sonic painting, and it has to take place in the terms that we’ve set up. So any sound, whether it’s unwarranted from the stage or the audience, is like someone taking a bright colour and throwing it on to the canvas while we’re trying to create our Mona Lisa, our sonic painting that starts in a moment and drifts into silence at the other end. Or as we like to say, is ‘brought down and then sent back up.’ Why should you have any human interaction to screw around with it?

“We paint in time, and if that’s not precious enough: we’re in this Swarovski crystal box, which you can look at but not touch... you have to explain that. It’s not that people can’t understand it.”

“I can understand all the reasons why they feel they can and should have this connection with the stage. And sometimes I think we are too stuffy. Maybe we should have a connection between stage and audience. There’s some pieces you can, some you can’t.

“But people shouldn’t expect me to go up there and tell them not to do this, that, the other… that’s not my style,.

“Having said that, if one does come out on stage and restrain the audience by telling them how many movements there are in a certain piece, one will get a clap free concert, but not a silent one…people are still coughing, clearing throats, looking for keys, doing their usual thing,… and, yes, sometimes chatting. They are restrained from clapping for the wrong reasons.

“Also, I’m sure people don’t know that there are times that it is permissible to clap between movements. For example if the orchestra has turned out a really virtuosic performance of the scherzo of Schumann Symphony No. 2, one should recognize the sheer prowess with applause, and people do so, the whole world over.”

On another note, Dalal was bemused by some reactions to the SOI’s recording of India’s national anthem.

“I had someone tell me that it was sacrilege that in [our recording of] the national anthem, the cellos didn’t stand up. Scandalous!

“Arrey bhai, that’s how they play! You don’t stand! Every national anthem everywhere in the world, the cellos are sitting because you sit to play the instrument! You have to. It’s like saying play the national anthem on the sitar, and stand playing it; is that possible? But no, no, no! They had to tell me!”

13,875
Thank you for your comment, we value your opinion and the time you took to write to us!

Tweets by @forbesindia
Prev
Our 30 Under 30 felicitation event, Storifyed
Next
Are you an achiever under 30? We want to hear from you!