The coming of age of cause marketing in India

Dhaval is an alumnus of IIM Ahmedabad (IIMA) with a BE in Computer Science from VJTI, Mumbai. He has more than 10 years of experience spanning Information Technology, Management Consulting and Non-Profit Fundraising experience. Dhaval started his career in software development with Citicorp where he worked for 4 years. Post-MBA, Dhaval worked with management consulting firm, A.T. Kearney for 3.5 years. For 2.5 years during this period, he was volunteering with GiveIndia for about 15-20 hours every week. He joined GiveIndia about 3 years back leading its Internet Giving, Technology & Backoffice teams. Under him, Internet Giving grew nearly 4 times over a 3 year period. Since Jan 2011, Dhaval has taken over as the CEO of GiveIndia. 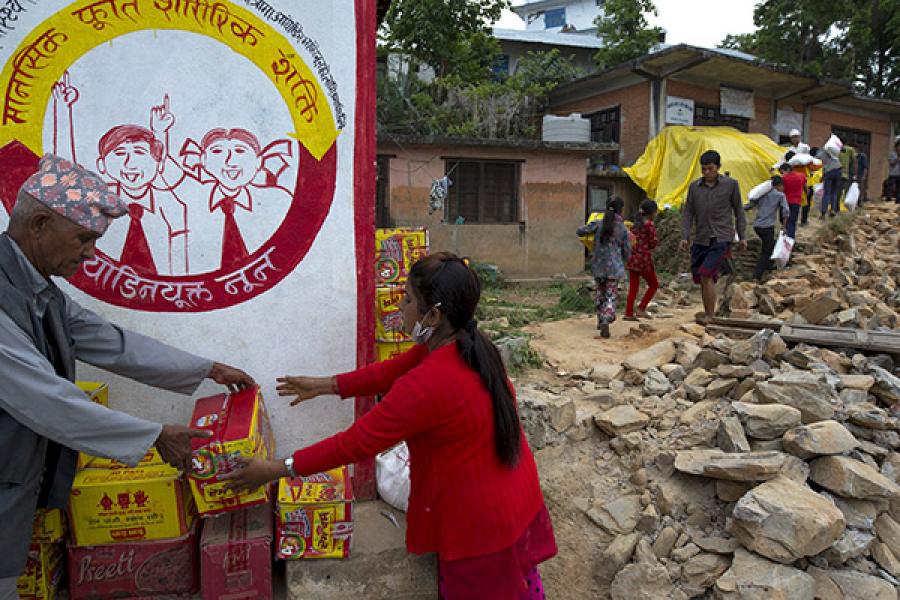 The recent earthquake in Nepal prompted people from across the globe as well as the Indian government to offer help in every manner possible (Photo: Athit Perawongmetha / Reuters)

A little over a month has passed since an earthquake tore through the underbelly of Nepal. Not among the highest on the Richter scale nor among the highest in terms of death tolls, but in a country which ranks 157th out of 187 on the Human Development Index, the little that gets taken away leaves a lot less to survive on.

From an Indian perspective, this earthquake was path-breaking in two ways – firstly, the response of the Indian government driven visibly by our very energetic prime minister himself. We showed great resolve and effort in not differentiating between citizens of any country and treating everyone as humans first – be it Nepalis, Indians or those from any of the foreign countries whom our forces rescued. Following in these footsteps was the second path-breaking response – from all of us who have come out with man, money and material to help our distressed neighbour. Such a response outside our borders has never been seen to date – we’ve far too long believed that it’s our country which needs to be helped first before we go outside our borders (hear the rumblings of the $1 billion credit line we have extended to Mongolia – it’s really an overdraft facility and it’s being treated as something we’ve already given away). But this disaster has shown the world, that Indians have come of age and we are ready to send our doctors to help the injured, our NGOs to provide relief and rehabilitation and the common man is more than willing to contribute with donations and goods. Our status as human beings will always be first and foremost.

But another revolution has happened with this disaster – one that has largely gone unnoticed, but one which has the potential of significantly changing the parameters under which companies and brands do business and engage their consumers. For far too long, brands have been busy trying to only sell to customers – without ever trying to be in the shoes of the consumer and trying to care for things that they care about. It is a well-established paradigm of business that you have to care about what the consumer cares about and you need to develop a relationship with them and their interests to create a loyal engaged consumer. Many companies have relationship managers – but these are strictly namesake and might as well be called sales managers or more correctly push-till-you-irritate-or-sell managers.

Does this mean that brands do not understand their consumers beyond the association with the brand? No – they do, but primarily the materialistic side of it – where do they holiday, which club house they frequent, what car and how many cars they have, which movies they like, what cultural shows they prefer – however, is this what really makes an individual happy? Research after research has shown that we derive greater happiness in what we give than what we receive. However, none of the so-called relationship managers understand this aspect of their consumers and are loathe to even broach it. Indeed many of you have reached out to non-profits such as GiveIndia and Dasra for your philanthropic needs. Have you wondered why your wealth advisor who advises you on everything else from insurance to art and commodities can’t help you with social investments?

Because marketing refers to marketing wherein a brand uses a socially relevant cause to market itself, thus causing benefit to both the cause and itself. A socially relevant cause is defined as one that the consumer of the brand cares about. In fact, consumers are willing to pay more for products from such companies – 75 percent of consumers were in fact the number thrown up by Nielsen Survey on Global Corporate Responsibility 2013 - up from 56 percent in 2011. And this is in India which showed the maximum such consumers among developing nations that were surveyed. According to a Havas Report, more than 60 percent of consumers in India care about the social impact of products, effect of product on society and would like their favourite brands to play a much larger role in society. So why haven’t brands taken note of this to date?

While the Nepal earthquake has certainly not changed this completely, there is a quiet revolution in the making. Multiple companies have realised that their consumers care deeply about this natural disaster and have come forward to help them contribute in any small way possible through their platforms. Doing it through their platforms means that the customer is engaged with the brand and values the brand for having provided them with the opportunity to do so vis-à-vis providing a link on a website to some NGO. In the past, companies have been slow to make these changes on their platforms or have been plain averse to it – however, this time, many of the new-age startups with cutting edge technology skills have taken the leap and provided donation platforms within days of the tragedy. Uber India is donating ₹ 10 from each ride, taskmitra.com is donating 10 percent of revenues and Comedy Laugh Club is donating 20 percent of the proceeds. Ola and Flipkart are allowing people to donate directly. Flipkart is also matching 100 percent of the contributions. While the models of Uber, taskmitra.com and CLC are better since they engage the customer during the process of using the platform, the large user base of Ola and Flipkart should have yielded something significant as well.

The ideal model is one wherein while making a payment for a service, the donor is asked to make an additional payment for the social cause. This will truly engage the donor since he or she has knowingly made a contribution. Platforms are often scared that this would eat away from their revenue or scare the consumer away, but the truth is that one’s giving budget is different from one’s product/service buying budget. This and the fact that users love the brand for providing them with this opportunity were the results of running a sustained campaign for more than five years with makemytrip.com when I was with GiveIndia. In addition, more than 90 percent of consumers said they loved this idea and more than 50 percent were willing to buy tickets on makemytrip.com even if the tickets were slightly more expensive. eBay in the US has known for years that allowing a part of the winning bid to be donated to charity increases the size of the bid. Most people want to give but are not aware of the existence of giving platforms and thus have not had the opportunity. Brands can significantly leverage this opportunity with consumers to increase leverage. But brands must use some more science and expertise while creating such campaigns for maximum benefit.

As the next step in being socially responsible with public money, companies must put out in public domain how much money was raised and what it is being used for and who is doing so. This will create a lasting impression in the minds of the consumer and will create an image of trust and credibility for the brand in the minds of the consumer. Makemytrip.com created a small microsite to inform their customers of the impact of their campaign - http://www.makemytrip.com/gogreen/ - something simple enough for everyone else to do.

Make no mistake – this is a great beginning and we hope to see more brands do more on a sustained basis, not just during disasters.

Disclaimer: I was the CEO of GiveIndia earlier and had operationalised the makemytrip.com campaign conducting various analysis, experiments and surveys with the donors to gauge what works best.

10,171
Thank you for your comment, we value your opinion and the time you took to write to us!