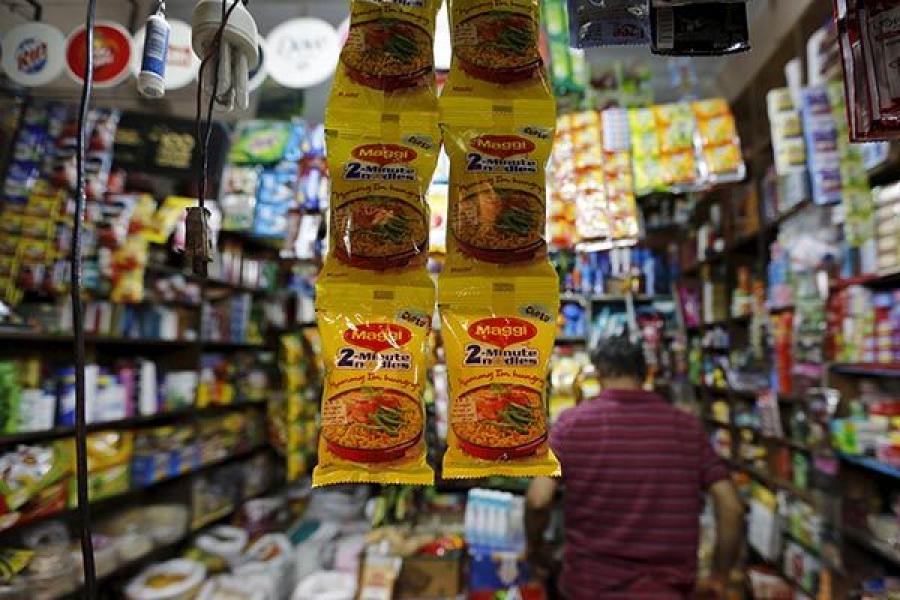 A foreign company can sell me his ware but how dare does he inject foreign materials into my body which is so pure and uncontaminated(Image By: Amit Dave/Reuters)

Just so that I don't miss out the most recent Indian bandwagon. The great Maggi saga.

That fantastic concoction that became a proxy for an Indian mother's love for her progeny; while elsewhere it's still seen as fodder for the lonely bachelor in front of a TV screen in a motel room.

Yes I understand the alacrity.

For the busy and the not so busy housewife, who for decades believed in the "wholesome" ness and the "easi" ness of serving delicious, steaming, tasty 2 minute miracles, they are now having to grapple with this "Loch Ness" instead!

Fear, guilt and the inability to keep serving this in view of what your elders or neighbours might say has made even the most liberated housewife a shaking mess.

She is now checking on each and every vital sign on their kids to make sure aunty Maggi has not spread her evil tentacles.

After all, there are adverts on Maggi in India which had even stated "Maggi is a must, mom isn't".

This panacea of all troubles, the paragon of all virtues cannot be anything but perfect?

One must understand, Maggi is not food, it's a movement, it is a bedrock of the society, it's a solution to all your problems.

We know that "hell hath no fury as a woman scorned". And approximate 200 million of Indian women have been scorned this time.

They accept all injustices but not Nestle and it's broken promise.

Chetan Bhagat says "its junk that is sold as emotional nectar."

Our celebrated TV anchor Mr Arnab sees gold when he sees MSG and lead in Maggi.

The hoarseness, which is only upstaged by inanity usually, has now found a moral conscience too.

It's a matter of record though that large number of dieticians and nutritionists maintain that there is no scientific evidence to establish adverse health effects of monosodium glutamate (MSG).

Some have regularly dismissed MSG concerns as "unfounded" and say MSG is one of the most abundant and naturally-occurring amino acids that are added to foods as a flavor enhancer.

As per at least one prominent expert Hena Nafis, "Recent reports of MSG having adverse effects such as headache, flushing and excessive sweating - which are typically associated with Chinese Restaurant Syndrome (CRS) - have not been clinically established".

In any case the US Food and Drug Administration (FDA) considers the addition of MSG to foods to be 'generally recognized as safe' (GRAS) at agreed levels which are not low.

"It is found in tomatoes, Parmesan cheese, mushrooms and many other vegetables and fruits. MSG is generally a flavour enhancer, and is either found in natural sources or added artificially".

I am not putting up a case which I am ill fitted to defend. I am merely trying to highlight the great Indian minds set again.

And Swiss banks must  tell us whose money they have. We know it too but we cannot share that, least of all act on it.

I am fearful of starting to pretend I am a scholar which I am not.

But a simple Google exercise showed me the following :

"In 2012, a total of 3,883 people died due to diseases caused because of drinking of contaminated water as compared to 3,314 in 2011". Figures from Indian Ministry of Drinking Water and Sanitation.

A government-supported survey last month said 42 percent of children under five are underweight - almost double that of sub-Saharan Africa - compared to 43 percent five years ago.

Apparently 3,000 children die every year in our motherland because of lack of food.

Another one. Pesticides have been directly linked to long-term health effects such as endocrine disruption, birth defects and cancer.

A public alert system in case of outbreaks, food product recalls, chemical food poisoning would be important going forward but does not exist: as per Indian Center for Science and Environment.

Where am I going with this?

Well all these facts we kind of knew this or suspected it anyway. We are all quietly killing millions with food contamination, air pollution, lack of sanitation and Medical services.

Nobody called Maggi - it's not even an Indian name for crying out loud - should be allowed to try to kill us.

A foreign company can sell me his ware but how dare does he inject foreign materials into my body which is so pure and uncontaminated.

So yes, why wait to see what exactly is the extent of the problem or why actually bother to understand the facts as they come out.

A clean and thorough investigation will throw light. So far isolated cases and arguably inadequate sampling means the jury is still out.

But then when we have judges, juries and executioners all rolled into one and they act as moral guardian without ever promising. (Ala our news anchors and leaders). What do you expect?

Yet another round of finger pointing, effigy burning and fiery speeches is on.

Does anyone remember what happened to Nirbhaya"s rapists finally?

Or where is the fellow who "did not" kill Jessica Lal.

I read that in some villages in UP where the water wells are quite far, men marry more than once simply to have a wife (or wives) whose sole job is to get water while the other wives can look after the home.
These water wives tell us so much about us and our progress as a nation.

But then Mr. Goswami will still tell... the nation wants to know, while Mr Chetan Bhagat will tell us about all the "nectars that should be junked"

Wisdom dispensed with hindsight and issues chosen to impress not impact.

And what after that knowledge has been imparted - what is the next step?

Simply move on and go to the next one, take some more pot shots and score a few miserable points for your own brand value, if nothing else.

8,670
Thank you for your comment, we value your opinion and the time you took to write to us!