FILA 2014 gives award-winners a chance to catch up with the jury that selected them and gives us journalists a chance meet them in an informal environment.

The seating arrangements have been finalized, the champagne is on ice and the cameras are ready. We’re gearing up for the biggest (and most fun) evening of our calendar - the Forbes India Leadership Awards (or “FILA”). This evening will see billionaires and entrepreneurs - and billionaire entrepreneurs – descend on South Mumbai to join us in raising a toast to the best business leaders of the past year. It’s been an amazing year for India Inc: with a pro-business government in office, the stock markets have swelled and there’s tangible optimism among the business community. FILA 2014 gives award-winners a chance to catch up with the jury that selected them and gives us journalists a chance meet them in an informal environment. The open bar is the great leveller. 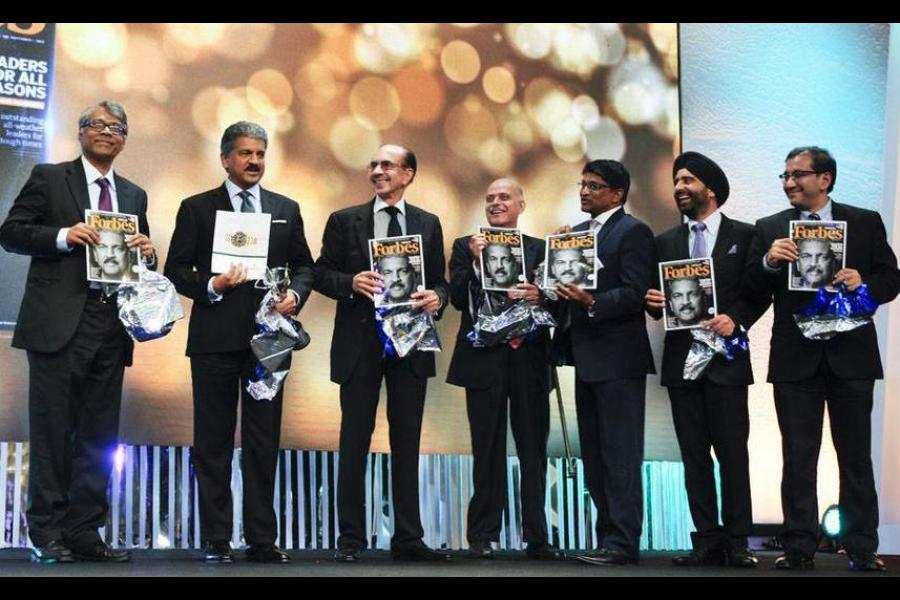 Our 'Entrepreneur for the Year' awards have recognised value creators in India Inc. Kumar Mangalam Birla was our winner for 2012, while Anand Mahindra won in 2013. This year’s winner, picked by our jury, will be announced at the event tonight. We have nine categories that span the gamut of India Inc.

We’re going to kick things off with TED-style talk from management guru Rama Bijapurkar before getting into the awards and the lively debates that accompany them. Take a look at the categories and nominees here.

As students of business, seeing some of India’s most successful people argue head to head is a special opportunity. Watch as Mohandas Pai, chairman of Manipal Global Education, delivered an impassioned argument against Marico chairman, Harsh Mariwala, last year. (Left) Adil Zainulbhai, chairman of McKinsey India and moderator of the debates with Harsh Mariwala of Marico

Our Oxford-style debates are a big draw. Sharp, focussed and furiously argued, they have featured the best minds in India Inc. This year, Ranjit Shahani, Country Head, Novartis India will battle Mahindra & Mahindra’s Pawan Goenka on whether 'Jugaad is really innovation' in our first debate. In our second debate, Anil Singhvi, chairman of Ican Investment Advisors, will argue against Bobby Parikh, Chief Mentor & Partner BMR Associates, on whether India needs an exit policy for managements. You can follow the action on social media: we’ll be posting on our Facebook and Twitter handles. All eyes will be on the flagship ‘Entrepreneur for the Year’ award, which will announced just before we unveil the latest issue of the magazine.

FILA is a great chance to talk business away from the office. Watch this space for photos and event coverage.

7,066
Thank you for your comment, we value your opinion and the time you took to write to us!

Tweets by @forbes_india
Prev
Dear Tendulkar-bhakts: how do you solve a problem like Maria?
Next
Why I’ll always like Kohli, even if he fails