How to evaluate distressed airlines and deals

Airline transformations are difficult because of the way the industry is structured. In a game of brinkmanship, each airline is bearing losses in the hope that competitors would make even bigger losses, become economically unviable and eventually exit 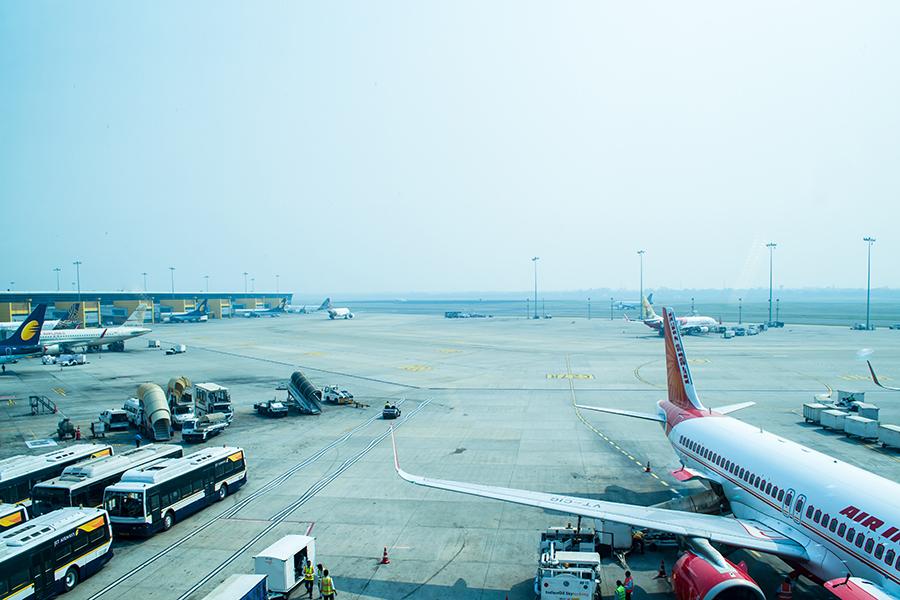 The Indian airline industry, which caters to the seventh-largest civil aviation market in the world, with air passenger traffic growing at around 15 percent year-on-year, is once again hurtling toward distress. Nearly every Indian airline has been recording losses and some of the country’s biggest players are burdened with unsustainable levels of debt. Jet Airways (with Rs 8,500 crore of debt) is temporarily shut and a process is underway to find an investor to help bail it out. Air India (with an even bigger debt burden of Rs 54,000 crore) and its owner, the Government of India, have made several unsuccessful attempts to find a buyer.

Key drivers in the airline industry The airline industry is characterised by long-term business cycles and is deemed 'inherently turbulent'. Some of the factors that contribute to additional turbulence in India are the high price of aviation turbine fuel (ATF), passenger load factor and leverage. ATF constitutes around 35 percent of the total operating costs of an airline in India, while globally it stands at about 25 percent. Wide global disparity in oil prices, coupled with high taxation, has led to a bigger cost base for airlines operating in India. Load factor, a key revenue driver, stood at around 88 percent for healthy domestic carriers like Indigo and global carriers such as American Airlines, United Airlines, Ryanair and Southwest Airlines.

Distressed airlines such as Jet Airways or previously distressed airlines like SpiceJet in 2014 and Delta Air Lines in 2008, had load factors of about 78 percent. A lower load factor coupled with low passenger yields, another key value driver, is a recipe for financial distress. Leverage has also become a critical factor. Traditionally, Indian full-service carriers (FSCs) like Air India and Jet Airways purchased aircrafts directly from manufacturers, which increased leverage. Now, instead of buying aircrafts, operators are entering into sale and leaseback (SLB) arrangements with the leasing agencies to de-risk the business model. The SLB mechanism adopted by airlines has helped them save on the huge outflow of pre-development payments and allowed them to have flexibility in operations. However, for some of the airlines, the damage has already been done.

Valuing an airline
One way of valuing an airline is to look at it as a sum of parts, one part being the core operating business, which is capital intensive, hypercompetitive, cyclical, and that provides relatively low returns on capital. However, this is the primary value driver, especially in distress situations. Key routes and airport slots are also valuable monetisable assets for a distressed airline. In 2013, Jet Airways had sold three of its slots at Heathrow Airport to Etihad Airways for $70 million (approximately Rs 500 crore) as part of the transaction to induct Etihad as an equity partner. Similarly, in 2016, Air France sold the most expensive slot at Heathrow to Oman Air for $75 million (approximately Rs 525 crore). However, these slots are available for a limited period after an airline stops operating, so investors and stakeholders need to move fast to avoid value erosion.

The second part of the airline business is similar to a marketing-brand loyalty business such as timeshare and hotel chains. While this business has relatively higher return on capital, in times of distress, it tends to lose value rapidly.

Distressed Deals
In conclusion, one can expect the competition in the airline market to remain intense with every airline targeting a bigger share of the market. In a game of brinkmanship, each airline is bearing losses in the hope that competitors would make even bigger losses, become economically unviable and eventually exit. Unfortunately, a low-price structure in a high-cost environment has not been sustainable, and extended price wars could lead to a structural collapse of the Indian airline industry.

Airline transformations are difficult because the of the way the industry is structured; while unit revenues have declined over the past 20 years because of intense competition and commoditisation, the battle to reduce costs has also continually run up against volatile fuel prices and the substantial bargaining power of both labour unions and suppliers. One of the most common ways of transformation is through consolidation and subsequent restructuring. Many smaller airlines have been merged with larger airlines to cut costs, phase out unprofitable routes, and build up a larger fleet. These deals also provide us an indication of how distressed airlines have historically been valued by investors globally. Some of the notable deals in the distressed airline space globally and the total enterprise value (TEV) to revenue multiples at which they were closed are presented in the table below: 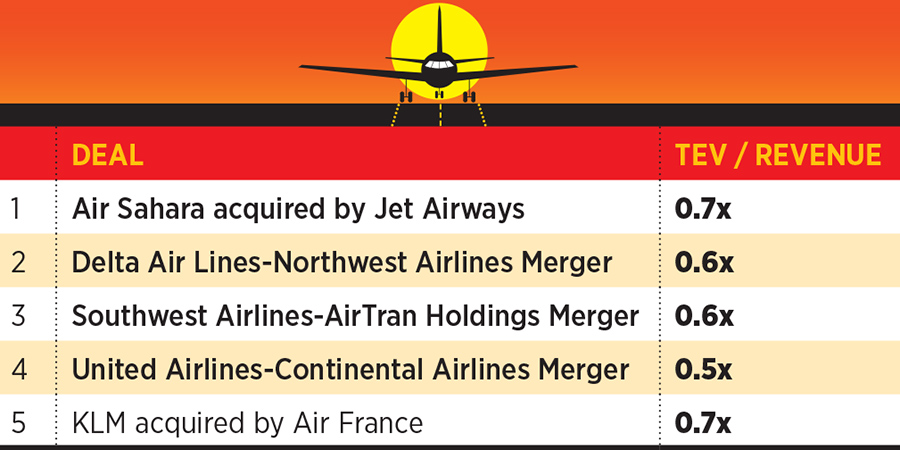 As is evident, the multiples are in a tight range (0.5 times to 0.7 times revenue). Understandably, this is lower than the median multiple of around 1.2 times for healthy airlines, implying a discount of roughly 50 percent. However, one must be careful in drawing any conclusions for the currently distressed Indian airlines because each transaction is very different from the other, and value declines rapidly once an airline stops operating.

9,413
Thank you for your comment, we value your opinion and the time you took to write to us!

Tweets by @forbes_india
Next
Can a GameStop happen in India?