Why Indian Women Leave the Workforce

World over women, unlike men, do not follow a linear career progression. A woman’s career has a far more scenic route, which includes taking time out, working part-time, reduced hours or flex- time for a number of years.

I'm a Delhi girl who managed to embrace the quirks of the South Indian way of life after moving to Bangalore. A sceptic but not a cynic, I'm lucky to have been a part of the Garden City’s journey from a sleepy paradise to a bustling high-tech metropolis. I'm interested in technology and business, education, social entrepreneurship and philanthropy. I began my journalistic career at A&M and passed through the portals of Businessworld and The Economic Times before coming to Forbes India. 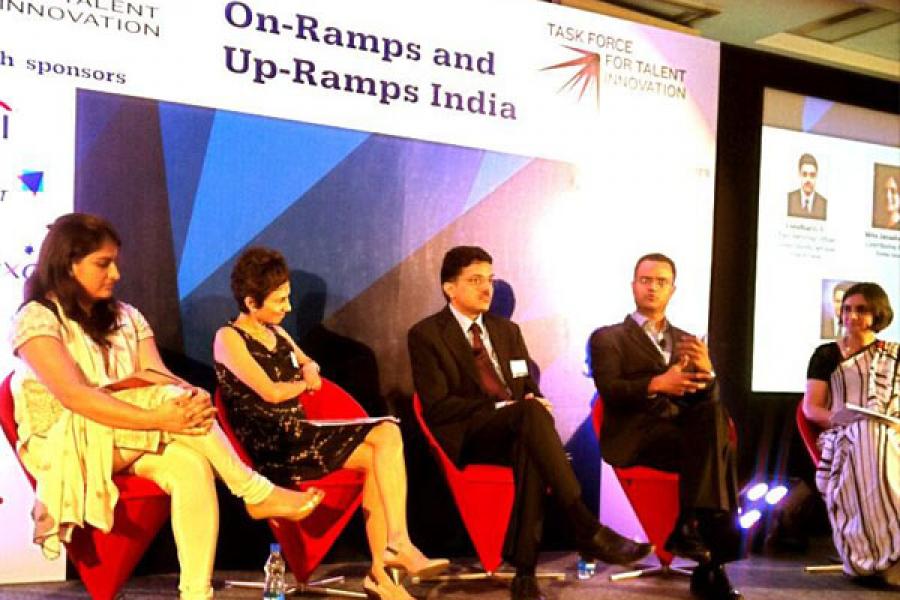 How to keep women from leaving the workforce has been a much-debated subject around the world. By now everyone knows the script, women join work in good numbers but very few make it to the top. At every step beyond, they either leave or get pushed out. The reasons are familiar - childcare, unfair share of domestic chores, gender bias at work, extreme work conditions, security and so on.

Women make up 24 percent of the workforce in India, which boasts of one the largest working populations in the world. Only 5 percent of these reach the top layer, compared to a global average of 20 percent. A recent study by Booz and company says that if men and women in India were to be equally employed India’s GDP could go up by 27 percent.

A new study by Center for Talent Innovation (CTI), founded by the vivacious Sylvia Ann Hewlett who is also a renowned advocate of diversity, and one of the world’s top 50 thinkers, throws new light on the subject. Hewlett has spent the last ten years trying to understand the impact of women’s career interruptions on earnings, aspiration and ambition. She has conducted the study in US, Germany and Japan. In 2012, CTI extended the research to India. 3,000 college graduates (men and women) were interviewed to understand why women go off work and what can be done to bring them back. Last evening Hewlett and her team were in Bangalore to release the report titled, On Ramps and Up Ramps India.

World over women, unlike men, says Hewlett, do not follow a linear career progression. A woman’s career has a far more scenic route, which includes taking time out, working part-time, reduced hours or flex- time for a number of years.

The report has some interesting findings. It says 36 percent of Indian women will take a break from work. The numbers are similar for Germany and US. But what is different is that Indian women stay out of work for much shorter duration, an average of 11 months compared to 2.7 years in US and 1.9 years in Germany. Almost 91 percent of women who take a break in India want to come back to work. 58 percent are able to rejoin full time work, higher than in Germany and US. Indian women also face smaller salary penalties as compared to their counterparts in US and Germany upon rejoining. However 72 percent of them in India do not want to go back to their previous employer.

What is very interesting is that while women everywhere seem to be taking breaks for childcare, in India a large number take time off to look after their elders. Almost 80 percent of women surveyed said they were leaving for eldercare, as compared to 30 percent in US and only 18 percent in Germany. A much bigger proportion of women in India, as compared to Germany or US, also leave because they find their careers stalling.

This is a double whammy, says Hewlett. “In India women have learnt to outsource childcare but not elder care. Daughterly guilt is now bigger than motherly guilt”. This is a wake-up call for organisations. While many organisations have been able to improve their policies related to maternity leave and a few have invested in building some infrastructure for daycare for children of employees, very few have found answers for women leaving work later in their careers be it for taking care of elders or because they find their careers stalling. This is the time when most women are peaking at their career and losing them hurts both the employers and the employees.

After Hewlett presented the study, I conducted a panel discussion around the theme with senior leaders from Goldman Sachs, Citi, E&Y and Genpact. All four companies were part of the `On Ramp Off Ramp' India study.

Although India Inc has been taking steps in offering flextime to its workforce, one of the panelists, Vaishali Kasture of Goldman Sachs, recounted an interesting case study of how some companies were willing to go to great lengths to protect their senior talent. Kasture is the MD of Investment Management Operations at Goldman Sachs in Bangalore, where she leads a team of 250 people. She has a 5-year-old son. She says that she never took a break in her 20-year-career, but when a family crisis hit last year she was forced to move to a flex-work-arrangement to devote more time to her son. She now comes to office three days a week and works from home the remaining time. Says Kasture, who has been at Goldman for only two years,  “It’s not like I have worked at Goldman for 10-15 years and had all the groundwork for taking such a huge step”. But as it turns out, Goldman trusted her enough to try it out. She says the hardest thing about this new arrangement for her was to let go, and realizing that leadership is not about being in the room all the time, but about empowering people and letting them to get on with their work.

“Such initiatives work only when senior leadership steps in, the message has to come from the top”, says fellow panelist Shweta Mehrotra, Head of HR, Operations & Technology and Global Functions, Citi South Asia.

What appeared during the discussion was that men too are looking for breaks from work, but are afraid either because of social conditioning or fear of not getting their jobs back. But change might be around the corner. Pankaj Kulshreshta, Senior Vice President, Analytics, Genpact says he has hired men who have taken a break in their careers at his organisation. Giridhar GV, the COO of Ernst & Young Shared Services in India gave an example of a colleague whose wife runs a successful pediatric service in one of Bangalore’s leading hospitals who took three years off to run the household before joining work at E&Y.

As is often the case these days, any talk of flextime work quickly turns to the infamous decision by Marissa Mayer of Yahoo who stopped this practice at her company. The trick, says Hewlett, lies in treating flextime as a reward rather than entitlement. “Offer it to your most talented performers rather than offering it to everyone” says Hewlett.

(Corrections; A previous version of the blog said that 39 percent of Indian women leave the workforce. The correct figure is 36 per cent)

26,308
Thank you for your comment, we value your opinion and the time you took to write to us!

Tweets by @forbesindia
Prev
I want to be happy too!
Next
Pain! What Pain?