Storyboard | At 71, Brand Modi has seen some Achhe Din 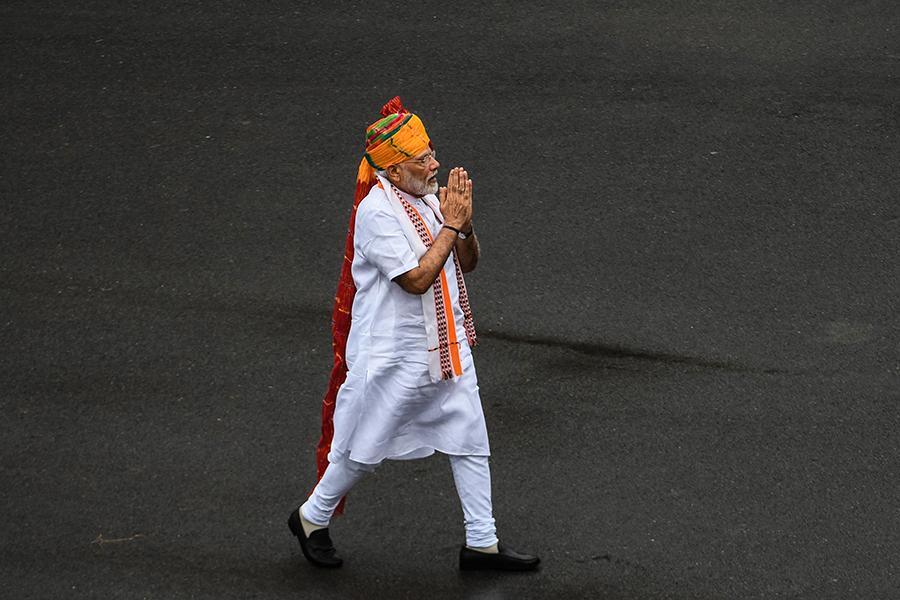 Brand Modi which arrived in 2014 has grown leaps and bounds and become truly international. From repeatedly featuring in the TIME Magazine's list of ‘100 Most Influential’ global personalities to making the Modi jacket a fashion statement, the Indian Prime Minister is adding to his brand value every day.

At 71, Narendra Damodardas Modi is still setting new trends, be it promoting yoga, introducing policies, appearing on Man Vs Wild, or simply by sporting a white beard. You can love him or hate him, but with his ‘Mitron’ sermons, Movado watches, rimless Bvlgari glasses, and of course the beard, you can’t really ignore him, say branding experts.

“The Modi brand is an easy brand to understand! First, the name is four letters and two syllables. A strong and easy name is always a good start. Today Brand Narendra Modi is a big name. Globally he is a strong leader who heads the largest democracy in the world. That status deepens as India emerges as one of the fastest-growing economies in the world,” says Harish Bijoor, brand expert and founder, Harish Bijoor Consults Inc.

In the domestic scenario, Modi is an image of “a strong leader with a strong sense of the direction he wants India headed. A headstrong brand of politics and governance. This image has deepened with the PM's new beard. In the style quotient of beards, it’s time to add a Modi beard now,” he adds.

With 60 million followers on Instagram, 71.2M on Twitter and 46 million on Facebook, as per digital ranking and analytics platform Checkbrand, Modi is on number one in the lists of top 100 online influencers and the most impactful online brands in India with a brand value of Rs327 crore.

“His publicity team sure knows how to start a trend. He is the first politician to send out personalised birthday wishes to anyone that has subscribed to any of his apps or online programs. While the receiver is aware that the messages are system-generated messages it still has a personal touch and a huge impact on his follower base,” says Advith Dhuddu, CEO of digital marketing and creative tech agency AliveNow.

His tweets and recorded videos are also strategically released on specific platforms with the target of generating maximum access and reach. “Just like his kurtas, his digital strategy is also tailor-made,” says Dhuddu.

Custom made or not, any news of the 71-year-old Indian Prime Minister sure has its way to take social media by storm. For instance, in July 2019 when Bear Grylls put out a tweet announcing ‘Man Vs Wild with Bear Grylls and PM Modi’ with the hashtag #PMModiOnDiscovery, the platform blew up with comments and shares.

As per global media intelligence firm Meltwater, in less than 12 hours the hashtag reached 204.2K mentions from 206.2K users.

Not just his appearance on TV, his sartorial sense has also been a hot trend. From the pinstripe bandhgala suit monogrammed with his name to the cashmere shawls he sports on suits during winters, Modi has taken ‘bespoke’ to a new level.

The popularity of ‘Modi jackets’ as they call it, has not just created a fad but also created an immense business for traditional wear makers. Turns out, there are brands that have started retailing only these jackets. NaMo by Katha is one such brand that sells merchandise inspired by Modi’s outfits.

Even fashion gurus are impressed. “Hon’ble Prime Minister Modi’s sense of style is entrenched into the Indian culture that sets a very individualistic sartorial choice. Donning his signature kurta and bandi, he has successfully prepared the narrative of India’s dressing on the world stage,” said popular celebrity designer Manish Malhotra.

However, every brand has its ups and downs and brand Modi is no exception. The 2020 pandemic has put brand Modi in a precarious situation, say some experts. “When Modi came to power in 2014, he was undoubtedly the biggest brand in the country and definitely trending globally too. From his speeches to his social media strategy everything worked in his favour,” says brand expert and CEO of TRA Research, N Chandramouli. The promise of Achhe Din was also “a game-changer”.

However, the pandemic has impacted his brand image. “Small factors like having the PM’s image on a vaccination certificate have taken away some credibility from Brand Modi. It’s like seeing Amitabh Bachchan in every ad. No one likes it that way,” notes Chandramouli.

Tarun Singh Chauhan, partner, TSC Consulting agrees. In his opinion, political leaders should be more understated. “His marketing strategy is surely impactful but it works for certain products and categories only.”

1,988
Thank you for your comment, we value your opinion and the time you took to write to us!

Tweets by @forbes_india
Prev
Storyboard | Mondelez and Ogilvy put a new twist to remake the iconic Cadbury 'Cricket' ad
Next
Storyboard | Cred to Cadbury, nostalgia in advertising should be handled with care