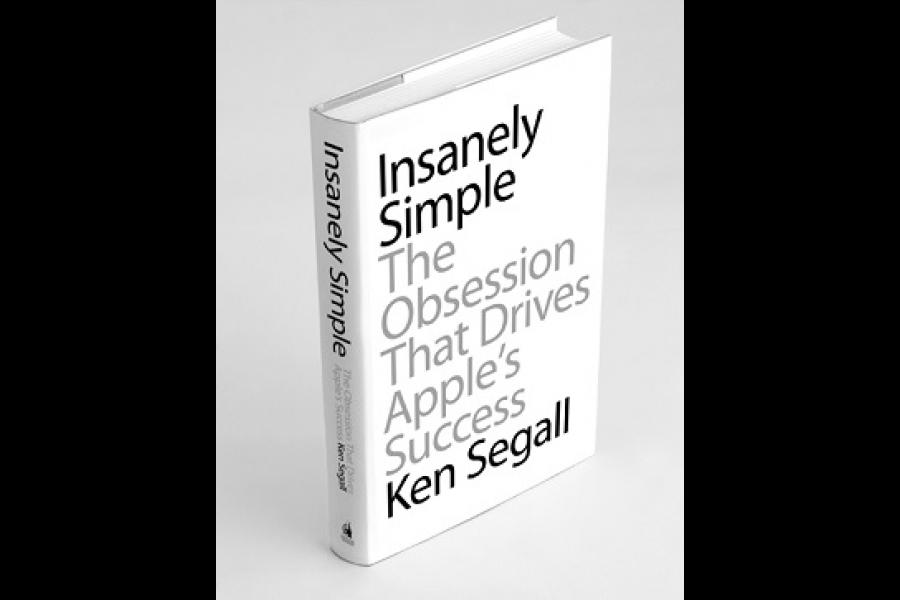 In Insanely Simple, Ken Segall argues that tireless pursuit of simplicity was not only at the core of Steve Jobs's philosophy, but also the secret of Apple's success, and that it can help you too. For Segal, Simplicity (with a capital S) is a universal value. He writes: "People of all ages, religions, cultures, and political beliefs prefer Simplicity. In fact, it’s not just human beings who prefer it. This preference is burned into the basic wiring of all living cells."

He gives ten principles - including  Think Brutal (or, be honest), Think Small (small teams work better), Think Minimal (communicate one message), Think Iconic (leverage an image that symbolises your idea) Think Casual (Operate like a small business), Think War (use all your ammunitions) - that can be applied profitably in any business.

It's an easy read, a book you can finish in one sitting. It's written engagingly, as if Segall is there next to you, reminiscing about Jobs and sharing the lessons he learned working with him. He worked with Jobs for over a decade, first when Jobs was running Next, and later when he moved back to Apple to launch one super-hit product after another, transforming the then-dying company into a phenomenal success. Through all this, Segall watched him from close quarters—to the extent his position creative director of NeXT and Apple's ad agency allowed—and helped Job create some of that magic. He was a member of the team that developed the Think Different campaign, and he is the guy who gave the iMac its name. (Steve Jobs was about to name it MacMan. More on that shortly.)

For all this, Insanely Simple follows the conventional, even clichéd, style of business books: big theme; recipe for success that connects to one big idea; beef it up with examples and confident claims. It follows this convention so much, that at times, I felt Segall was trying to force fit his thesis into that form. For example, one of the chapter title reads, 'Think Motion' and another 'Think Phrasal.' Hardly the kind of title one would expect from someone who co-wrote 'Think Different.'

The big theme here is, of course, simplicity, the single hammer that can solve all problems. As a message, it's great. It has the punch. Even as a goal, it's probably a good thing to have. But, as the predominant explanation for Apple's success, or as the single most important tool for success, I am not sure it's convincing enough.

Still, the book makes for an amazing read because of the anecdotes sprinkled through the book. They all centre around the complex personality of Steve Jobs. Some of these stories are both new and interesting. I have heard a lot about the persuasive skills of Jobs, and how his 'reality distortion field' works. But, how does Jobs himself get persuaded? I loved this scene from one of the early chapters. It's about an iMac commercial. Steve Jobs wants the commercial to say three or four important things. The agency, Chiat, feels it should project only one important feature. Jobs wouldn't budge. Segall writes:

Lee (Clow, leader of the Chiat team) tore five sheets of paper off of his notepad and crumpled them into five balls. Once the crumpling was complete, he started his performance. “Here, Steve, catch,” said Lee, as he tossed a single ball of paper across the table. Steve caught it, no problem, and tossed it back. “That’s a good ad,” said Lee. “Now catch this,” he said, as he threw all five paper balls in Steve’s direction. Steve didn’t catch a single one, and they bounced onto the table and floor. “That’s a bad ad,” said Lee.

When Apple was about to launch the iMac, Jobs had almost decided on naming it MacMan. Segall and his team didn't like the name. Jobs asked them to come up with something better, if they could; otherwise, he would go with MacMan. Segall and his team worked on it, and in the next meeting suggested alternative names, including Segall's own favorite, a name he had come up with: iMac. Jobs was not impressed. He said he hated them all. Segall went back to whiteboard, got a few more names, and included iMac again in it. This time Jobs seemed a little more receptive to iMac - he said he did not hate it anymore - but still preferred MacMan.

I’d like to say that there was some big turnaround after this point, one moment of glory that had us all high-fiving one another, but there was not. The very next day, while talking to one of my Apple clients, I learned that there was action on the naming front. Steve was making the rounds asking people what they thought of “iMac.” He’d had the name silk-screened onto a model to see how it looked.

I never heard another peep about this decision. Steve basically took it and ran. Obviously he liked what he saw when he got the model back, and he must have received positive reactions from his inner circle. And so, “iMac” it was."

Some stories don't offer insights into how Jobs worked, but are interesting because they are associated with the images we grew all up with. I particularly liked the part about how Segall made Jobs recite the 'Think Different' text. Finally it was Richard Dreyfuss who lent his voice, but the ad with Steve Jobs voice was released after his death. Here it is:

Segall is no Walter Isaacson, and he was not attempting to write a biography of Jobs. Insanely Simple is a business book, and Segall's objective is to tell us how Jobs pursued simplicity in all possible ways. He doesn't approach Jobs with the distance and scepticism of a journalist or with the sense of history of a biographer. His approaches is that of a student willing to learn, and keen to please his teacher. Yet, in telling us of the lessons he learned while working with Jobs, he has also drawn a profile of the man. Consider this from a chapter called Think Small. Here he talks about how Jobs preferred small groups in meetings.

One particular day, there appeared in our midst a woman from Apple with whom I was unfamiliar. I don’t recall her name, as she never appeared in our world again, so for the purposes of this tale, I’ll call her Lorrie. She took her seat with the rest of us as Steve breezed into the boardroom, right on time. Steve was in a sociable mood, so we chatted it up for a few minutes, and then the meeting began. “Before we start, let me just update you on a few things,” said Steve, his eyes surveying the room. “First off, let’s talk about iMac--" He stopped cold. His eyes locked on to the one thing in the room that didn’t look right. Pointing to Lorrie, he said, “Who are you?”

Lorrie was a bit stunned to be called out like that, but she calmly explained that she’d been asked to attend because she was involved with some of the marketing projects we’d be discussing. Steve heard it. Processed it. Then he hit her with the Simple Stick. “I don’t think we need you in this meeting, Lorrie. Thanks,” he said. Then, as if that diversion had never occurred--and as if Lorrie never existed--he continued with his update. So...poor Lorrie had to pack up her belongings, rise from her chair, and take the long walk across the room toward the door.

It's anecdotes such as these, and the personality traits and the habits that they are supposed to demonstrate, that form the moral core of business narratives. That theme is simple: good habits such as 'think small', 'think brutal' will lead to business success, and bad habits such as complexity will lead to failure.

There lies the problem.

We often confuse the cause and the effect. It's not that good habits lead to success, but it's success that makes us see some traits as good. For example, what we see as confidence in someone who is running a successful business, we see as arrogance the moment that business starts failing; what we perceive to be discipline in a successful enterprise turns into an inability to take risks in one that's failing; a discussion that's called frank and honest in a company on the way up tends to be seen as rude and vindictive when it's on the way down. Journalists, analysts and business writers are all prone to this mistake. It's far more common than one would imagine, as Phil Rosenzweig pointed out in his book The halo effect-- and the eight other business delusions that deceive managers.

But Jobs was different. His strengths and weaknesses were so extreme that they didn't lend themselves to the fallacy of special treatment in success or failure. We all know he was a jerk, and still he ran an amazingly successful business amazingly well. Which is why despite being so obviously in awe of Jobs, Segall often hints at the darker aspects of Jobs personality. And more than anything that he actually writes it's these references that hint at a bigger truth. It really took a very complex man to pursue simplicity.  Which is why Insanely Simple works better as a profile (even if it's a very limited profile) of Jobs, than as a business book that teaches you how to be successful.

4,530
Thank you for your comment, we value your opinion and the time you took to write to us!