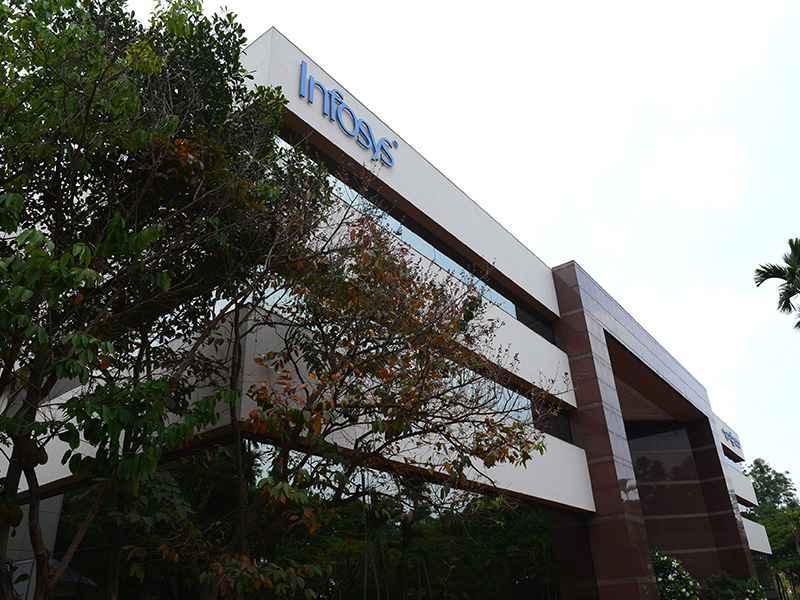 Image - Hemant Mishra/Mint via Getty Images
The shares of IT major Infosys suffered strong drubbing on October 22 after a whistleblower complaint alleged “unethical practices” by its top executives to boost the Indian software giant's profits and revenue.

The stock closed with a loss of 16.21 percent at Rs 643.30 on BSE, eroding its market capitalisation by over Rs 50,000 crore in a single day. This was the largest ever m-cap erosion in one session.

A group of Infosys employees has anonymously written to the US Securities and Exchange Commission (SEC), alleging that the IT major took unethical measures to boost profits and short-term revenue.

The employees, who call themselves &#8220ethical employees”, also sent the letter to the Infosys board, according to a report by The Economic Times.

The employees have accused chief executive officer Salil Parekh of bypassing reviews and approvals of large deals, the report said.

“He (Parekh) directs them to make wrong assumptions to show margins. CFO Nilanjan Roy is compliant and he prevents us from showing in board presentations large deal issues…several billion-dollar deals of last few quarters have nil margin,” the ET quotes the letter as saying.

The company said the matter had been placed before the audit committee.

Infosys will ensure that the complaint was investigated to the 'fullest extent', chairman Nandan Nilekani said in a statement to stock exchanges.

Parekh and Roy have been recused from the investigation into the allegations, Nilekani said. "The undated whistleblower complaint largely deals with allegations relating to the CEO's international travel to the US and Mumbai," Nilekani added.

The whistleblowers have also written to the US-based office of the Whistleblower Protection Programme on October 3, alleging wilful misstatement and accounting irregularities for the last two quarters.

Stating that in the last quarter, they were asked not to fully recognise costs such as visa costs to improve profits, the whistleblowers claimed. "We have voice recordings of these conversations. When the auditor opposed, the issue was postponed," they said.

Alleging that "critical information" was hidden from the auditors and the board, the letter claimed that in large contracts like those for Verizon, Intel and JVs in Japan, ABN Amro acquisition, "revenue recognition matters are forced which are not as per accounting standards".

However, Nilekani said the company had not been given emails or voice recordings as mentioned in the complaint.

"Post the board meeting of October 11, the audit committee began consultation with the independent internal auditors (Ernst &Young) on terms of reference for their prima facie investigation," Nilekani said.

Deloitte India, Infosys's statutory auditor, had been updated, he said.

About 1.4 crore shares worth over Rs 900 crore traded in multiple block deals on NSE and BSE.

While having equal weight rating on Infosys with a target price at Rs 805, Morgan Stanley said whistleblower news could put the stock under pressure, which came as a setback for the company.

The stock has been volatile over the last six years due to idiosyncratic issues, it added.

Jefferies said multiple whistleblower allegations were particularly related to large deals and the letter alleged that many of them had negligible margins.

According to the global brokerage house, the issue was likely to remain an overhang on the stock in the near term. Every 100 bps lower margin impacts FY20/21 EPS estimates by 4.3 percent, hence the P/E de-rating could be the bigger risk while the recent re-rating was driven by hopes of sustainable growth outperformance, it said

Credit Suisse also said the allegations could lead to a lot of uncertainty and the nature of accusations was serious. If proven, this could lead to the CEO and CFO being fired with potential SEC investigations, it said.

Disclaimer: The above report is compiled from information available on public platforms. Moneycontrol.com advises users to check with certified experts before taking any investment decisions.