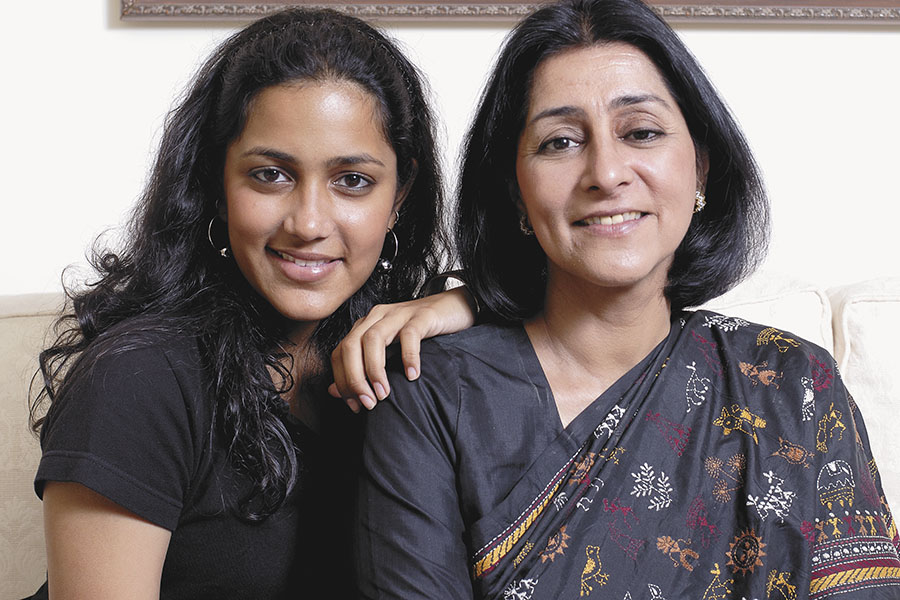 Naina’s achievements speak of a lot of hard work and, most important, of having delivered on all the responsibilities entrusted to her by her bank. She comes across as a very sound, solid leader with a bright mind and is a very good communicator. All this makes her a very valuable person for this profession. –Sunil Mittal

✦ ✦ ✦
When I meet Naina, she has, a few hours before our appointment, just got off a transcontinental plane. Her appearance, though, suggests no trace of it. Dressed in one of her trademark earthen-coloured tussar silk saris, she is a picture of elegance and grace. I ask her how she manages to stay this immaculate despite the fatigue of long-distance travel. “I guess I have been doing it for so long that it’s second nature to me,” she laughs and says.

The characteristic modesty camouflages a spine and spirit that has fuelled her rise to this prestigious office, and a three decade-long career that has set remarkable benchmarks along the way.

Naina’s professional journey has been one of firsts. She was the first Indian woman graduate from Harvard Business School; the first (of three) women to be employed by Pricewaterhouse [Coopers]; the first woman to head an investment bank and a foreign or private bank in India; and the first woman president of India’s largest apex chamber of industry—the 85-year-old Federation of Indian Chambers of Commerce and Industry (Ficci).

✦ ✦ ✦
The supersonic world of high finance has always fascinated me. As a little girl, I would spend hours with my father in the trading room in Kolkata’s stock exchange, watching the large TVs with scrolling news tickers; the glowing trading screens pulsing with rapidly changing numbers; the buzz and exhilaration of millions being transacted was addictive.

It is that same power and excitement that pulses through the HSBC building in Mumbai. At the India headquarters of one of the largest financial services organisations in the world, I am about to meet Naina Lal Kidwai, chairman, India, and director, Asia-Pacific. (Kidwai has since retired.)

Penchant for Excellence
As it is for most young girls, the strongest influence on Naina’s life was that of her father. Surendr Lall, popularly known as Bandy, was CEO of a leading insurance company, and it was during visits to his imposing office that the wide-eyed young girl decided that a corporate career was what she wanted. “Because he was at the helm ever since I can remember, it gave me a very good sense of what it was like to be at the top,” she says.

Hardworking and humble, Surendr was known for his high standards of integrity and humility and it was from him that she learnt most of life’s biggest lessons. “He would say that there will be times in life that you will not win. As long as you have done your best, the outcome is less important.”

But despite the learnings, winning seemed to come only too naturally to this young dynamo, as she was then.

At 11, while moving schools, Naina realised that in order to not just fit in, but also become a leader, she had to acquire new skills. After much hard work, she grew into the archetypal golden girl… consistently topping her class, becoming a champion sports person, an accomplished public speaker and finally heading the school as captain.

“When I first met her in school, she was undefeatable,” Mira Nair, a close childhood friend affirms.

In an era when Indian women stepping out of their homes to chart careers was impossible to imagine, Naina chose to leave the country in pursuit of her dreams and the vision she had for herself. “I believed I was capable, which gave me the self-confidence and guided me to new and better things.” As Mira corroborates, “Naina met with hindrances when she was entering the business world. Yet, she was clear that she wasn’t going to join the family business. She was going to do it her own way.”

Onward and Upward
After graduating from Harvard in 1982, Naina first contemplated working in the US, but she decided to return to India to join the investment banking division of Grindlays Bank. “I am sure the deals I would have worked on in the US would have been bigger—in billions rather than millions—but in India, there were many firsts—listings of companies, new entrepreneurs and the start of privatisation,” she says. After 12 tremendous years at Grindlays, Naina moved to Delhi as head of investment banking for north India, becoming the first woman in the country to do so. It was here that Naina met Rashid Kidwai, who was then the regional head of Clarion Advertising Services. “It wasn’t easy to convince Naina to marry me—I had to pass millions of tests, and had grazed knees!” Rashid says laughingly. “Our first date was at a bookstore as I needed to impress her, and our second at Bengali Market.”

A formidable name by now and sought after by almost every rival bank around, it was only a matter of time before Naina was hired by Morgan Stanley. She was to start up its investment-banking business, as it opened offices in India.

It was also at this time that Rashid and Naina had to make an important decision. “She was at a critical stage in her career and working in Bombay. So I decided to give up a good job offer in Delhi because we’d be living in different cities,” he says.

“The eight years when I was at Morgan Stanley were significant for India, as the country had just begun to open up and disinvestments were happening; also, a lot of new activities were starting in the capital markets,” Naina recalls. Her time at Morgan Stanley is also remembered for the joint venture she initiated in 1997 with Bombay-based JM Financial which later on came to be known as JM Morgan Stanley.

Towards Consolidation
In 2002, Naina was headhunted by HSBC. In another five, she was made CEO of HSBC in India, becoming the first woman and second Indian to head its operations in India, as well as the first woman to head a private or foreign bank in the country. Two years later, she took charge as country head of India, overseeing all entities of the bank in India and the group’s global resourcing business comprising 35,000 people—almost 12 percent of the group’s global employee base.

Analysing Naina’s contribution, NR Narayana Murthy, Infosys founder and one-time board member of HSBC Holdings, sums it up to perfection: “Naina came in as the head of HSBC at a very crucial time in the history of post-1991 Indian banking. She had to win her colleagues’ confidence, push them towards innovation, help them create differentiation and make HSBC more successful.” This was at a time when it was not easy for a foreign corporation to operate successfully in India. “But, through her endeavours she demonstrated that the heart of HSBC is with India. They are interested in making this country a better place and interested in serving the poor. Like Hindustan Unilever, HSBC has been successful in winning the hearts of many Indians and this has happened because of Naina’s personality.”

✦ ✦ ✦
Through our correspondence, I remain both in awe of and moved by the enormity of Naina’s accomplishments. At heart, she remains tastefully Indian and yet, has built a globally-applauded career as a trailblazing dealmaker and highly-respected CEO of an international bank, one of the most influential women in business and a trusted advisor to the world’s rich and famous.

What is the legacy she would like to leave behind, I ask her. Her answer is evocative and inspiring—“I would like to have mentored a number of young people, particularly women, through their careers, inspired women to strive and achieve… and worked with those who are less privileged.”

A pioneer, she turned down the best international jobs to return to India because her heart was set on working in her own homeland. She is a nonconformist, who finds time for social causes and turns every adversity into an opportunity. A feminist in the best sense of the word—a doer, not a preacher—Naina Lal Kidwai is a woman of substance.