The latest from Apple is the lightest ever 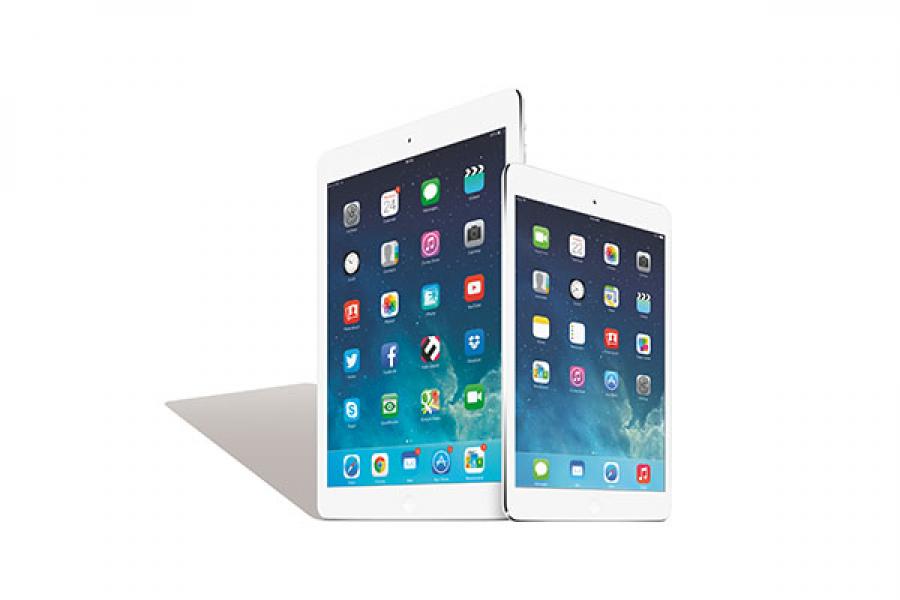 On October 22, a new iPad was born and announced live to the world. Amid a barrage of stats, warm words and mild patronising of “confused” Android rivals, the stylish tablet arrived with a brand new name, too: The iPad Air.

Apple’s full-sized, 9.7-inch iPad has been given a design overhaul and, as the moniker suggests, it’s thinner, lighter and more tapered—like the MacBook Air—than ever. There is a retina display and the bezel around it has been slimmed down, making this fifth-gen iPad 20 percent thinner than before. It has also had 45 g shaved off the weight, making it the world’s lightest full-size tablet, though we’ll see how long Samsung, Amazon and Sony allow that to stand.

The Air still boasts the same sturdy aluminium unibody, now in space grey or silver, and it hasn’t slacked off in the spec department, with the expected bump to the same A7 processor and accompanying M7 co-processor as on the iPhone 5S. That means you’ll get the full 64-bit slice of iOS 7 and less battery-sapping access to apps that rely on sensing motion, such as fitness monitors.

The camera still delivers five-meg/1080 p goodness, but now works with the A7 processor to take better pictures and videos. There’s also an HD FaceTime camera up front, with dual mics for clearer video calling. Despite this, Apple claims to have kept the battery life at 10 hours. Storage options remain the same—16GB, 32GB, 64GB or 128GB in Wi-Fi-only or Wi-Fi + cellular.

After waxing lyrical about the iPad Air, Apple chief Tim Cook wasn’t ready to get off that stage in a hurry. There was the small matter of an updated iPad Mini to discuss. Rumours had suggested that it would sport a retina display and, predictably, they were spot on. The new Mini’s screen is the same 2048x1536 resolution as the Air, but shrunk to 7.9 inches, which means a higher ppi count. It weighs in at 331 g and is just 7.5 mm thick.

Following the theme of delivering iPad Air-matching specs in a smaller package, the new Mini has the same A7 and M7 processing double-team—Apple reckons it’s four times faster than the original Mini. There’s also what appears to be the exact same cameras as the Air and you can now choose a 128 GB model if you so wish. Colour options? Space grey and silver, again. We spy a theme…

So which will it be, Air or Mini? Or neither of the above?

Courtesy T3 (This material is reproduced from T3 magazine and is the copyright of or licensed to Future Publishing Limited, a Future plc group company, UK2010. Used under licence. All rights reserved.)