After a year in deep freeze, private equity will flow again in 2010. Private equity firms in India will really need to differentiate themselves to get more respect from Indian promoters and make some serious money. Till now, PE firms here have punched below their weight

No. of Indian companies that received private equity funding
Guess which country in Asia has received the maximum private equity flows since 2004. China? Australia? Well, it is India. PE firms have invested $44.8 billion, which is $200 million more than what they invested in China during the same period. Now even though more than 1,300 companies have accessed this form of capital, PE firms have yet to make an impact proportional to their size in India. “PE firms have to find a place that defines them clearly in universe of financial entities like public markets, QIPs, banks and hedge funds that are present in the Indian market,” says Sri Rajan, partner, Bain & Company. 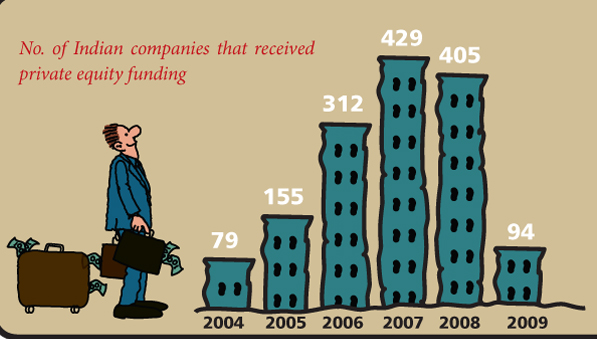 Average stake of PE firms
One of the biggest evidences of the limited impact of private equity in India is the average stake that they hold in companies. The last five-year average is 22.5 percent. One can argue that stake percentage doesn’t matter. Since most PE firms get a board seat they can influence decision making. Example: Bharti Enterprises. But such cases are few. And in many cases buyouts in which a PE firm has control and is able to improve performance have netted big returns. ICICI Venture’s success with Ace Refractories, Infomedia and VA Tech show that. It’s not that firms with less stake can’t add value. “I have seen PE firms with just 10-15% help transform companies,” says Sri Rajan. 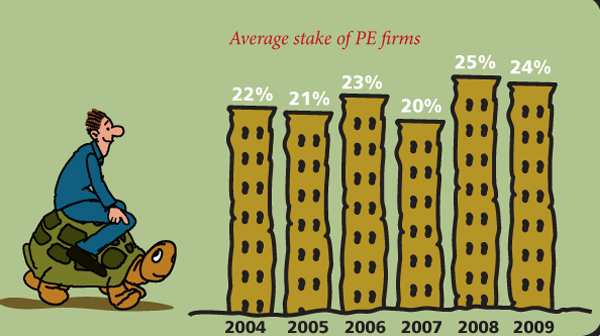 Transaction value of PE exits (in $ billion)
Firms in India have not demonstrated a consistent record of delivering huge returns. Amounts realised through sale of these investment are fairly small. Only in 2005 when Warburg exited Bharti did this amount go up. “The peak years have been 2007 and 2008. So the exit years for these investment are still many years away,” says Sri Rajan. Of course, the fact that such large sums of money got invested at the peak of market valuations also means that there is a huge risk that PE firms will make a lot of money from their investments in 2007 and 2008. 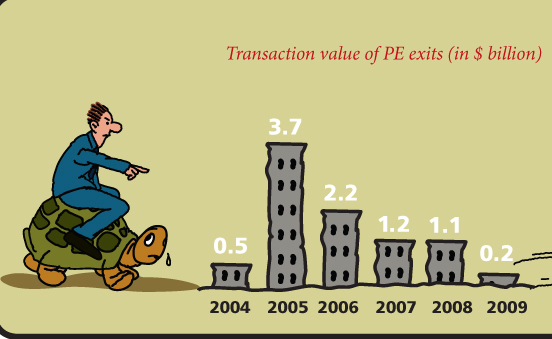 Tweets by @forbesindia
Warming It Up
Chequed Out