While the government didn't go the whole hog, the budget furthers the manifesto of growth, governance and transparency, say Deloitte India partners 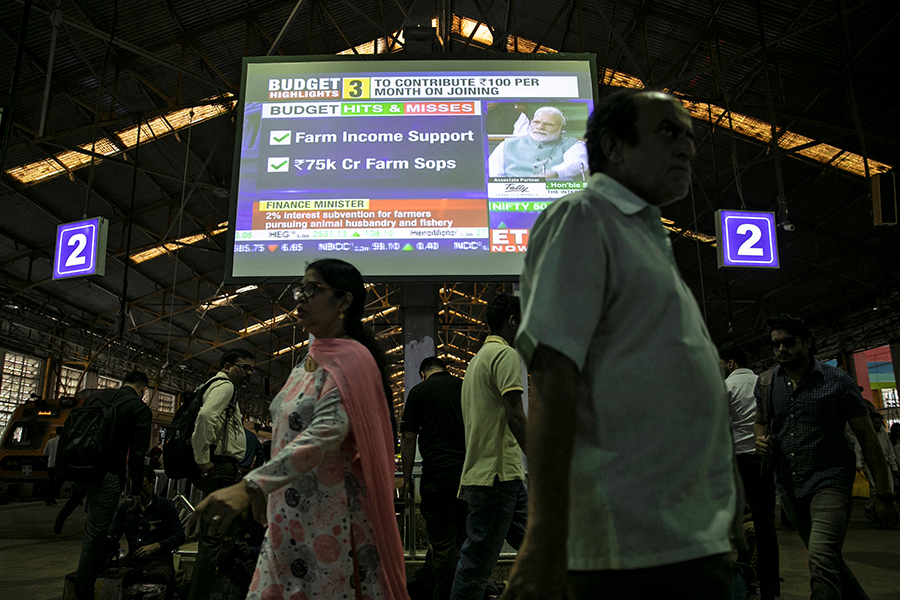 Image: Danish Siddiqui / Reuters
Q. What were you expecting from this budget?
Agrawal: We were expecting something more than the usual vote-on-account, based on the media buzz. Then towards the middle of the speech, we were wondering if this was going to be an anti-climax, and then finally we did get the sops that were expected. So, the Minister of Finance has delivered on some of the expectations. But given that it was the final budget [before the Lok Sabha elections] the government did not go the whole hog.

Kamdin: If you go by the budgets that were presented in 2004, 2009 and 2014, there were interim budgets. So that is what we expected. However, as the FM kept speaking, we began to expect that this would be a vote-on-account, but then he has given a reliefs and reforms. So it has met some expectations of the people and the corporate world.

Q. What is the biggest takeaway for you from this budget?
Agrawal: It is definitely the tax rebate for income up to Rs 5 lakh. In terms of the number of individual tax payers who would be impacted by the several measures, this would be the biggest one. All individuals with taxable income up to Rs 5 lakh will get a tax rebate. They need to keep filing their tax returns but they will get a full rebate.

Q. With regard to the measures that Mr Goyal announced for the farming community, what kind of pressure do you think it is going to put on the exchequer?
Agrawal: This year, they have provided Rs 20,000 crore for the Pradhan Mantri Kissan Saman Niddhi Yojana, and Rs 75,000 crore for the 2019-20. This would be for the Rs 6,000 direct bank transfer for small farmers. For the social security scheme for people in the unorganised sector, the government has already allotted Rs 500 crore in the current year, up to March 2019. Mr Goyal also mentioned that the fiscal deficit target should more or less be met. So it remains to be seen how they are going to do this.

Q. If this government comes back to power, is there more that it can do to provide tax relief?
Agrawal: Let’s say that as far as tax sops are concerned, there will probably not be any more if they come into power. But perhaps as far as improvement in administrative processes are concerned—and he did allude to a couple of them—we may have more of those, since they will have a horizon of another five years to go through with those changes.

As far as the tax laws are concerned, we will have the report put out by the committee that is reviewing the tax code, and we could have the opportunity for the public to give their comments. This could have some impact on the proposals from the new government.

Q. Is there a change in the structural theme of the Budgets? Is the government saying that they have addressed the needs of the low-income groups, and now we are moving to the middle class?
Kamdin: The direction is right, and the intent has always been correct. They have tried to address major issues such as corruption and black money. However, there is something more that can be done. Currently, the concept of the basic universal income in India has been linked to farmers and farmers who own land. But there are many who are not farmers; and there are agricultural labourers who don’t own land and are very poor. The government needs to take steps to provide for them.

Globally, the concept of the universal basic income has been discussed to see how we can bridge the gap between the very rich and the very poor. So every person would have the right to a basic income, and it is not conditional on being a farmer or worker.

Q. Try and explain what the five-year journey has been for the current government, where taxes are concerned…
Agrawal: Initially, when this government came in 2014, they brought in three changes from the perspective of the individual tax payers: Deduction on interest from house property went up to Rs 2 lakh, the deduction under 80C went up to Rs 1.5 lakh, the income level for tax exemption went up to Rs 2.5 lakh. Then during their tenure, the government replaced the 10 percent tax rate by 5 percent, for the first slab.

So compared to the amount of tax that these individuals were paying when the current government had taken over five years ago, it’s quite interesting to see that other than the highest income brackets, the low and mid-income groups have saved taxes. The government has adopted a progressive to taxation, even when it comes to deductions and exemptions, not only for the slabs and rates, but also for a broader law provision.

They have stuck to the simple approach that if we increase the basic exemption limit, then individuals who drop off the radar will not do so.

Q. When we look at the financial markets, there are a few changes related to stamp duties. Can you take the journey back for the government?
Kamdin: They have proposed a uniform stamp duty. In India, we have national and state-wise stamp duties. In case of the securities market, there was a lower stamp duty applicable in North India, than say in Maharashtra. So a lot of trade were being booked through the northern states, rather than through the states where the entities were. This is what they are trying to streamline, with only one stamp duty throughout India, and then the states would be allocated their revenues. This is similar to GST and will have its benefits.

We have to read through the nuances of the Bill, but we understand is that it is applicable only to shares, while debentures are not going to be covered. It will be enacted once the budget is passed by Parliament.

The market, from 2014 till date, has grown nearly 63 percent. FDI has been increasing, which is a good sign. Last year, Foreign Portfolio Investments (FPI) was a negative. It’s a global trend, and investors will be watching out till the election. But overall, FDI has been growing.

Q. What would you want from this government if they come back?
Agrawal: They had announced a change to National Pension Scheme (NPS)—which was welcome—by which they had increased the exemption when you make a lump sum withdrawal on retirement, to the entire 60 percent that you could withdraw; earlier, the exemption was limited only to 40 percent, whereas you could withdraw 60 percent, with the balance going into annuity.

This provision does not seem to have found its way into the finance bill, and perhaps we will subsequently see an amendment to incorporate that. The NPS has certainly been made more attractive for investments by this government.

The government has introduced some tax reliefs for even the middle income group, which might have felt left out in the last two or three budgets. So, not tax on notional rent from second property and the capital gains tax exemption for up to Rs 2 crore (if you invest in two properties).

Kamdin: From the corporate perspective, they have reduced the corporate tax rates from 30 to 25 percent. The number of companies they have covered is huge, but the impact is not very significant. They have divided distribution tax as well, which is very high. That has to be reduced. Also, foreign investors don’t get credit in some cases, for this tax. This ask has always been there.

There should be some relief for securities transaction tax. We were expecting a reduction on derivatives or otherwise, but nothing has come.

On the NPA situation, there was a lot of expectation that the securitisation income that investors receive would get a relief and would be taxed at 5 percent. This too has not come through.

I would like to add, however, that the budget is furthering the manifesto of growth, governance and transparency.