How will the progress of IT and automation change the working world? 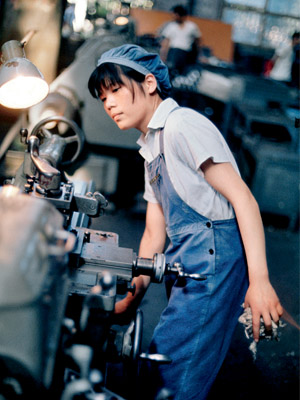 In 1988, Harvard Business School Professor Shoshana Zuboff predicted that the working world was on the verge of a revolution in which many jobs would be “informated”–automated and computerized in ways that would greatly extend human capacities even as it dumbs-down the level of skill required to perform tasks.

Ahead of her time in many ways (Zuboff was one of the first tenured women at HBS), her thoughts on automation were prescient in many ways. Today, however, the picture of the future Zuboff painted in the book In the Age of Smart Machines: the Future of Work and Power, seems conservative, even quaint. Robots have taken over operating theaters and are performing complex surgeries with precision. In over 6 million households, Roombas – automatic vacuum sweepers – have replaced the cleaning woman. In some places, robots are letting people attend meetings and oversee the work of subordinates a world away. Many factories are entirely automated.

And it’s not over yet: some futurists claim that within 20 years, computers will be smarter than we are in every respect. Relatively soon, they say, the routine work that has always kept humanity occupied will be on its way out, creating a world of new risk and new promise – and nowhere more acutely than in dynamic economies such as China.

As more and more work is automated and even some traditional professions face mechanization – IBM, for instance, is now working with John Hopkins University in Baltimore, Maryland, on a voice-activated physician’s assistant – futurist Martin Ford envisages a world where the robots will take over three-fourths of all human labor.

A Californian software company owner who has seen his own business become more automated over the last 20 years, Ford has become increasingly convinced that smart machines could undermine the entire global economic structure. In his book, The Lights in the Tunnel: Automation, Accelerating Technology and the Economy of the Future, Ford argues that because the world’s economy depends ultimately on consumption, a lack of work will eventually cut many people out of the economy.

Just as agriculture in most developed countries is now almost entirely mechanized, other kinds of production are becoming increasingly automatic. In the factories, products are “getting smaller and smaller, they’re miniaturizing, and it’s pretty clear that these things are so miniature and so precise that there just isn’t a place for human beings anymore,” he says. “…it’s getting to the point where people simply can’t keep up.”

In the past, this has always been okay for workers in the end: more work for the machines has meant cheaper goods and services for everyone. But Ford argues that this time it’s different.

But that’s not going to happen now, he says, because routine work itself is going away.

Certainly from the view of an American software developer, it’s easy to make the case. In the US, for instance, classified newspaper advertising, an advertising medium that once employed tens of thousands of people, has been replaced over the past decade by the Internet, principally job search site Monster.com, the eBay auction site, and most impressively, Craigslist – which is said to employ only 30 people or so. The financial world too is increasingly automated: approximately 70% of US stocks are bought and sold in a transaction that involves no human being either buying or selling.

During this period, productivity has climbed at an annual rate of 2.8% a year since 1995, according to US government statistics. However, although many American companies are in excellent financial shape and more profitable than ever, wages have stayed flat except at the very top. Indeed, the popularity of the slogan of the Occupy Wall Street movement – “We are the 99%” – suggests that even the general public is now aware of this trend.

As society divides between a few machine-masters and the rest of humanity Ford argues that massive unemployment is now inevitable. And with no way to pay for anything, even cheaper goods and services will be out of reach.

Dog’s Best Friend
Others believe labor’s fate won’t be so dire. For one thing, it can be difficult to automate some complex processes. Warren Bennis, the management guru, might joke about workerless factories (“The factory of the future will have only two employees, a man and a dog. The man will be there to feed the dog. The dog will be there to keep the man from touching the equipment.”), but Serguei Netessine, a professor of technology and innovation at INSEAD in Fontainebleau, France, says that complex processes are often surprisingly difficult to mechanize.

For example, Netessine cites the surprising evolution of e-commerce. In the dotcom era, many investors assumed that online retail would be much cheaper, in part because of salary savings. In fact, online stores tend to have roughly the same percentage of salary costs as brick and mortar stores. At Amazon, for example, people might imagine that the distribution is entirely automated, Netessine says. “Actually, this is not true,” he says. “If you go to an Amazon warehouse, there is almost zero automation. It’s all people walking around with pushcarts and collecting orders of customers.”

The people aren’t there for sentimental value. Instead, Amazon found that it was more cost-efficient to give people carts than to automate a line, because people had an easier time keeping up with constantly shifting shelf arrangements. “What Amazon figured out a long time ago is that humans are so flexible, it’s very hard to justify buying robots to do the same thing,” he says.

For another, there are certain things that only humans can do. Sales, for instance, is hard to automate in some categories, Netessine says. Certainly, it’s possible to reduce the number of sales people but this can be a very counterproductive strategy, particularly with respect to luxury goods and complex products.

Rather than replace sales people with self-checkout counters and fast-talking robots, computers might also be used to make sales people more effective. For example, Netessine and an associate have worked up a better system to track and allocate sales talent. His program ensures that the best sales associates are working at the most optimum times, for instance, and that the best waiters are given the best shifts.

This might sound elementary, but although good analytics exist to track the impact of advertising and promotion on sales, the level of understanding about the performance of individual sales people is still relatively limited. “We still know very little about sales and customer interaction,” he says.

What’s Next for China
For China, automation is also likely to be both threat and opportunity.

On the threat side is the prospect of high levels of factory automation. Foxconn, the Taiwanese tech giant, for example, announced last year that it intended to increase the number of robots in its factories from 10,000 to 1 million within 3-5 years, replacing up to 500,000 of the company’s 1.2 million workers, performing routine tasks such as spraying, welding and assembly.

For other industries, the message is more mixed. Progress is likely to neutralize more of the labor cost advantage Chinese manufacturers have had with respect to the West – cheap robots tend to trump cheap workers, in the end.

On the opportunity side, the country is investing now in a massive research initiative designed to put it at the forefront of the Internet of Things, the networking of more and more objects to the Internet, which some experts see as a key enabler of the next wave of automation.

With support at the highest levels of government – Premier Wen Jiabao has even given a number of speeches on its importance to China’s economic future – research on the Internet of Things is now a high priority. From agriculture to finance, Premier Wen and other Chinese officials have argued that the increased ability to track and monitor products and progress is likely to make many industries much more efficient and reliable than they are today, and made building a RMB 500 billion Internet of Things industry a key goal in the current five-year plan.

However, the new digital tools also create new possibilities. Small companies can extend their capacities with software and cheap communications. Hal Varian, Google’s chief economist, talks about the amount of “recombinant” technology out there now: powerful tools that are available to everybody, regardless of scale, that can be put together in novel ways. Between those tools and easy communication, we’re now entering an era of the micro-multinational, he predicts.

For such companies, location doesn’t matter. “You have never heard of most micro-multinationals and likely never will; like other small firms, most will go out of business or be acquired by larger organizations,” Varian has written. “But some, like Skype (from Estonia) or Rovio, the maker of the popular mobile-device game Angry Birds (from Finland), have become household names.”

On balance, Varian predicts that these cheap technologies will lead to advances in the developing world as well, sooner or later. “Over the past 300 years, technology has dramatically improved the quality of life for the world's developed economies. Now the rest of the world will get its turn,” he writes.