Even as case numbers rise, ships keep sailing and guests keep embarking, adamant that the onboard environment is safe because of stringent health and safety requirements, including pre-departure testing and vaccine mandates 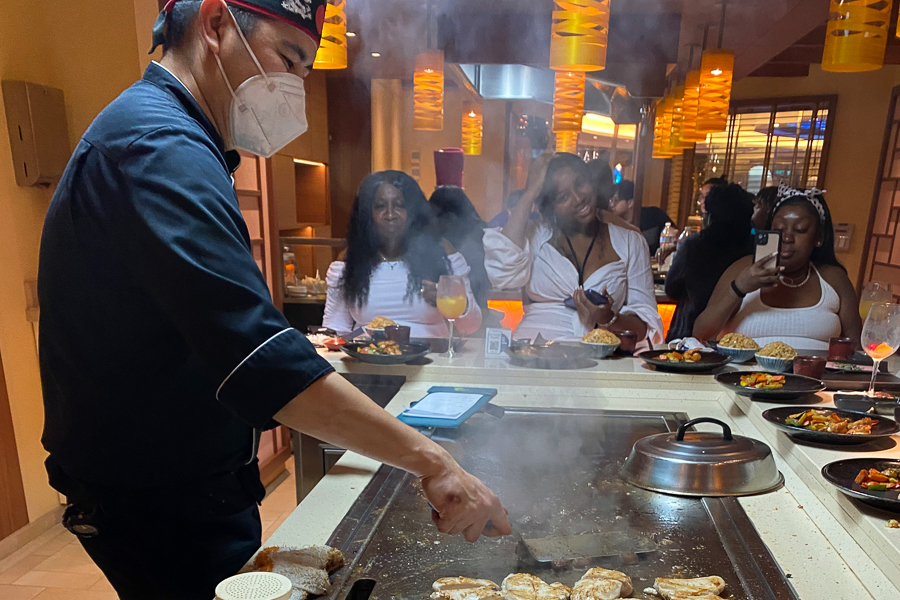 A photo provided by Jesse Suphan shows guests dining onboard Carnival Cruise Line’s Panorama. Some passengers are starting to question the effectiveness of health and safety protocols on ships, and say they aren’t being informed of the full extent of coronavirus cases. Image: Jesse Suphan via The New York Times

On the fourth day of a seven-day Mexican Riviera cruise, Jesse Suphan and other passengers onboard the Carnival Cruise Line’s Panorama were denied entry at the port of Puerto Vallarta, because of the number of onboard coronavirus cases. That was the first Suphan heard about the virus spreading on the ship.
“The captain announced that five people had tested positive for COVID and were quarantining,” Suphan, a 39-year-old revenue cycle manager, recalled in a telephone interview. “But, then, talking to the crew, they told me there were between 100 and 150 crew members who also tested positive, but the captain didn’t mention that.”
Two days later, the Centers for Disease Control and Prevention told Americans to avoid travel on cruise ships, regardless of their vaccination status. The advisory, the agency’s highest coronavirus warning, came in response to a surge in cases in recent weeks, caused by the spread of the contagious omicron variant.
But even as case numbers rise, and criticism mounts about the safety of cruising and over cruise line protocols in reporting cases to passengers, ships keep sailing and guests keep embarking, adamant that the onboard environment is safe because of stringent health and safety requirements, including pre-departure testing and vaccine mandates.
Consider the New Year’s Eve festivities held on ships around the world. One day after the CDC announcement, as dozens of crew members and other passengers were confined to small cabins, infected and quarantined, thousands of revelers packed into ship bars, casinos and deck venues, partying like it was 2019.
Harvey Freid, 56, recently returned from a 17-day sailing to Antarctica, during which one positive case was reported. But Freid, an avid cruiser, is undeterred and is scheduled to go on a Caribbean cruise in late January.
“The cruise ships do a very good job of handling COVID, and I think it’s safer than my building in Miami and most places that I go on land, because people are vaccinated and cases are quickly identified and isolated,” he said.
On Wednesday, Royal Caribbean and Norwegian Cruise Line canceled several voyages in response to the growing number of coronavirus cases onboard some of their ships.
The cruise industry’s trade group, Cruise Lines International Association, called the CDC’s warning “perplexing,” and said that cases identified on ships “consistently make up a slim minority of the total population on board — far fewer than on land.”
“No setting can be immune from this virus — however, it is also the case that cruises provide one of the highest levels of demonstrated mitigation against the virus,” the group said in a statement.
But some passengers are starting to question the effectiveness of health and safety protocols, and say they aren’t being informed of the full extent of coronavirus cases on board. They say they learn of the positive cases only after returning home and would have been able to make more informed decisions about their behavior and participation in activities, if they had been made more aware.
When Suphan booked his vacation, he felt confident that Carnival had good protocols in place, which included pre-departure testing and requiring vaccines for all crew and most passengers. But as the ship sailed, Suphan was surprised by the number of people he met who said they had been exempted from the vaccine mandate. He said there were not enough crew members to enforce indoor mask rules for more than 3,000 passengers on board.
Carnival said only a small number of passengers had been exempted from the vaccination requirement, but did not specify how many.

Most major cruise lines do not publicly announce the number of coronavirus cases on board their ships, but they are required to submit daily figures to the CDC. Currently, the agency is monitoring more than 90 cruise ships, because of reported cases that have reached the agency’s threshold for an investigation. (An investigation is undertaken when a certain number of cases is reported among a percentage of passengers.)
Carnival has denied that the number of infected crew was as high as 100 on Suphan’s sailing, but has not disclosed the total number of people who tested positive. On Dec. 28, when the cruise was denied entry to port, the Jalisco state health ministry said 69 cases had been detected among the ship’s 1,450 crew members. That day, Christine Duffy, the Carnival president, called into the ship and briefed guests on the situation. Passengers said she did not give updated figures for positive cases, which many found concerning.
Chris Chiames, chief communication officer for Carnival, said the company takes its responsibility for public health “very seriously” and has implemented protocols that exceed CDC guidance since restarting operations in the United States in June.
“The extreme majority of the crew who test positive are asymptomatic and detected through the random testing protocol, and they and their close contacts are put into isolation or quarantine,” Chiames said. “None have required escalated medical attention or hospitalization, and we have also moved most crew off the ship to complete their isolation or quarantine.”
Carnival declined to comment on its policies for reporting daily cases to passengers onboard its ships, but Chiames said, “the additional complications caused by the fast-spreading omicron variant will require us to evaluate how to communicate moving forward.”

For many, the idea of testing positive for the coronavirus on a cruise ship conjures up the horrors of the major outbreaks in the early stages of the pandemic, when thousands of people were confined to their rooms for endless days while the pandemic raged through the ships.
The health and safety protocols that allowed U.S. cruise ships to restart operations in June have helped cruise lines contain the virus and avoid large outbreaks, and until now, many of the small percentage of guests who tested positive during sailings have been satisfied with the handling of their cases. Some even received complimentary food and Champagne in their rooms and were flown home by charter plane.
But since more contagious variants like delta and omicron have emerged, causing cases to increase among passengers and crew, guests have started to complain about quarantine conditions.
Richard Lewis, chair and CEO of Savile Row Travel group, recently caught the coronavirus during two back-to-back Caribbean cruises with his family on board Celebrity Apex. It was his first cruise during the pandemic and initially, the protocols met his expectations and the experience felt relatively normal.
On day two of the cruise, the captain announced that there were two coronavirus cases on board the ship, which Lewis appreciated for keeping him informed. But there were no further announcements for the remainder of the week. That is when both he and his family started noticing changes.
“The staff were masking up a heck of a lot more, social distancing was being enforced between passengers and things did not seem right,” he said. “As we moved into the second week, some of the staff we became friends with disappeared and we found out they had gone into isolation. Then I started developing symptoms and tested positive and that’s when it became a nightmare.”
Lewis was moved from his “concierge class infinite veranda cabin” room to a standard cabin allotted for quarantines, which he said had a slightly oversized porthole and no fresh air. He had been under the impression that he could quarantine in his own room, saying the cruise line encourages people to book bigger rooms in the event that they will have to isolate.
Celebrity Cruises said its policy from day one was to move coronavirus-positive guests to a quarantine zone. Those identified as close contacts are permitted to isolate in their state rooms for 24 hours while they are tested and await results.
“Even the food was hideous,” Lewis said, sharing a picture of fried eggs, hash browns and bacon strips in a takeout container. “The first two meals were cold and appeared to have come from the crew canteen. It was only after I kicked up a fuss that I was allowed to order from the regular room service menu.”
That day, the captain announced that there were five coronavirus cases on board, but when Lewis pressed the doctor who visited him, he says he was told there were 16 cases.
“I know the cruise industry has suffered and I’m so supportive of getting travel back to normality, but there’s a serious lack of transparency and covering things up, and hiding them away is not going to help people make informed decisions,” Lewis said. Royal Caribbean Group, which owns Celebrity Cruises, said that passenger and crew members are informed when a threshold of virus cases has been met or exceeded.
“Publishing a dashboard of daily cases to all persons onboard is a less meaningful public-health mitigation measure than reinforcing continuous adherence to our industry-leading health and safety protocols, which has resulted in lower prevalence rates onboard than those found shoreside,” the company said in a statement.
Milly Parkinson, 28, developed coronavirus symptoms one day after returning from an eight-night Caribbean cruise with friends on board Royal Caribbean’s Odyssey of the Seas. While more than 50 people tested positive for the virus on board the ship, Royal Caribbean, like most cruise companies, does not require passengers to test before disembarking at their final destination.
“I took a test because I had symptoms, but think of all the people who were asymptomatic who just walked off the ship straight into the grocery store, a restaurant or a nightclub,” Parkinson said.
“We booked the cruise because we were convinced it would be a fun, safe bubble of vaccinated people,” she said. “But who were we kidding? There’s no place to escape omicron.”

Tweets by @forbesindia
An Eye-Opener For All Smartphone Users
In a race to shape the future, history is under new pressure