Inside the minds of venture investors 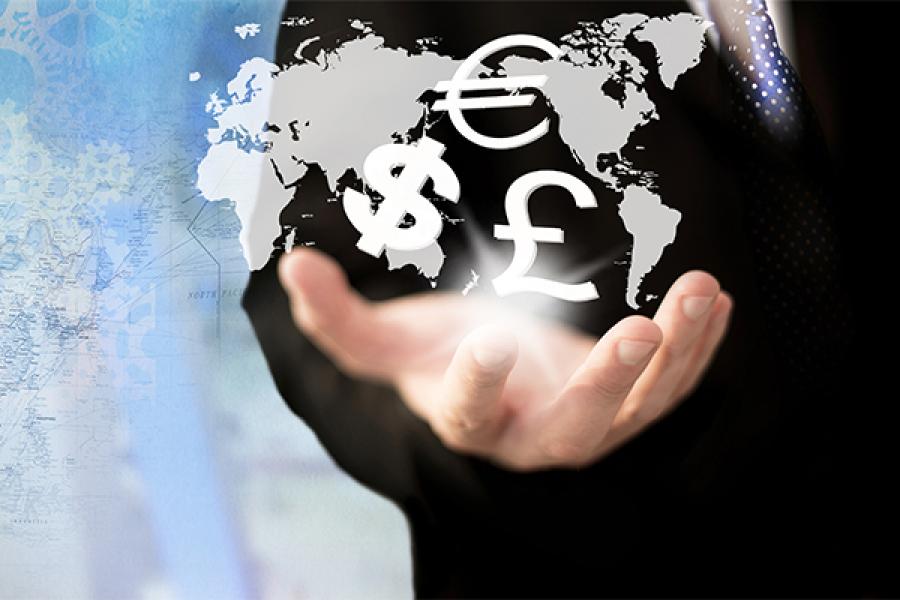 Image: Shutterstock
A key ingredient in venture investing is the valuation of the investment opportunity

A man is known by the company he keeps. It is an old saying, and pardon me, the gender is only incidental. Today a company, particularly, is known by the investor it has. Several studies have shown the value addition provided by early stage venture investors in the startups they invest in. There are also differences between investors—the extent of value addition made by top quartile investors is perceived to be higher. Therefore, the entrepreneurs and venture founders flock to the top investors and are keen to obtain investment from them. As capital providers, venture investors face the problem of plenty as they receive investment proposals by the hundreds, while they can invest in just a handful.

A key ingredient in venture investing is the valuation of the investment opportunity. While investors may not decide on a deal based on valuation, they could often pass an investment opportunity when the founders and the investors do not see eye to eye on the expected valuation. A deal is attractive only at a particular price point. In order to get a peep into the mind of the VC’s valuation process, we did a survey of VCs on the important factors that they look at, in an investment proposal. The main results follow below.

The Survey Respondents
The respondents of the survey were carefully chosen so that we had a sample that includes investors who invest in different stages of the company lifecycle—angel investors, seed and early stage investors and growth and late stage investors. Overall, we had obtained 45 responses which were used for the analysis.

Out of all respondents, 44 percent were independent venture capital investors, 24 percent were angel investors and the remaining 32 percent were part of either an Indian or global institutional network. 36 percent of the respondents have been investing in India for less than five years while an equal percentage have been around for more than ten years, with the remaining respondents investing somewhere between 5-10 years. Out of the total respondents, only 33 percent had raised their capital from India, while 36 percent relied completely for funds from abroad. Our sample had more representation from smaller VC firms—56 percent of the sample was investors who preferred investing an amount of less than $5 million, 28 percent preferred investing between $5-25 million and only 17 percent preferred investing beyond $25 million. 33 percent of the respondents had invested between 10-20 companies, while 31 percent had less than 10 companies in their portfolio. The remaining 36 percent had more than 20 companies in their portfolio. 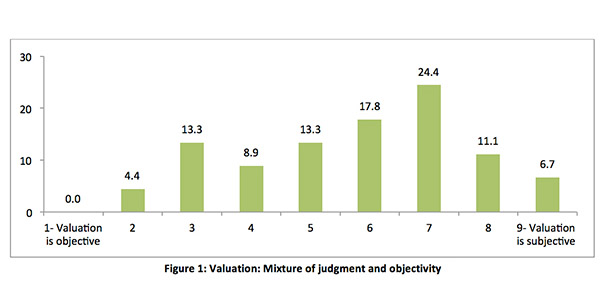 Influencing factors in the valuation
Figure 2 shows the rating provided by the VCs for the various factors that influence the valuation process. Results indicated that the perception of value add by investors, other similar deals happening in the market, and simultaneous interest from other competing investors played a key role in determining the value of investment opportunities across all the stages. This finding indicates the somewhat ‘herd’ mentality of investors, where they follow their peers in terms of investing in a particular sector/company. Entrepreneurs can leverage this finding on their behalf, by founding companies that are in the ‘hot sectors’ such as healthcare and information technology. Also, they can definitely increase their valuation if they can attract the interests of multiple investors. We can see that the ranking of the influencers does not significantly change across different stages of the lifecycle, though there are minor variations. For example, the role of intermediaries receives a higher emphasis across the growth and late stage. This is because, at a later stage, VCs employ investment bankers to scout for deals. The valuation of the company could be influenced by the reputation of the intermediary as well. 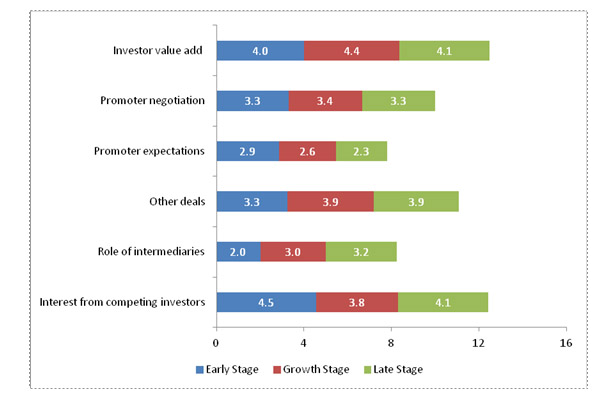 Drivers of valuation
We requested the respondents to rate various factors in terms of their importance in arriving at the valuation of the investment opportunity. Figure 3 shows the results. Results by lifecycle stage indicated that across all the stages the founders and management team played a key role in determining the value of investment opportunities. In the initial stages, the founder may be the sole anchor of the company, but as the venture matures, a competent management team is essential to take the venture to the next level. We can also find that the ranking of the factors does not significantly change across different stages of the lifecycle, though there are minor variations. For example, business model has a higher rank in early stage as compared to that at late stage. In late stage investments, firms would have to build several competitive advantages and cannot sustain by business model innovations alone. Clarity in exit route has a higher rating in late stage investing as compared to that of early stage. This is again natural, since it would be difficult for startups to chart out the exit path for the investors in the initial phases. On the other hand, investors in late stage would prefer to see a clear exit path to generate the returns. 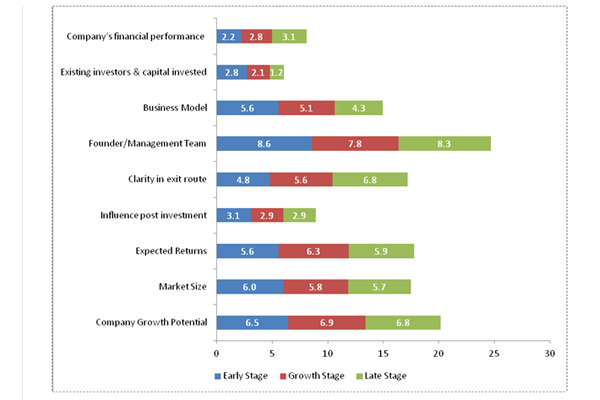 Tools used for valuation
We sought information from the respondents on the different tools that they use in the valuation process. Some are based on cash flows from the business, whereas some are based on price (of other similar companies). Since the valuation process differs by the lifecycle of the investee company, we collected responses separately for investments in startup and early stage, growth stage, and late stage companies. The results (in percentage) are given in Figure 4. 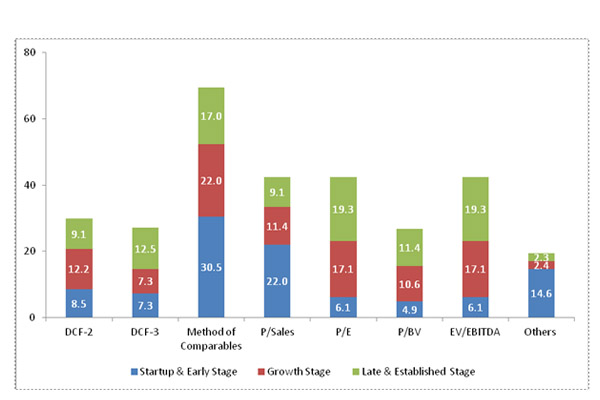 It was seen that pricing based approaches dominated investments across all stages. The number of responses for cash flow based approaches (such as DCF-2 and DCF-3) were very small. DCF approaches, considered as a very robust valuation technique in text books, is rarely used in practice. This could be probably due to the difficulties involved in estimating cash flows. Pricing-based approaches can be classified into two: Based on comparable companies and based on performance. In startup and early stage companies, valuations seem to be largely based on comparable companies (comparable method had the highest frequency of 30 percent) and to a certain extent on sales performance (Price–sales ratio had the second highest frequency of 22 percent) as compared to other approaches. 15 percent also indicated it’s too early to use any sort of valuation technique and they rely on no specific framework for early stage investments. Each investment is done on a case-to-case basis and the final valuation number is a result of their negotiation with the founders. This is probably because in the early stage, there is not much information (financial and otherwise) which can help decide the valuation.

While pricing metrics play an important role in valuation in the late stage as well, the metrics used changes. Rather than top line performance (sales), bottom line performance dominates the valuation approach. Price/earnings ratio as well as Enterprise Value – EBITDA ratio are more frequently used. This is natural because, as the company grows, the earnings track record gradually emerges, and investors prefer to use them as valuation drivers. The metrics used during the growth stage fall between the early and late stages—investors gradually seem to move away from using sales as a value driver to earnings and EBITDA as value drivers. For entrepreneurs, this has important implications. While they might be successful in the early stages to raise capital with revenue run rate, a strong earnings performance would be needed to raise capital during growth and late stages.

Summary
What we found in our study was this. The mixture of ingredients in the valuation recipe has been by and large the same across investors. But the subtlety was noticed in the proportion of the ingredients. They varied between investors and investments, sometimes marginally, but sometimes a little more so, to create different flavours. Like a connoisseur who is able to distinguish very closely related flavours, entrepreneurs should be able to understand the finer differences that characterise different investors or investments in different lifecycle stages and prepare themselves accordingly during the fund raising process.

[This article has been reproduced with permission from Indian Institute of Technology, Madras]

Tweets by @forbes_india
Film allows one to hold up a mirror to society: Mira Nair
India's craft beer Bira 91 is frothing over