Business leaders call for the skill to constantly evolve, both in terms of strategies and leadership in a challenging environment 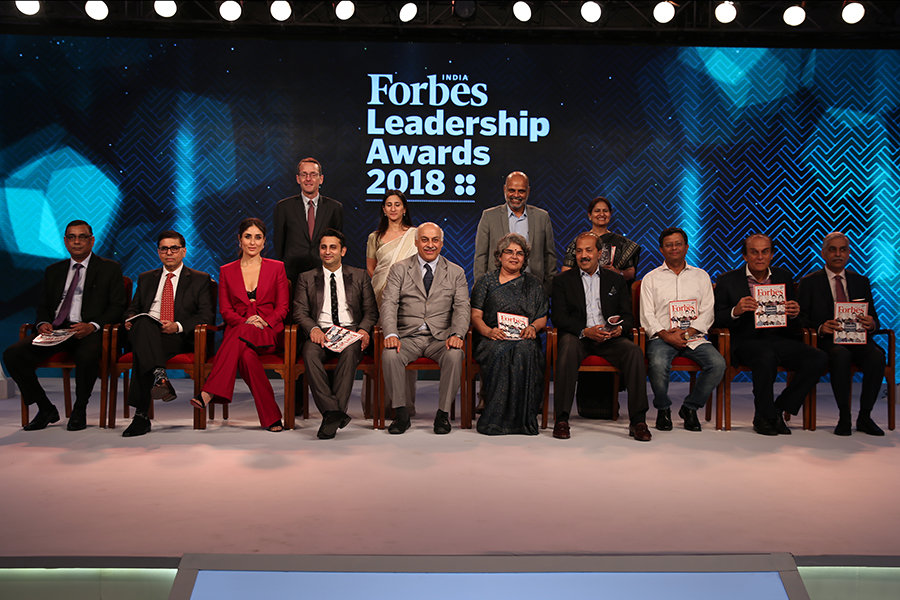 It isn't every day that India’s business doyens -- at a packed awards ceremony -- decide to give a standing ovation to three teenagers, one of them aged just 13, in recognition of their entrepreneurial skills.

That was one of the highlights of the 8th Forbes India Leadership Awards held at the Trident in Mumbai on November 22. At the gathering attended by some of India’s well known business icons, Harshwardhansinh Zala, the 15-year-old founder of Aerobotics7 Tech Solutions, who develops drones to detect and detonate landmines; 13-year-old Tilak Mehta, who drives a logistics company Papers N Parcels and Rifath Shaarook, the chief technology officer at Space Kids – whose helped developed the world’s lightest satellite -- took center stage and delved into their journey into the world of entrepreneurship.

The trio, engaged in a discussion with serial entrepreneur Ronnie Screwvala – also a jury member for the Forbes India Leadership Awards – to discuss how they balance work with studies and how they hired seniors to become boss to employees much older to them.

Tech Tycoon Azim Premji won the lifetime achievement award for his continued efforts at transforming what was once a vegetable oil company into an IT behemoth, and eventually into building a well-respected philanthropic effort through the Azim Premji Foundation which he set up in 2001.

The evening kicked off with the outstanding startup of the year, which saw among others companies such as Swiggy and Oyo being nominated, with the award going to Gurgaon based Power2SME for building a comprehensive B2B business using the small and medium enterprises in India, and navigating the business even as demonetisation hit the economy. Power2SME is looking to target revenues of Rs 1,000 crore in the next year.

Adar Poonawala, CEO of Serum Institute of India won the GenNext entrepreneur of the year award. “The freedom that my father gave me 8 years ago to take over as CEO was unique, and fortunately for me, I was the only child,” Poonawala said. “What I envisaged 8 years ago, was to build capacity ahead of demand, and that’s why we took the number one spot in terms of volume in terms of vaccines, and now we don’t know where we will go in five years’ time. Only time will tell.”

One of the highlights of the evening was the Oxford Union-style debate between Crisil’s CEO Ashu Suyash and Morgan Stanley India’s managing director Ridham Desai, who debated over India’s ability to attain double-digit growth by 2021. While the audience was positive over growth prospects prior to Desai’s speech, Suyash managed to swing the audience to her favour, highlighting concerns such as unpredictable global economic growth which could impact India's pace of growth going ahead.

The other awardees of the function included Rajeev Jain, for being the best CEO in the private sector. Much of that has been due to Bajaj Finance’s staggering growth as a non-bank over the past few years. Jain downplayed fears that investors might have over headwinds which the NBFC sector is facing due to a liquidity crunch. “These are transitional periods, and they will pass,” Jain said. “Good companies will do better, and mediocre companies not so well, and that’s how the cycle will continue.”

Sanjiv Mehta, the chairman and MD of Hindustan Unilever won the best CEO for a multinational company, for helping HUL maintain their dominance in the Indian FMCG industry for long.

New Delhi based Energy Efficiency Services Limited won the award for the best public sector company. From operational revenues of Rs3 crore in 2013, EESL now expects revenues of over Rs 2500 crore in 2019, with profits of Rs 100 crore. The company is now pursuing a plan to install smart electric meters to improve billing efficiency among others.

Motherson Sumi’s chairman and co-founder Vivek Chaand Sehgal won the much-coveted entrepreneur of the year award. The Indian-born Australian billionaire has been instrumental in driving Motherson Sumi to become the world’s 23rd largest auto parts company, led by over 20 acquisitions over the past 15 years. The company continues to transform strategies in a constantly evolving global economic and trade climate and as the electric vehicle play draws closer.

Gayatri Vasudevan won the Entrepreneur with a social impact, the founder of LabourNet, which provides jobs to India’s informal sector workforce. So far, it claims to have trained over 7 lakh people and aims to impact over 10 million lives by 2022.

The awards ceremony ended with a freewheeling chat which Network18’s Entertainment Editor Rajeev Masand had with Bollywood actress Kareena Kapoor Khan, on how she has juggled between a successful career and motherhood. Kapoor Khan advised young actresses to acquire the ability to evolve and grow constantly, if they had to stay successful at the top of their game.

Tweets by @forbesindia
FILA 2018: Kareena Kapoor Khan is 'Icon of Cinema'
Perennial: Out of limbo