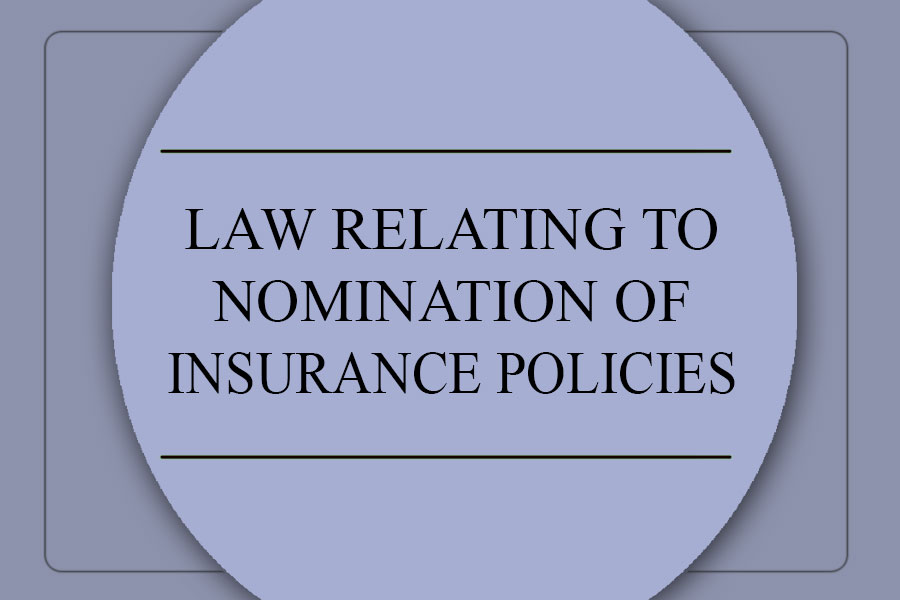 We have often heard that it is beneficial to nominate someone in your financial assets, primarily in order to secure the next of kin or the ones otherwise dependent on you. Nomination is also commonly seen as a method to transfer financial assets without having to necessarily involve lengthy legal procedures.

The lack of any uniform practice and procedures where nomination is concerned often leads to prolonged processes and sometimes adversarial litigation for staking rightful claim.

Law relating to nomination of insurance policies - prior to 2015 amendment

(6) Where the nominee or, if there are more nominees than one, a nominee or nominees survive the person whose life is insured, the amount secured by the policy shall be payable to such survivor or survivors.

Pursuant to the above provision, it was common notion that the nominee should be entitled to the proceeds of the insurance policy on maturity to the exclusion of all others, such as legal heirs of the policy holder. This was taken to be the correct position especially when the nominees are immediate family members such as parents, spouse or children.

In fact, in keeping with this notion, the Law Commission of India (“Law Commission”) in its 82nd Report which was released in January 1980, proposed changes to the provisions of Section 39 of the Insurance Act. It was recommended that provisions of Section 39 be amended to state that the nominee, if he survives the insured as on the date of maturity of the policy and if he is a parent, spouse or child of the insured, he should be ‘beneficially entitled’ to the amount secured under the policy . The rationale for the proposed change was that this would carry out the real intent of the parties, it would also be desirable from a social justice perspective and that it was similar to the amendments made by the legislature for laws dealing with provident funds .

Despite the recommendations of the Law Commission in its 82nd Report, no changes were made to the statutory provisions under Section 39 of the Insurance Act. This meant that original language of the section which did not use the words ‘beneficially entitled’ continued on the statute books. This also led to a diversion of opinion amongst High Courts regarding the true interpretation of Section 39(6) and whether the nominee was indeed a beneficial owner or merely a custodian of the insurance proceeds.

The controversy was put to rest by the Hon'ble Supreme Court of India (“Supreme Court”) in the case of Sarbati Devi vs. Usha Devi  when it settled the legal position by stating that a mere nomination under Section 39 of the Insurance Act does not have the effect of conferring on the nominee, any beneficial interest in the amount payable under the life insurance policy on the death of the assured and the nomination only indicates the hand which is authorised to receive the amount. The Supreme Court also held that nomination does not intend to act as a third mode of succession, to the existing 2 modes i.e., testamentary and intestate.

This to an extent established a quietus on the debate regarding the rights of a nominee over an insurance policy, especially in light of the fact that the changes proposed by the Law Commission in its 82nd Report were not carried into effect.

Subsequently, with a view to carry out a substantial review of the Insurance Act as well as The Insurance Regulatory and Development Authority Act, 1999, the Law Commission prepared a consultation paper  in June 2003 and discussed the same with various stake holders comprising of public and private sector insurance companies, consumer organisations and a wide range of experts in the field of law and insurance. The consultation paper and the responses received thereto led to the preparation of 190th Report of the Law Commission.

Pursuant to the recommendations made by the Law Commission in its 190th Report, the provisions of Section 39 of the Insurance Act were amended  with effect from 26 December 2014 (“2015 Amendment”) to specifically provide that in the case of nomination, where the holder of the policy nominates parents, spouse, children or any of them, the nominees are beneficially entitled to the amount payable unless it is proved that the holder of the policy i.e., the insured could not have conferred a beneficial title. While the first part of the recommendations of the Law Commission were accepted and provisions of Section 39 were amended to provide for the above, the distinction between ‘beneficiary nominee’ and ‘collector nominee’ which was also a part of the recommendations by the Law Commission were not a part of the amendments.

While the amendments to the provisions of Section 39 of the Insurance Act were laudatory, the exclusion of the Law Commission recommendations which provide for a specific distinction between ‘beneficiary nominee’ and ‘collector nominee’ has added some degree of confusion to the beneficial entitlement of a nominee where the nominee(s) is the parent, spouse or child. Perhaps it could still be argued that the legislature deliberately did not provide for this definition as it never meant that the words “beneficially entitled” were meant to mean that the nominee such as parents/ spouse/ spouse and children should take in exclusion to the other legal heirs. In simpler terms, where the nominee is either a spouse or a parent, it could be argued that one of them cannot take to the exclusion of the other, as both could be considered as legal heir of the policy holder.

Judicial decisions relating to the 2015 amendment

The Rajasthan High Court in the case of Ramgopal and Ors vs. General Public  was dealing with an appeal from a rejection of an application for succession certificate under Section 372 of the Indian Succession Act, 1925. In the appeal, reliance was placed on the provisions of the Insurance Act as amended by the Insurance Laws (Amendment) Act 2015 to contend that the nominee, being the wife of the policy holder was beneficially entitled to the proceeds from the insurance policy. However, the Rajasthan High Court rejected the contention holding that the policy matured on the death of the holder and since the holder died on 14 December 2013 i.e., prior to the coming into force of the Insurance Laws (Amendment) Act 2015, the amended provisions did not apply.

Subsequently, an opportunity to consider the question regarding the true purport of the amendments to Section 39 of the Insurance Act came up before the Delhi High Court in the case of Shweta Huria vs. Santosh Huria . In Shweta Huria, the Delhi High Court was considering an appeal filed by the daughter-in-law against the preliminary decree passed by the trial court. The preliminary decree was passed in favour of her mother-in-law. The mother-in-law interalia claimed that she was entitled to the proceeds of the insurance policy taken by her son in accordance with the rules governing intestate succession as applicable to the deceased son. The wife i.e. the daughter-in-law claimed that she was the nominee under the insurance policies and pursuant to the amendment to the Insurance Act in 2015, she was beneficially entitled to the insurance proceeds. Reliance was also placed on Sarbati Devi vs. Usha Devi  by the mother-in-law. Though the Delhi High Court did take note of the amendments to the Insurance Act in 2015 and the distinction that had been carved out between a beneficiary nominee and collector nominee, it relegated the matter back to the trial court to be considered afresh since the trial court had not considered the arguments concerning amendments to the Insurance Act. The issue thus remained inconclusive as far as the Delhi High Court was concerned.

Given that there is no clear judicial ruling on the beneficial entitlement of the nominees, as a result of the amendment to Section 39 of the Insurance Act, it remains to be seen if the true purport of the amendment will be eventually upheld. It is necessary to point out that despite the recommendations of the Law Commission as part of its 190th Report, to carve out a distinction between ‘beneficiary nominee’ and ‘collector nominee’; the legislature did not frame these recommendations as part of the amending statute. Therefore, whether there was a deliberate attempt to exclude the nominees from getting beneficial entitlement to the insurance proceeds, remains to be seen. Further when the term parents, spouse and children are used together in the amended provisions of Section 39, it will truly be a test of social justice for the courts to rule in favour of one set of legal heirs as opposed to the other. Another aspect which will also have to be considered by the courts is, do the amendments to the provisions of Section 39 provide for a third mode of succession (as coined famously by the Supreme Court in Sarbati Devi ) since it includes the term, ‘parents’ as a species of nominee(s). This will require consideration when the nominee is the ‘father’ of the policy holder, who would otherwise be categorised as Class II legal heir in the case of intestate succession under the provisions of Hindu Succession Act, 1956 .

It would therefore be very interesting to see in the times to come, how this issue is conclusively settled by the Supreme Court or a further amendment is made to the Insurance Act to incorporate the left-over recommendations of the Law Commission.