'On the backfoot' by Chirag Madan 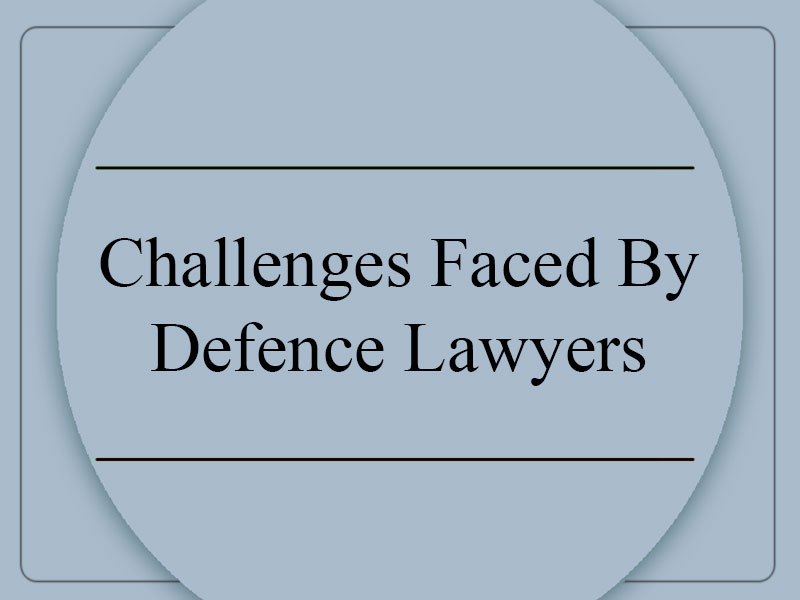 Since the era of the barons in England, the legal profession and legal education have come a long way. Lawyers, usually classified in the common law system as advocates, solicitors and barristers, face a host of challenges in the profession. Amongst the umpteen number of challenges which lawyers face, the one that stands out the most  is not just their specialization in a particular field but their super-specialization, that has become imperative for their survival as professionals. However, the crucial element to achieving  specialization is to have a strong rudimentary understanding of the law and how it works in the real world.

After practising on the criminal side for almost a decade, I have witnessed and fairly understood the systematic functioning of our criminal justice system.  The defence side is the most challenging one, where the defence lawyer lays down the basic foundation of the case’s defence and the strategy which is to be adopted at the appellate stage, where need be. The defence strategy  adopted by a lawyer at the trial stage becomes a bedrock which cannot be flustered with and therefore the job of a defence counsel is the most crucial while determining the path towards obtaining relief for the client.

The working of the legal profession and court proceedings, in particular, are substantially different from how they are portrayed in movies or television shows which are mostly far from reality. The life of a defence lawyer is way more tiring, time consuming and mostly aggressive (rather than defensive). Being a defence lawyer is a twenty four hour job and we are always on our toes.

Although there is potential for higher pay and considerable job autonomy, defence lawyers face a number of challenges in their roles, including negative public perceptions, demanding clients, lack of proper instructions, uncooperative prosecution,  overwhelming evidence records, high expectation of clients, anxiety of the family members of the clients, impractical timelines, professional commitments, etc. With the advancement of technology, insurmountable  amounts of information has been made easily accessible to everyone, which poses a new challenge for the defence lawyers in dealing with their clients and the public at large.

The first few years in litigation, particularly as a budding defence lawyer, are often time consuming and involve less remuneration which becomes a concern for many young lawyers who contemplate shifting their area of practice to the corporate sector. While the corporate sector/law firms do provide good salary packages to fresh graduates, the work often gets monotonous and involves less to minimal client interaction. All this, of course, is subject to the setup or firm one is in. In criminal litigation, on the other hand, one has to dedicate her/himself to understanding and learning the procedure in the formative years without expecting an attractive pay cheque or returns whatsoever.

Every line of work demands some sacrifice but in a defence lawyer’s life most of his time is spent doing work and one’s relationship with family and friends often suffers. The workload coupled with extensive hours makes forming and maintaining relationships quite cumbersome. Be it a trial strategy, a bail or a cross-examination, one has to put long hours for preparing the same. If one doesn’t totally dedicate her/himself in this tangent of the profession then this not the right career path.

Due to the widespread access to social media and new media,  the public at large often have a wrong perception about lawyers practising on the criminal side. The public, after viewing any article or news piece about a matter, may question the lawyer, his client and his ethics or morals – without being sure of the veracity of the message, which is further circulated causing irreparable damage. People forget that an accused is innocent unless proven guilty and the Advocates Act, 1961 casts a duty upon the Advocate to defend a person whether in his opinion he is guilty or not.

A lawyer deals with numerous people but in this profession one has to keep himself/herself apart from their clients emotionally. No matter how stressed a defence lawyer is, emotions should not reflect on one’s professionalism and the quality of work must not be compromised. When clients lie or withhold information from their lawyer, they harm no one but themselves. Additionally, some clients commit crimes that are symptomatic of a deeper problem, such as lack of parental oversight, personal accountability or regard for people. One must not forget that ignorance of law is no defence. Ignorantia juris non excusat. Clients may sometimes also have demands and expectations from their defence attorney that are unrealistic given the facts of the case. At the start of a criminal case, the clients often change lawyers for quick relief which is disheartening.

Defence lawyers may also experience ethical and moral dilemmas. They may experience a burnout if they consistently find themselves preparing for court at the last minute and staying up late to research. This accentuation is usually compounded when new evidence is presented. Lawyers  may spend hours in the evening after a day in court researching and preparing notes for the next day. If an innocent client is railroaded and found guilty, it not only impacts the lives of the client and his family and the reputation of the attorney representing them as well.

A defence lawyer may often deal with defending an accused having a relatively different background, association or belonging from a different community. There are instances which may pose a threat to his life. Often, when a lawyer is unable to secure a desired result for his client, such accused or their associates may cause harm or attack the lawyer. Depending on the threat level, prominent lawyers handling high profile matters are often given security by the local /state police.

Though there may be some downsides to practising as a defence lawyer as briefly explained above, there are no shortcuts to success and one needs to burn the midnight oil to see the shining light on the brighter side of this profession. At the end of the day you know that you are responsible for one’s personal liberty, rights, liabilities etc, therefore, one should  be focussed and work hard. I am certain that success may be delayed but it would not be denied.


The author is a defence lawyer based in Delhi and is the Founding partner of MS Law Chambers.