Shares in IAG, the airline's parent company, dropped about 3 percent on Monday before ending trading down 1.7 percent 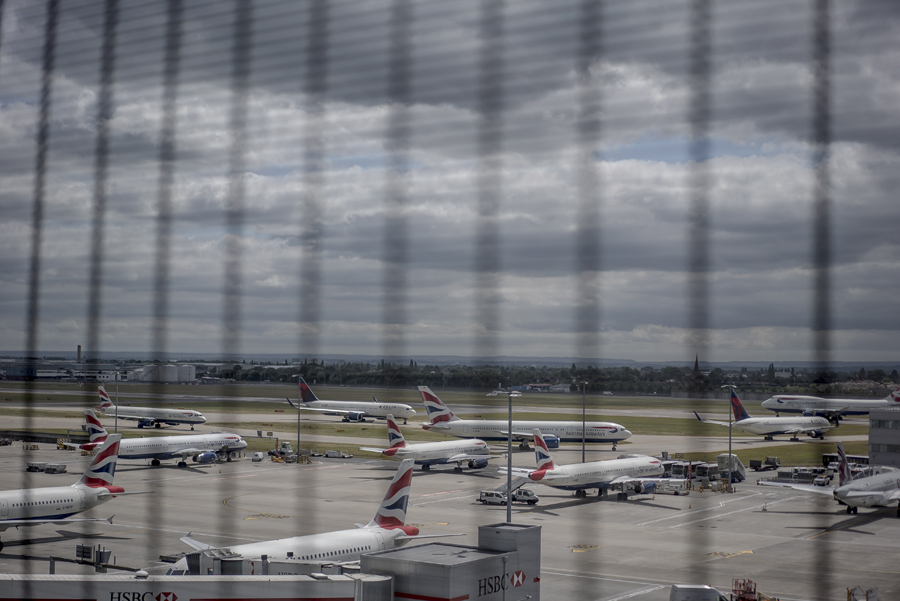 FILE-- British Airways planes line up to use the runway around Terminal 5 at Heathrow Airport in London, July 12, 2017. British Airways canceled most flights scheduled for Monday and Tuesday after its pilots went on strike over their demand for higher pay, upending the travel plans of about 195,000 passengers. (Andrew Testa/The New York Times)


British Airways canceled most flights scheduled for Monday and Tuesday after its pilots went on strike over their demand for higher pay, upending the travel plans of about 195,000 passengers.

The pilots’ union said its members would not return to work for 48 hours after starting the job action at midnight Monday, prompting the latest of several cancellations that British Airways has had to manage in recent months amid a simmering labor standoff.

Terminal 5 at Heathrow in London, a British Airways hub, was deserted Monday, according to British media reports, a sign that the airline had prepared for the possibility of a walkout. British Airlines said it had contacted customers two weeks ago to offer a choice of alternative flights on British Airways planes or with different airlines, or full refunds.

“After many months of trying to resolve the pay dispute, we are extremely sorry that it has come to this,” British Airways said in an emailed statement Monday.

The airline said it had canceled 1,700 flights that had been scheduled for Monday and Tuesday because of the strike, the first ever for British Airways pilots.

“Unfortunately, with no detail from B.A.L.P.A. on which pilots would strike, we had no way of predicting how many would come to work or which aircraft they are qualified to fly, so we had no option but to cancel nearly 100 percent of our flights,” the airline added, referring to the British Airline Pilots’ Association.

British Airways had offered to raise its pilots’ pay 11.5% over three years, a proposal that pilots who belong to two other unions had accepted. The average captain earns about 167,000 pounds ($205,000) a year in base pay, and the proposed raises would eventually take them to more than 200,000 pounds a year, including other unspecified payments and allowances, according to the airline.

Most of the carrier’s 3,900 pilots belong to the British Airline Pilots Association, which said that its members have had to take pay cuts and that British Airways has declined to entertain counteroffers.

They have argued for a share of the company’s profits, which in 2018 increased 11.6% from the year before, to 2 billion pounds.

“They’ve previously taken big pay cuts to help the company through hard times,” Brian Strutton, the union’s general secretary, said in a statement. “The company’s leaders, who themselves are paid huge salaries and have generous benefits packages, won’t listen, are refusing to negotiate and are putting profits before the needs of passengers and staff,” he added.

The two sides have been negotiating since November, and the dispute has already led to frustration among customers.

In August, British Airways emailed passengers to tell them that flights would be canceled because of a planned pilot strike. The airline then contacted passengers hours later to say it had made a mistake with regard to when the strike would affect flights.

The admission came too late for many passengers who had already made alternative plans. Many expressed outrage over what they felt was the inadequate support they had gotten from customer service representatives for the airline.

The pilots’ union has voted to strike again Sep. 27 if the dispute has not been resolved by then.

Interviewed by Sky News on Monday, Alex Cruz, the airline’s chief executive, said the pilots had acted against their own interests by deciding to strike, although he admitted that the walkout was “punishing our brand.”

Investors took note. Shares in IAG, the airline’s parent company, dropped about 3% on Monday before ending trading down 1.7%.

The reputational problems may not last, said Andrew Charlton, managing director at consulting firm Aviation Advocacy. Customers who complain about problems now might be won over by the airline later, he said. Price cuts could be one remedy, Charlton said. British Airways, which is considered a higher-end national carrier, has increasingly sought to compete with budget airlines that have grabbed a larger share of the European aviation market.

“To the extent the brand has been tarnished, it can be polished back up by offering cheap tickets,” he said. “I don’t think the worries are huge.”