China now faces the difficult task of figuring out which of these companies it will allow failing. The central government in Beijing keeps a tight grip on the Chinese financial system and often rescues companies to preserve jobs 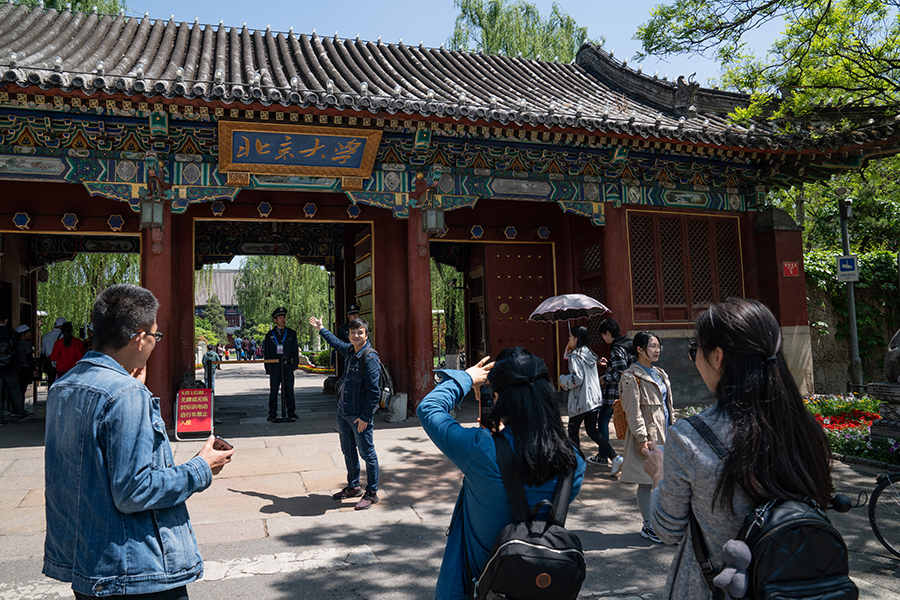 Tourists at the gate to Peking University, one of China's best and oldest universities, in Beijing, April 26, 2019. A conglomerate backed by Peking University is the latest to join a long list of Chinese businesses that have run short of cash when it was time to pay back their debts. (Yan Cong/The New York Times)

HONG KONG — China’s companies racked up some towering bills as they expanded, and the world’s investors and lenders rushed to offer them even more money.

Now the bills are coming due and a growing number of Chinese companies cannot pay up, in a sign that the world’s No. 2 economy is feeling the stress from its worst slowdown in nearly three decades.

Two high-profile companies — a giant government-run trading firm and a conglomerate backed by China’s most distinguished university — are the latest to join a long list of Chinese businesses that have run short of cash when it was time to pay back their debts. Chinese corporate borrowers have defaulted on nearly $20 billion in loans this year.

The amount is small compared with China’s overall economy, but the toll is rising. Chinese companies owe hundreds of billions of dollars in debt that is coming due over the next two years, including more than $200 billion owed to lenders and investors around the globe.

China now faces the difficult task of figuring out which of these companies it will allow to fail. The central government in Beijing keeps a tight grip on the Chinese financial system and often rescues companies to preserve jobs. But Beijing has shown a greater willingness to let companies go insolvent to teach them a lesson about borrowing too much and many local governments now lack the funds to help their hometown champions.

“Once the government acknowledges the problem is large enough, then it has to start making careful decisions about where to intervene,” said Logan Wright, director of China research at Rhodium Group, a consulting firm.

Once rare, defaults in China are rising. The value of loans on which Chinese companies have defaulted has surpassed the total for 2018.

“This is not over yet,” said Christopher Lee, a China credit specialist at S&P Global. “We are expecting defaults to rise. There are many other companies that are operating in a very difficult environment.”

Last week, a company called Peking University Founder Group skipped a $284 million bond payment. That was widely noticed in China because the company’s majority shareholder is the financial arm of Peking University, one of the country’s best and oldest universities.

Founder Group, which has investments in securities trading, semiconductors and real estate, cited tightening liquidity and said it was “actively seeking funding” to pay back bondholders.

The week before Founder Group’s announcement, a major Chinese commodities trading firm, Tewoo Group, became the first state-backed company to miss a payment to foreign investors in two decades. Tewoo, which is controlled by the government of the Chinese city of Tianjin, is on the hook for $1.25 billion in debt to foreign lenders.

“It’s quite a hairy situation,” Lee said. “Many investors expected Tewoo would at least pay off its offshore debt.”

Citing the Tianjin government, which has its own debt problems, Lee added that “the state just doesn’t have the ability to support it anymore.”

Tewoo and Founder Group did not respond to requests for comment.

The bond market turmoil is only one of a number of tremors in China’s financial system, which is struggling under the weight of an enormous borrowing spree. A decade ago, when the global financial crisis threatened world growth, China began a giant stimulus push to build roads and bridges and create jobs. To fund it, banks lent heavily and local governments began raising money.

The push resulted in the largest credit expansion by any single country, in terms of the size of its economy. The banking system more than quadrupled in size, from $9 trillion at the end of 2008 to $40 trillion today.

While most of the lending comes from banks, Chinese borrowers have increasingly turned to the bond market to get money they need to run their businesses. Now the bill is coming due.

According to S&P Global, Chinese companies must pay back $90 billion in debt denominated in American dollars, meaning the lenders are global companies and investors outside China. In 2021, an additional $110 billion will come due.

China keeps a firm hand on the financial system and has the ability to throw money at problems that emerge, lessening the chances of a shocking financial crash. Still, the troubles could add up if bond defaults continue to grow, investors and banks grow leery and companies can no longer get the cash they need to keep the lights on.

“You see one or two go and then, if you’re an investor, you’re more concerned about your bond being repaid,” said Andrew Polk, the founder of Trivium, a consulting firm in Beijing.

“Previously you could roll over the bond repayment,” he said, “but when uncertainty is heightened, then people are less willing to give you leeway.”