Make the most of Taiwan's capital by making food—, and some history, a priority 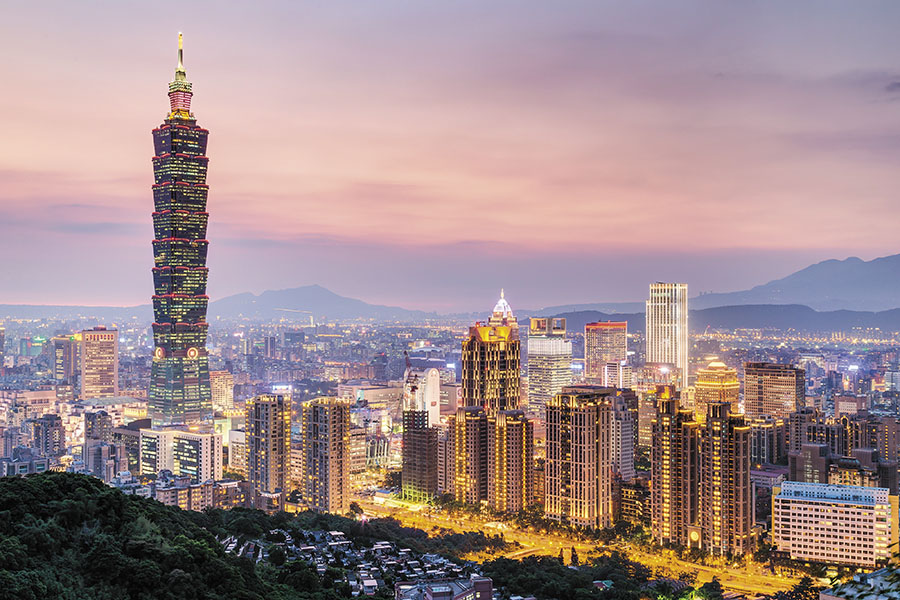 Amadeustx / Shutterstock.com
A bird’s eye view of Taipei city
Every time I mentioned my Taipei vacation plan to anyone in Singapore or Hong Kong, the first response was always, ‘Oh! It’s great for food!’ This would inspire two thoughts: One, ‘Fantastic, that’s what I want all my holidays to have as a tagline’. And two, ‘Why haven’t I been there before?’

Having spent over a decade in this neighbourhood, my wife Priya and I somehow missed putting Taipei on our travel map. This is an oversight we are glad we corrected as the Taiwanese capital offers a fix of top-notch Chinese food, some gracious people, and an easing from the frenetic pace of the mainland China megalopolis, allowing you to stop and smell the dumplings.

9 am
Start your day with a gua bao, or the Taiwanese version of the pork belly bun. It contains a slightly sweeter version of the Chinese braised pork belly in a pillowy white wheat bun, garnished with peanut powder and mustard greens for texture and a stalk of coriander for a fresh finish. Ask your arteries to relax, you can feed them bran some other time. We visited a small gua bao shop close to the Xinyi Anhe Station, but this is a neighbourhood thing, so ask your concierge or host for a good joint close to where you stay—there are plenty in the city. 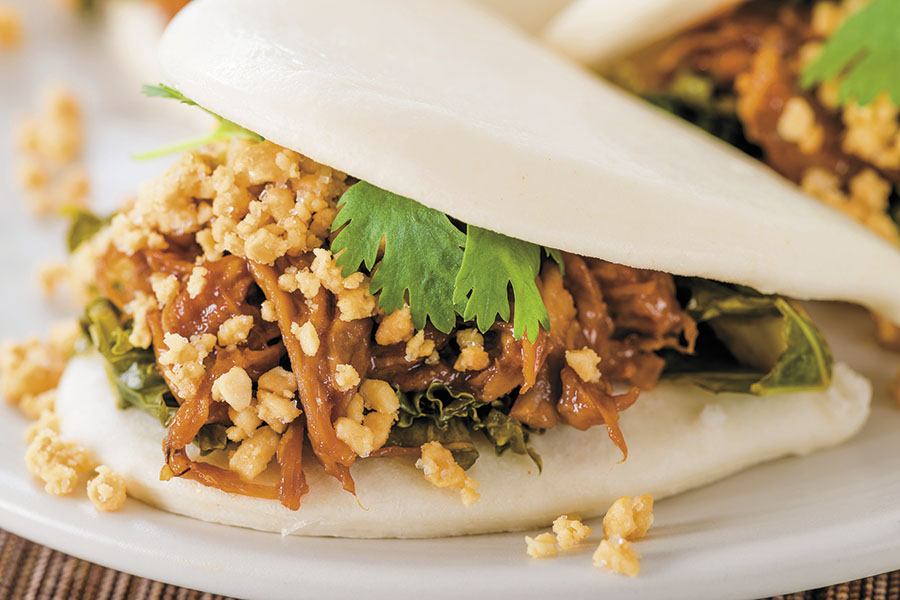 Gua bao, or the Taiwanese version of the pork belly bun, is a popular snack and can be enjoyed at many joints in the city
Image: Paul Brighton / Shutterstock.com

With that porcine goodness flowing through your veins, begin your sight-seeing, and cover a wide arc of Taipei’s history through a whistle-stop tour of a few neighbourhoods. Start at Longshan Temple that was built in 1738 by the first Chinese traders who arrived here. The temple is a beautiful structure with sweeping eaves, colourful and intricate figures on the roofs and the combination of worshipping crowds and quiet that I have found unique to Chinese temples. Next, head to Dihua Street that got its big break when tea merchants came to this area and built shops and mansions after Taiwan’s ports were opened up post the Opium Wars of the 1850s. The street has a wonderful mix of old retail with traditional Chinese medicine and tea merchants (stock up on floral tea buds and Chinese tea varietals you never knew existed), as well as some trendy new boutiques.

Time for the 20th century now, so head to Zhongzheng District for a glimpse of the architecture, wide boulevards and the imprint on the city from its early 20th century Japanese rule. The Zhongshan Hall (which originally functioned as the city hall), Presidential Office Building and the 228 Peace Memorial Park are my top picks. 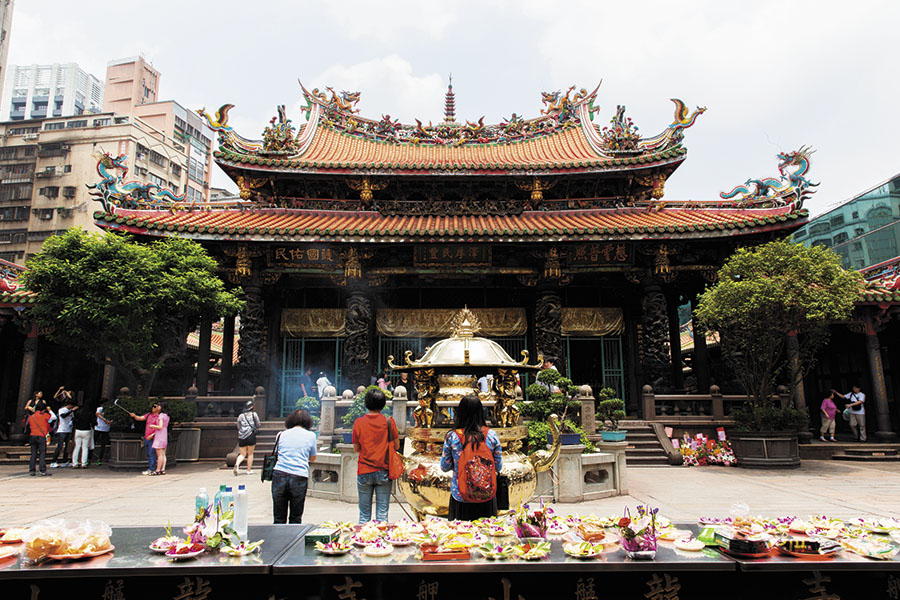 Longshan Temple, built in 1738 by the first Chinese traders who arrived in Taiwan, is a beautiful structure with sweeping eaves and intricate figures on its roofs
Image: 2p2play/ Shutterstock.com

If these wanderings put you in the mood for a cold beer or a crisp glass of wine, visit the Huashan 1914 Creative Park that has taken a leaf from urban industrial redevelopment efforts of many Western cities and got it right. This old wine factory has been refashioned into a chic retail and F&B venue with boutiques featuring local designers, and relaxing cafes and wine bars for a refuelling stop.

Noon
It is soon time to renew the research on whether all the tall tales around food in Taipei are true. Make the Da’an District your crucible for this noble experiment. You can head to the mother ship of fantastic, affordable, Michelin-star-feted Chinese food: The Din Tai Fung restaurant, with its first-ever branch on Xinyi Road. Or if, like us, you are inevitably faced with throngs of people and prefer not to wait close to an hour, walk a few metres down to Yong Kang Beef Noodles. This local landmark has stood the test of time for north of five decades in the very discerning market for Taiwan’s signature braised beef noodles. If your diet allows it, order a steaming bowl of said noodle goodness, and you’ll see why the shop is named after that dish. But even if you don’t eat beef, there are some great appetisers: I recommend the Sichuan dumplings—fresh, braised greens with a hint of sesame oil—and their other signature dish—chopped pork ribs, first coated with a special rice and then steamed. 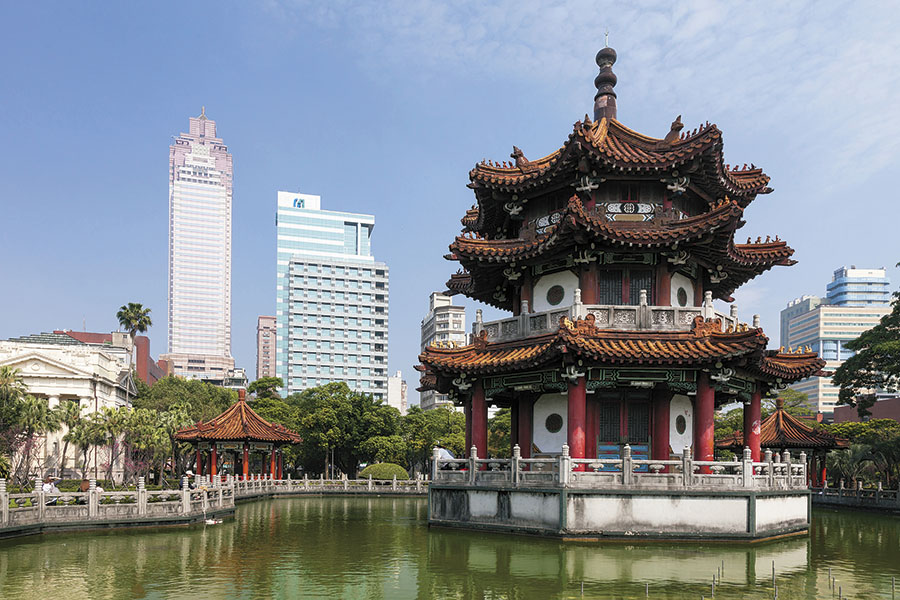 The pagoda, or temple, at 228 Peace Memorial Park, erected in memory of the victims of the 2-28 uprising
Image: JTB Photo / UIG via Getty Images

After that meal, walk around Yongkang Street and Lishui Street in Da’an District. Being right around the university campus gives this area a lovely, young vibe and it also has some interesting retail tucked away in the lanes. If you have room, get a cake and coffee at Oma Ursel’s German Bakery. Being Pune aficionados, my wife and I have a weakness for all bakeries German, and Oma Ursel did not disappoint. Their cakes are generous, the coffee strong and a two-storey European-style cottage amidst the lanes of Taipei makes it a nice place to take a load off.

3 pm
Thus fortified, take on the National Palace Museum. It’s a bit of a commute to an outer suburb, but worth the trip. It has arguably one of the finest collections of Chinese treasures in art, calligraphy, ceramics and jade. The range of work you see across the long sweep of Chinese civilisations (by the end of it, you would have figured out and forgotten the myriad Chinese dynasties, but you will be a more enriched person) is spectacular.

Before heading back downtown, stop by for a while and wander in Shilin District near the station. The neighbourhood has a pleasant buzz to it, and a nifty mix of shops and (surprise, surprise!) food stalls.

And to bring you straight back to the present—and maybe to the future—make your way to Xinyi District for the new Taipei. The Taipei of gleaming glass, upmarket retail and easy disposal of disposable incomes. Even if shopping’s not your thing, the district has some lovely open spaces, wide boulevards and landmarks like the Sun Yat Sen Memorial Hall. The Eslite Bookstore and the iconic Taipei 101 tower are ideal for upmarket retail browsing. 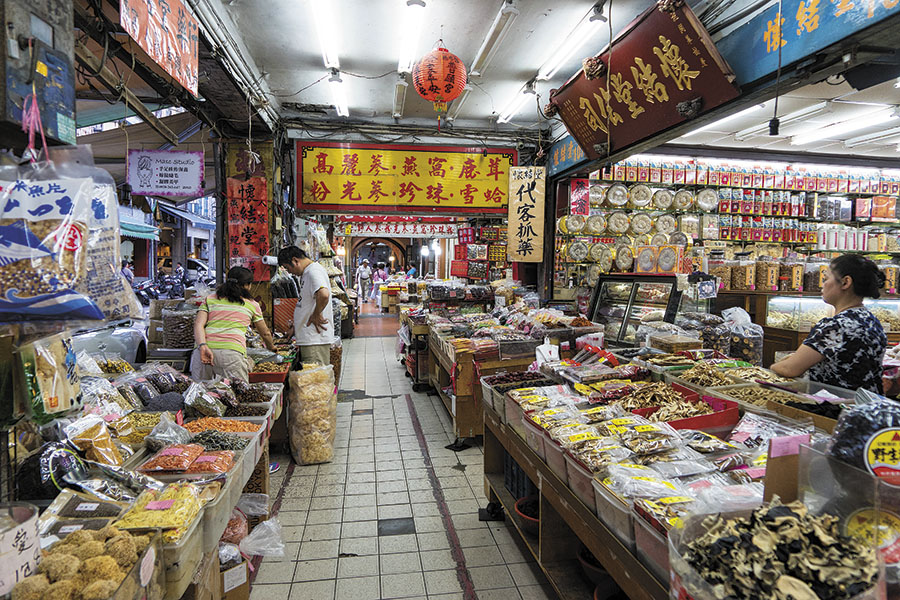 But we didn’t queue up for the views from atop the bamboo-inspired Taipei 101 tower—instead, we homed in on Din Tai Fung housed there, since we hadn’t been able to enter the first outlet. It merits the pit stop for a quick xiaolongbao, or soup-filled pork dumplings, which is (for good reason) their signature dish.

7 pm
Drum roll! This is the time to unveil Taipei’s most endearing feature, the famous night markets. There are several and, unless you are blessed with unnatural metabolism or digestive powers, you’ll probably work through one, at most two, during an extended evening.

First for us was the Raohe night market, one of the oldest and most popular.

And you can see that reputation has been built on a solid foundation—on succulent beef cubes torched and dusted with cumin and chilli, on piping hot, crusty, peppery meat buns, on fresh, springy, grilled squid, on the simultaneously crispy and creamy okonomiyaki, on herbal pork bone soup, on spicy local sausages brushed with chilli oil. The list is long and distinguished. 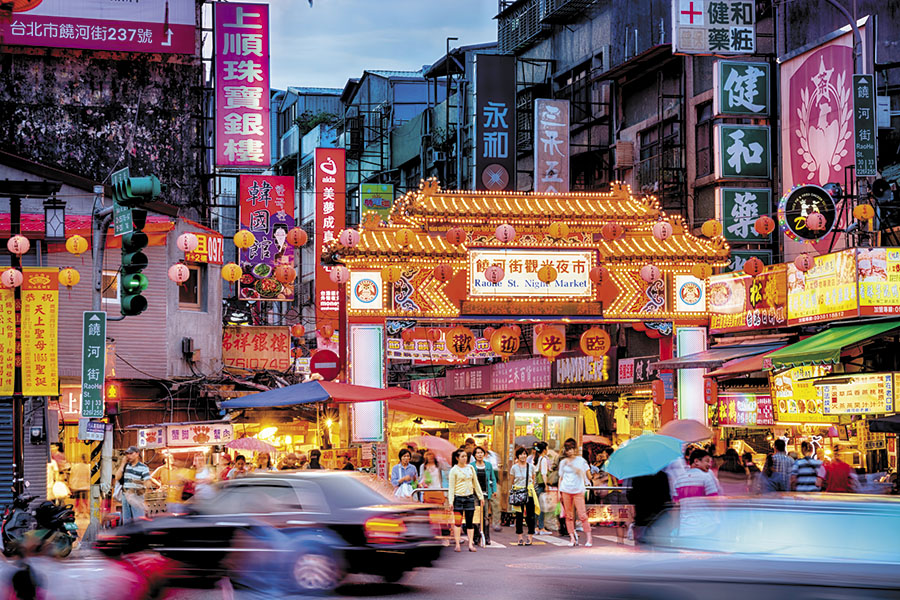 The Raohe night market is one of the oldest and most popular in Taipei, well-known for, among other things, its crusty, peppery meat buns
Image: R. Nagy / Shutterstock.com

If you have the capacity for one more (and if you do, please apply for a bravery award), visit the Ningxia market, where the fare is quite similar, the crowd is less intense, and it is more favoured by locals, which must count for something. It is here that I braced myself, ignored the olfactory, and tried the stinky Tofu. If you are the type who will try most things once, give it a go: It tastes better than it smells.

At this point, you should be done, and probably regretting overdoing the food. As a last stop, you can ponder your excesses over a crisp martini at the glitzy Woo Woo bar at W Hotel in Xinyi District, and crawl into bed knowing you ate more than you should have. But that’s what Taipei is all about.

In this new series, we give you a tasting tour of some of the most exciting cities of the world.