What Do We Owe the Bottom Billion?

Princeton philosopher Peter Singer has been a prominent, often controversial, figure. His most recent book, The Life You Can Save, looks at the responsibilities of individuals for addressing global poverty.

Q: You have written that in addition to an obligation to not harm, we also have an obligation to help. Could you explain that?
It's a mistake to think that our obligations are only to do no harm. I use the example of the drowning child in the pond. If you were walking through a park and came across a child drowning in a shallow pond, you knew you could save the child by wading into the pond and nothing would happen to you except that you would ruin the expensive shoes that you’re wearing, what’s the right thing to do? Everyone would say, you ought to save the child. It’s agreed that if you just walked past saying "I don't want to spoil my shoes," you've done something seriously wrong.

That's an example of the idea that you can do something wrong by not helping. Although that's not exactly the same situation with children dying of poverty-related causes in the world, I think there is a parallel that holds sufficiently to say we ought to be doing something to help those children. 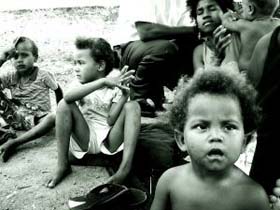 Q: What makes people decide to help or not help?
We are clearly better tuned to helping people we can see in front of us. We are better tuned to helping in situations where the responsibility falls just on us, and isn’t shared with others. There are many psychological factors which cut against our helping anonymous masses. If I say there are 27,000 children who will die today from poverty related causes that could have been prevented, most people will not be moved to act in the same way that they would be if I showed them a photo of a child and said this seven-year-old girl is named Rokia. If you give $500 she can be cured from a disease that will otherwise kill her. In that case, most people, if they are convinced that those facts are true, would give. The bare statistics don't have the same pull.
Q: Globalization has created new connections between people, has it also created a new set of responsibilities?
Sure, we have new responsibilities when we enter into new trading relationships with people. But I think we had responsibilities as soon as we developed the capacity to be able to help the world's poorest people — then we had responsibilities to help them, and I don't think that's dependent on having trade relationships with them. Some philosophers like Thomas Pogge at Yale have argued that there is a special obligation, because we are in relationships with people, to make the relationship a just one within the global institutional order. I don't disagree with that argument; I simply argue that there is also an obligation of what I call "easy rescue," that if you can easily rescue someone or help someone in great need at low cost to yourself, that's something you ought to do.
Q: What do you suggest people do?
What I've principally argued for is that we should be giving a percentage of our income — when I say we, I mean affluent people who are comfortably middle class or above — to effective aid programs working for the world's poorest people. I've set out that scale in my book, The Life You Can Save, and it's also online at www.thelifeyoucansave.com.
Basically if you're earning up to around $100,000 a year, you should be giving between one and five percent of your income. And as you go above that, it scales up to higher percentages. I think these are realistic amounts that people can give without hurting themselves, but the amounts that we would raise, if we put those resources into effective aid, could dramatically reduce extreme poverty in the world.
Q: What is the role of business people?
I'd like to see a program of workplace giving specifically to relieve global poverty. Companies could have a line on the forms presented to new employees saying it's the company's policy to donate some percentage of employee salaries – it might just be a quarter of one percent — to aid the world’s poor, but if you don't want to do that, then tick this box. That arrangement preserves freedom of choice, but the effectiveness of simply reversing the default, so that you give unless you opt out, is enormous. This sort of behavioral economics was the subject of a recent book by Cass Sunstein and Richard Thaler, Nudge.

If corporations then match all donations, I think that would set an excellent example. It would get employees thinking more about global poverty. And it would also help create the feeling that the company is an ethical enterprise doing its part to solve world problems, which has been shown to have a beneficial effect on the morale of the workforce and on things like workforce retention.


Q: You have pointed elsewhere to a study coming out of Duke showing life-saving measures taken by the U.S. healthcare system cost $2.2 million per person and the EPA has set a figure of $7.22 million as the theoretical value of a person. What is the significance of putting numbers on what a life is worth?
When we're looking at saving a life in developing countries, we're often talking about hundreds of dollars. Estimates vary with the type of program. Some appear to save a life for $300 to $400, Other go as high as $800 or even $1200, but we don't get anywhere near the figures of what we spend to save a life in the United States, which are thousands of times higher.

I hope people seeing those numbers will ask themselves whether they really support this, whether our professed belief in the equal value of all human life is just rhetoric or something that we live by. What does it say that we can accept these figures and do nothing about the situation?

If you say, I do believe in the equal value of all human life, then I think you have an obligation to give to those organizations that are saving human lives for hundreds of dollars rather than for millions of dollars. And that's something that I would imagine pretty much all of the people reading this have the capacity to do.

Q: Should businesses take more account of philosophy? What might change if public corporations actually brought philosophers expert in applied ethics onto their boards of directors?
Well, it would give corporations a greater awareness of the kind of issues we have just been discussing, among other things. I'm not saying that philosophers have direct insight into what's right or wrong, and they certainly shouldn't be regarded as authorities on those matters. Everybody is entitled to their own opinion. But philosophers tend to reflect more on ethical issues. That's their profession. And they encourage others to think. So it seems you'd get a better discussion going about ethics if you did have philosophers on the boards of corporations.

Q: Has the pace of globalization challenged applied ethics or philosophy in what issues should be addressed?
Certainly philosophers have started thinking about a different range of issues, and there has been a lot more discussion of issues relating to global obligations about trade questions. That area is definitely developing and moving ahead, I guess, in response to the facts that we've become aware of. To take another global issue, twenty years ago there were virtually no philosophers looking at climate change. There are quite a number of philosophers looking at climate change now. So, sure, philosophers are responding to the new ethical issues emerging in the global age.

Tweets by @forbes_india
Courting So-So Customers Can Be Good for Business
Abhinav Bindra: 'I Am in a Bad Frame of Mind'