The rise and rise of Arijit Singh

At 27, Arijit Singh is already considered the voice of his generation. But despite his ability to reach the loftiest of notes, the singer-music programmer has his feet planted firmly, shyly, on the ground 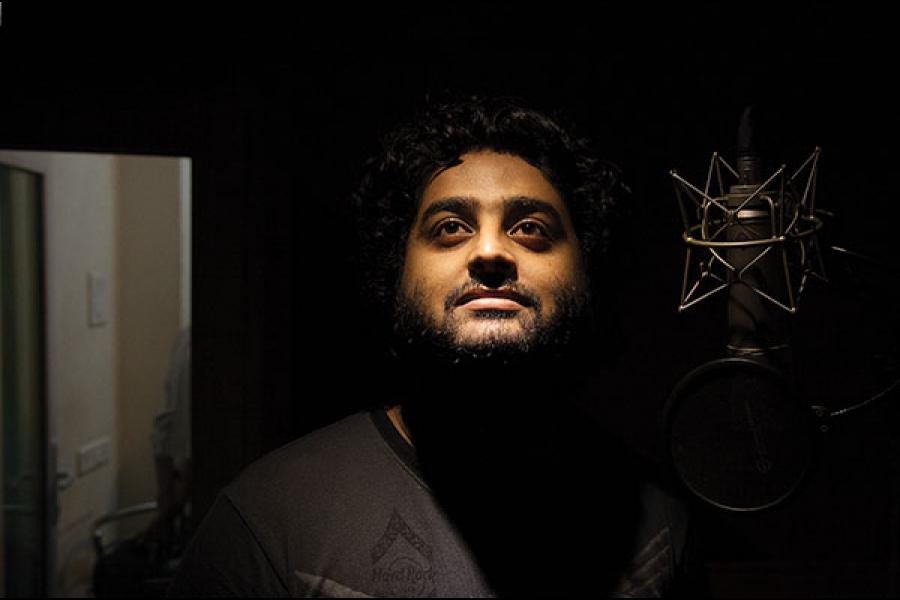 Arijit singh detests media interviews. He really does. Our calls and messages to his phone went unanswered for days. His publicist couldn’t confirm an appointment for the longest time. When she finally scheduled a meeting, it came with a rider. “Please be patient. He’s one of the most media-shy persons I have seen,” she said of the 27-year-old singer, whose ‘Tum Hi Ho’ (Aashiqui 2) transformed him into an overnight sensation. That is why, when we meet Singh (about an hour before midnight at a decrepit recording studio in suburban Mumbai), we ask: Why hide?

“I hate being a celebrity,” says Singh, running his fingers through a tousled mop of curly hair. “I came into music because I loved it, not because I wanted to be famous. My singing career happened by fluke.” Singh wasn’t even aware when ‘Phir Mohabbat’ (Murder 2), his first Bollywood song, got released in 2011. “I’d sung it in 2009 and had forgotten about it. It was only when a friend of mine told me that I knew it had released. Even after it became a hit, my desire for playback didn’t grow, I was too busy programming music,” he says.

In fact, when, as an 18-year-old, Singh lined up for the auditions of Fame Gurukul (a music reality show) in 2005, it was not because he wanted to be a part of the Bollywood music industry. “It was to check where I stood. Unless you compete, you won’t know,” he says. Having grown up in West Bengal’s Murshidabad, he trained in classical music under Rajendra Prasad Hazari. And it was his guru who insisted that he audition for the show because “classical music was a dying tradition”.

At the time, music reality shows were a dime a dozen: Almost every television channel had one. That Fame Gurukul had singer-composer Shankar Mahadevan in the jury helped Singh make up his mind. “He was the only reason why I joined that show. He has a classical background and astounding versatility,” says Singh. “Shankarji and I have shared a unique relationship. He has helped me in the years after Fame Gurukul and continues to guide me even now. I have turned to him whenever I have been in financial trouble and he has given me work.”

In his role as a judge of the show, Mahadevan handled many a young talent. Some winners, too. But he’s reserved the fondest words for a lad who couldn’t even finish in the top 5 (Singh was placed No 6 in the show). “There are certain people whom you meet and they stay in your mind forever. You know that person has genuine talent and has to come up in life some time or the other. Arijit is that kind of a person,” says Mahadevan.

Though Singh couldn’t win Fame Gurukul, it gave him an excuse to stay back in Mumbai. He then entered another reality show, 10 Ke 10 Le Gaye Dil, a musical face-off between the winners of Fame Gurukul and Indian Idol. Singh not only won the battle of the titans, but also pocketed the prize money of Rs 10 lakh. Some friends wanted him to buy a Mercedes, some others asked him to invest his earnings, but he went along with the advice of a recordist from the show and built a recording setup of his own. That is where his journey with music programming began. The self-taught programmer freelanced with industry heavyweights, including Shankar-Ehsaan-Loy, Vishal-Shekhar and Mithoon Sharma. 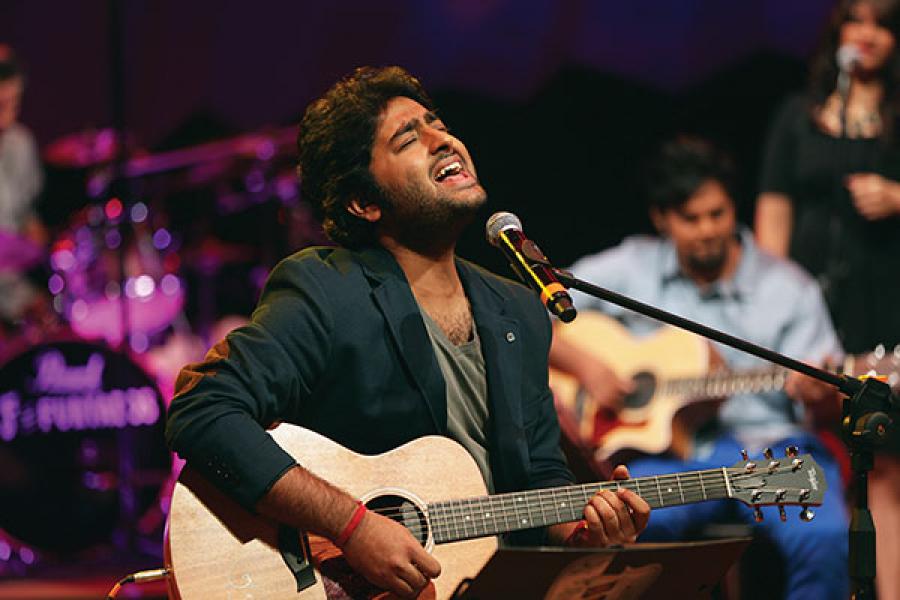 Image: Parag Gopale
Arijit Singh is so passionate about his work that he refuses to sing songs he does not like
Those were the days when Bollywood playback was dominated by conventional voices—ones that could fit any leading man—and opportunities for a character voice, as Singh regarded himself, were bleak. Mahadevan recounts his frustration when he once tried to convince a producer to retain Singh’s version of a certain song. “I told him Arijit was the voice of the future, but he insisted that he wanted a ‘popular’ voice,” he says. Mahadevan had to eventually get the song dubbed by another singer.

Singh, meanwhile, continued to programme music—an activity he enjoyed—and doing one live show a month took care of his rent. He was also trying to keep up with a changing circadian cycle, where his nights would often stretch into the wee hours. “I lived in Lokhandwala [an upmarket Mumbai suburb and film hub], which was bustling even in the middle of the night. Also, this was the first time I was living alone. The excitement of it all would keep me awake,” he smiles.

In 2010, he started working with hit machine Pritam on three films—Golmaal 3, Crook and Action Replayy. Singh reflects upon those days with much fondness. “Pritam’s studio was a song factory. I loved it. He had 16 films that year, each film had 10 tracks. That’s 160 songs a year, complete madness,” he says. It was in that “work-and-smoke zone” that Singh started singing scratches (rough cuts of songs) on Pritam’s insistence and realised that the texture of a Bollywood song was remarkably different from that of a classical bandish. He sang scratches every day, sometimes even 4-5 a day, to master the trick and, soon, it became a habit.

A year later, when he was programming ‘Raabta’ (Agent Vinod), Pritam wanted him to sing a classical arrangement in the song. “He liked it and made me sing the entire composition. It became a major hit,” says Singh.

Subsequently, ‘Duaa’ (Shanghai) brought him to the notice of many music composers, including those who would give him ‘Tum Hi Ho’ a year later. ‘Phir Le Aaya Dil’ (Barfi!) earned him his first Filmfare nomination in 2013. “But it was Aashiqui 2 that made him a rage and a household name,” says Jeet Ganguly, one-third of the trio that scored the music for the film. “After ‘Tum Hi Ho’, audiences discovered Arijit’s earlier songs.”

Ganguly had stumbled upon Singh’s ‘Duaa’ on YouTube in his quest for a “fresh voice” for the Mahesh Bhatt-produced Aashiqui 2. “Bhatt saab wanted a music revolution just like Aashiqui had brought about in the 90s,” he says. It was easy to convince the producer with the first-recorded song ‘Tu Hi Yeh Mujhko Bata De’. And he continues to be charmed till date.

“Arijit is an expression of the 21st century. The youth sighs at his voice,” says Bhatt. “His next song for us is the title track of Khamoshiyaan. When Alia [actress and his daughter] heard the song, she said it took her breath away. These emotions demonstrate the singer’s contemporariness. He will be a major creative force to reckon with in the years to come.”

Singh is as prolific in Bollywood as he is in the regional music industry. He keeps alternating between Mumbai and Kolkata to lend his voice to some iconic Bengali melodies and hit his favourite chai shop around the street corner. “He hasn’t changed one bit even after becoming the toast of the nation. He still enjoys that streetside tea,” says Indraadip Das Gupta, a prominent music director in Tollywood and one of Singh’s mentors. 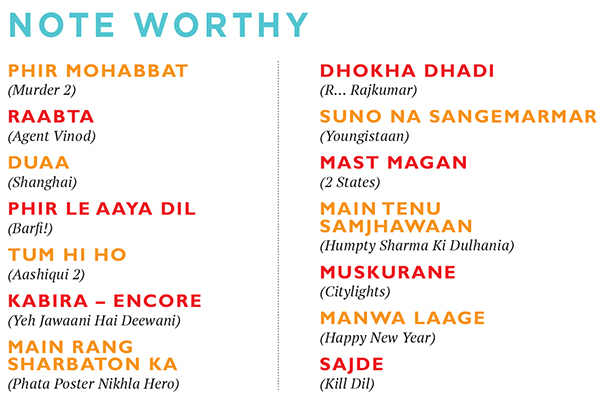 The first time Singh recorded a Bengali film song was almost by accident. He was programming for Das Gupta, whose project Hawa Bodol had a composition (‘Bhoy Dekhash Na Please’) to be sung by singer-lyricist Mohan Kannan. Singh was so much in love with the track that he insisted on recording a version, which was eventually retained in the film album, marking his entry into the industry. “His was a voice that was just waiting to hit the market,” says Das Gupta, who has subsequently given Singh some of the best songs of his career, most recently, ‘Asatoma Sadgamaya’ (Khaad) which the singer calls his “most satisfying” work.

He may be polite to a fault, but Singh is so passionate about his work that he is ready to turn down playback requests. He openly refuses to sing songs he doesn’t like. “Sometimes, I am compelled to sing because I can’t go to a studio and then say no. So, these days, I have started asking for songs beforehand. I hear them first and decide whether I would like to go ahead,” he says.

Given his vast repertoire—from the sonorous ‘Phir Le Aaya Dil’ and the playful ‘Dilliwali Girlfriend’ to the rustic ‘Re Kabira’—it is hard to imagine a genre that Singh wouldn’t like. He is averse to fusion music though. “I am a purist when it comes to songs. I don’t like much experimentation,” he says. There’s no formula for a good song, he says, and he lets his ears and good lyrics decide for him. And he is finicky about his own work too. “I often find flaws with the way I have sung a song and realise later that I could have done things differently,” he says.

One of the experiences Singh cherishes is that of working with Vishal Bhardwaj in Haider. “I always dreamt of working with him. His studio has a very positive vibe. His music is very authentic,” he says of the composer-filmmaker.

There are many things in Singh that make him one of us. For one, he hates deadlines. Then, there is the corporatised aspect of the industry he believes that he doesn’t belong to. There are also other things, good and bad, that he finds “unreal”—widespread adulation and public scrutiny—but which keep him on his feet. Except when he retires to his home in Murshidabad. “That’s the only place where I unwind,” he says.

It is unusual for a singer at the peak of his career to think of his sunset years. Though music directors such as Ganguly reckon that Singh is the “next constant in the industry”, the freshly-minted star is aware that the shelf life of an artiste is often cut short by fast-evolving audience tastes. However, he doesn’t despair. “There are so many things to do the day I go down. Filmmaking, for one. [An amateur filmmaker, he has been experimenting with cameras for years],” says Singh.

But that can wait. For the time being, let’s hope, he’ll let the music play.

Show More
Get the latest stories, videos, and podcasts from Forbes India directly in your inbox every Saturday
Thank you for your comment, we value your opinion and the time you took to write to us!
Comments 38

Tweets by @forbesindia
2014 Celebrity 100 list: How the stars measure up
Top Bollywood producers of 2014