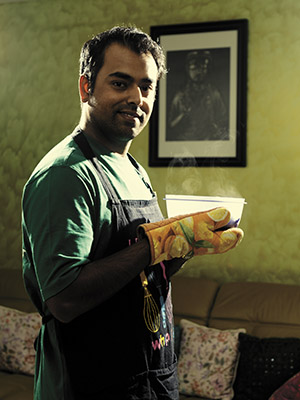 Image: Bmaximage
When he stayed alone in Bengaluru, Anirban Lahiri learnt to cook. Soon, it turned into a passion

As a young boy, Anirban Lahiri, the son of an army doctor, would play golf with his father at army golf courses. He remembers feeling out of place playing with “the Major sahabs and colonels”. A junior golf competition that he attended in Kolkata when he was 12 changed that. “I suddenly saw 60 kids there, and I thought, ‘Wait a minute, there are other kids that play this game?’ ” Elated, he continued playing golf, and in time, fell in love with it. Lahiri turned pro at 20, and now at 28, he is ranked 43rd in the world.

“A lot of the guys that I’m now playing alongside were my idols,” he confesses. Consequently, Lahiri has had to develop a strong sense of belief in his own abilities to succeed. His performances in the last two years, he says, have assured him that the belief was not unfounded. Last year, he won the Asian Tour Order of Merit, received a PGA Tour card and became the first Indian golfer to participate in the President’s Cup (a series between a US and an international team).

His newfound belief was perhaps most prominently on display at the PGA Championship at Whistling Straits, US. Having won the prestigious Long Drive Competition preceding the major, he was in the top 10 going into the final round. “I believed that I could win it if I had a dream round on that Sunday,” he says. Lahiri finished fifth, the highest ever position for an Indian golfer at a major.

“Anirban was always hardworking and focussed; it was only a matter of time before the results would show,” says Gaganjeet Bhullar, Lahiri’s 2006 Asian Games teammate and a member of the 2014 Forbes India 30 under 30 List. Lahiri, who now counts Tiger Woods and Ernie Els among his friends, says he is getting more comfortable with every major. Many believe that he may well be India’s best golfing prospect yet. At 28, he has enough time to prove it.