30 Under 30: Yash Bhanage - Serving food that tells a story 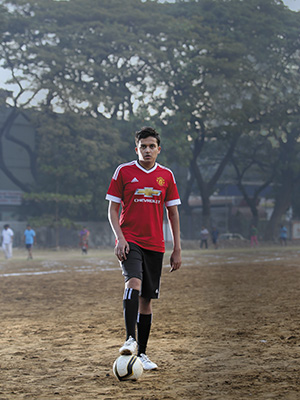 Image: Joshua Navalkar
Even when he’s hosting guests at his restaurant, Yash Bhanage never forgets to cheer for Manchester United

Growing up, Yash Bhanage had no fascination for the kitchen. Instead, every time his family would eat out, it’s the restaurant managers—dapper in their uniforms, welcoming guests with a smile—who would catch his eye. So, despite studying science in high school, the charm of running restaurants took Bhanage out of chemistry labs and, first, to the Institute of Hotel Management in Goa and later to Cornell University to study hospitality management.

While working at Mumbai’s Grand Hyatt, he chose the front office. “In a month, I knew the job wasn’t for me,” he says. He sought a transfer to the restaurant and started as a waiter. The journey that began with 16-hour shifts at Grand Hyatt’s Celini has culminated in a 24x7 role steering The Bombay Canteen (TBC), a restaurant that re-imagines Indian food, with an emphasis on seasonal produce, in a fun way. Like the thepla that morphs into a taco with pulled pork filling, or the Sindhi tuk that’s inspired by the Latin tostones and cooked with arbi.

When TBC was masterminded by Bhanage and his Cornell classmate Sameer Seth (34-year-old banker-turned-restaurateur) in late 2012, they knew they weren’t going to look East or West for inspiration, but mine into the country’s culinary traditions and turn them on their head. Give Renu aunty’s rogan josh, for instance, a vegetarian makeover. Says Anoothi Vishal, food writer and critic, “The thing with modern Indian gastronomy is that you need to understand the classics first, not just experiment with it for the sake of theatre. That’s exactly what TBC does. For somebody as young as Yash to steer it is remarkable.” Since TBC’s launch last February, Bhanage has impressed as much with his ability to tell a story through food as well as with his hands-on stewardship: He can clear tables on a busy Saturday night, get behind the bar to whip up a cocktail, and even shut down the restaurant for a day to party with his staff.

Clearly, like his food, Bhanage doesn’t take himself too seriously.