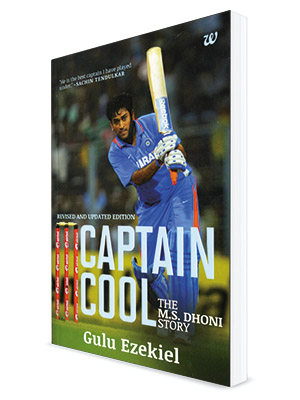 Everyone talks about MS Dhoni’s meteoric rise but few have spent time cataloguing his journey as painstakingly as veteran sports journalist Gulu Ezekiel. The 2013 updated version of his book Captain Cool: The MS Dhoni Story is a must-have for die-hard fans of Dhoni and Indian cricket. The book does not have any narrative as such, and, instead, reads like a long, insightful match report. It is one man’s full-throttle journey from obscurity to international stardom.

The book is at its strongest at the start. Ezekiel has used his extensive network of contacts in the world of cricket, including former players, coaches and administrators, to highlight Dhoni’s humble Ranchi roots like no one else. The first two chapters, ‘Early Years’ and ‘First Class Cricket’, give a great insight into the kinds of challenges Dhoni faced while growing up: He wasn’t a natural like Sachin Tendulkar; he was rejected by the Railways Ranji Trophy team; playing for a small Ranji side like Bihar wasn’t easy either, and the 2001-02 season was an “unmitigated disaster”. Ezekiel makes us realise what it means to slog it out in cricket’s dusty domestic circuit.

Statistician Mohandas Menon adds a lot of value, especially with Dhoni’s batting figures when he played for Bihar, Jharkhand and East Zone. The book is peppered with interesting nuggets like this one: Dhoni developed a unique technique by playing with a tennis ball on 18-yard pitches in Kharagpur, where he moved in 2001 for his first job as a railway ticket collector. On these pitches, bowlers consistently bowled yorkers and Dhoni had to learn to use his shoulders and forearms to dig the ball out—a skill that helps him today.

What is most enjoyable is viewing cricket through the prism of a wicket keeper. We are so used to stats about batting averages and wickets, but what about stumpings and catches?  Ezekiel writes, for example, “Dhoni must have been disappointed not to have taken a catch, or made a stumping on his ODI debut, but at least he did not concede a bye.”

It’s not a book for all cricket or sports fans though, and certainly not for casual readers. In essence it is a linear, largely repetitive archive of one man’s cricket record. Granted, the man has a sensational story and the records are extraordinary, but for those who have watched his career blossom since he made it big, the second part of the book—a blow-by-blow account of his recent matches—is fairly drab.

This is the kind of book that will be immensely interesting to read 20 years down the line, when we want in-depth reporting on internal team dynamics and Dhoni’s fielding changes in crunch games.

The photographs are lacklustre. The one of him in his Ranchi school team and him riding his motorcycle around the field at Faridabad are the only ones I’ll remember. The rest are things you’ll find in a Google search. The stats that make up the appendix are largely irrelevant—since they change with every match, and will continue to do so till Dhoni retires—and more accessible online.

The book does not conclude with any analysis of what keeps Dhoni cool under pressure, which is disappointing given the book’s title. Instead, it explores the challenges of bearing the triple responsibility of being a specialist batsman, wicket keeper and captain.