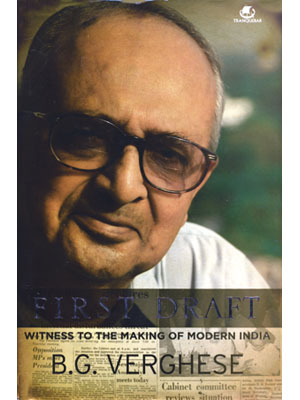 In the preface to First Draft, B.G. Verghese says, “my reports and reflections from day to day were my story, a worm’s eye view of the world as it passed me by.’’ The view is of a person who stood by the ringside as events unfolded, shaping the history of India.

First Draft is an account of the past half-century of the country as seen by Verghese; mostly as a journalist, briefly as information advisor to Prime Minister Indira Gandhi, and often as an activist.

Verghese has systematically recorded how successive prime ministers, especially Indira Gandhi and her son Rajiv Gandhi, undermined democratic institutions and tore apart the fabric of the Indian society in pursuit of their narrow political objectives. He describes Indira Gandhi’s mishandling of the devaluation of the rupee in 1966. She felt let down by her technical experts, who could not anticipate the political fallout correctly. In the process, she separated the Lok Sabha elections and the elections to the state assemblies to dilute opposition to the devaluation. Hindsight has proven that that separation singularly affected economic planning in the country. He vividly describes the Emergency.

Often, you feel that Verghese did not say enough. In his defence, he says himself that he had to cut out about 100 pages because his publisher complained it was too long.

By no means is First Draft an exhaustive modern history; it is a chronicle of major events in a fledgling democracy,  a journal of the past 50 years of India and its key actors.

First Draft: Witness to the Making of Modern India by B.G. Verghese

Tweets by @forbes_india
John le Carre Has A Spy for All Seasons
Pink Alert: How Real Is The Threat of Breast Cancer?