At This Eatery, It's A Free For All

Ajay Jain has built his business on love and fresh air almost! 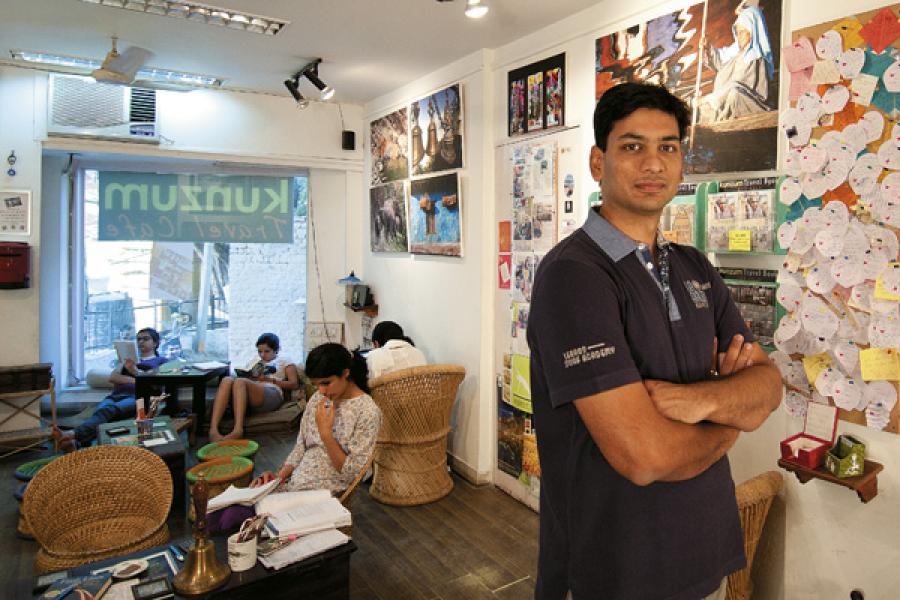 All Ajay Jain wanted was for people to buy his photographs. Though he was an engineer and an MBA and had worked in various industries ranging from IT to media, his passion lay in travel and photography.

But he was not able to sell enough of his pictures through exhibitions. So he started a gallery and started marketing it online. Yet, nothing really worked. That’s when the 41-year-old decided to transform the gallery in South Delhi’s Hauz Khas Village into a café with wi-fi, coffee, tea and cookies. The attraction was that all of it was free. Customers could just put whatever they felt like in a small box kept at the entrance of the tiny hangout with a dozen tables of different sizes and shapes. The box was kept in such a way that no one could see who was putting what in.

“I have got everything from a torn Rs 5 note to Rs 500 and dollar and euro bills,” says Jain.

The idea worked as more and more people came visiting and brand Kunzum began to gain popularity, both online and offline.

Kunzum Travel Café is four years old now and gets about 100 customers on a typical week day. The number swells to almost 200 during the weekend.

The “treasure box” at the entrance gets an average Rs 50 per cup of coffee or tea that Kunzum serves.

“The money covers my overhead costs that include staff salaries and electricity bills,” says Jain who bought the space three years ago.

Along with books and photos, he now has added more revenue streams—advertisements inside the café, ‘specialised’ travel services and events like book readings and movie screenings that can bring Rs 6,000 for a two-hour booking.

While Jain admits that he initially discouraged backpackers “who would laze around the whole day doing nothing”, his clientele has since filtered itself. Today his average customer is a well-to-do professional in the 20-40 year age bracket, loves travelling and alternative cinema (most of the movies screened at Kunzum fall into this category) and most importantly, has a conscience.

“I usually pay about Rs 100 to Rs 150 every time I visit Kunzum,” says Abhinav Maker, a 27-year-old lawyer who likes the cafe for its “homely feel”. In the one-off time that he didn’t pay, a “guilty-feeling” made Maker go back to Kunzum and compensate for “not being good”.

Martin Spann calls this the “social norm” reason that drives consumers to pay even if they can get away without shelling out money. In his study with colleagues Ju-Young Kim and Martin Natter—Pay What You Want: A New Participative Pricing Mechanism—the economist found that customers also paid “because they don’t want the business, which they like, to close down”. This, says the professor at University of Munich, is the “strategic reason”.

Jain is not the first one to bet on the honesty of customers to build a business and brand. In July 2007, musician Prince was initially ridiculed when he gave away copies of his album Planet Earth for free. But the ridicule turned to admiration when his 21 concert dates were sold out.

In India, the Annalakshmi food chain has for 26 years let its customers decide the bill in most of its outlets. But with volunteers as waiters and kitchen help, the hotel chain works on a not-for-profit model. Internationally, though, many food outlets, including Lentil As Anything in Australia and One World Café in the US have used pay-as-you-wish as a successful business model.

But traditionally, a business like Jain’s is limited by its inability to scale, says  Devangshu Dutta is CEO, Third Eyesight.

Adds Saloni Nangia President, Technopak: “A few formats which are targeted at the premium niche audience would be fine, but extending this to a broad consumer base would be a challenge.”

Jain has been lucky until now. Hauz Khas Village, with its fashion studios and art galleries, attracts exactly the kind of crowd that Kunzum targets. More importantly, the café is surrounded by an affluent South Delhi neighbourhood.

“It is a profitable business and am hoping to reach Rs 1 crore in revenue at the end of this year,” adds Jain. He is in the middle of developing travel-content applications that will be available on Kindle and iPad. That’s easy. The tricky part is scaling up. Jain is planning cafes in Gurgaon and Bangalore where rents are higher.

He says he has money stashed away to open more outlets but wants to perfect a business model that will survive on rental space. He is incubating a bigger play in travel services to be hosted from the café. “There are a lot of niche travel products that the mainstream travel companies don’t provide and we want to fill that gap,” says Jain.

He is also on the verge of franchising the Kunzum brand, with the first franchisee outlet expected to come up in Connaught Place, the popular shopping destination in the capital. That is perhaps the biggest asset that Jain has built by doling out coffee and cookies—the Kunzum brand.

Tweets by @forbes_india
A New Deal For Hackers
Gujarat Pipavav: Profit in Sight For This Port