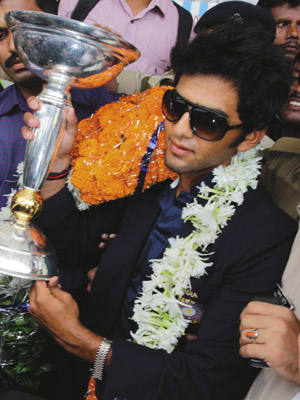 After Unmukt Chand led his team to the Under 19 World Cup trophy, there has been a lot of talk about youngsters breaking into the national team. We look at those who made it big, those who didn’t, and those still hoping for another chance.


THEY MADE IT BIG:
Batch of 1998: Virender Sehwag and Harbhajan Singh. Both have been mainstays of the national side for over a decade now. They blossomed under Sourav Ganguly, and have been part of most of India’s big moments in the 2000s: The 2003 World Cup, the 2007 T20 World Cup and the 2011 World Cup.

Batch of 2000: Yuvraj Singh, possibly India’s best batsman in the shorter formats since the turn of the century. Highlight: Six sixes off Stuart Broad at the T20 World Cup in 2007.

Batch of 2004: Suresh Raina, MS Dhoni’s blue-eyed boy. He often comes in at the later stage of a game to provide impetus to the run-rate. He does a good job of it too.

Batch of 2008: Virat Kohli, the future of Indian cricket. His aggression and attitude is backed by talent and hard work. Watch out for Kohli posters, shoes, bats, cola drinks. He will be the face of Indian cricket for the next decade.

2000: Mohammad Kaif, Ajay Ratra, Venugopal Rao, Reetender Singh Sodhi—possibly the most talented bunch. They shone in bits and pieces, but burnt out too soon.

2002: Parthiv Patel. The diminutive keeper almost got into Steve Waugh’s head during the Aussie’s last match, but he couldn’t keep himself in the Indian team once Dhoni came along.

STILL IN CONTENTION:
2002: Irfan Pathan. Once touted as the next big thing, he’s now trying to force his way back.

2004: Robin Uthappa, Shikhar Dhawan, Dinesh Karthik, RP Singh. Dhawan, Karthik and Singh keep popping in and out of the team.

2006: Rohit Sharma, Cheteshwar Pujara, Piyush Chawla. Sharma seems intent on wasting his talent, Pujara is trying to cement his place as India’s No. 3 batsman in Tests, while Chawla is trying to spin the ball.