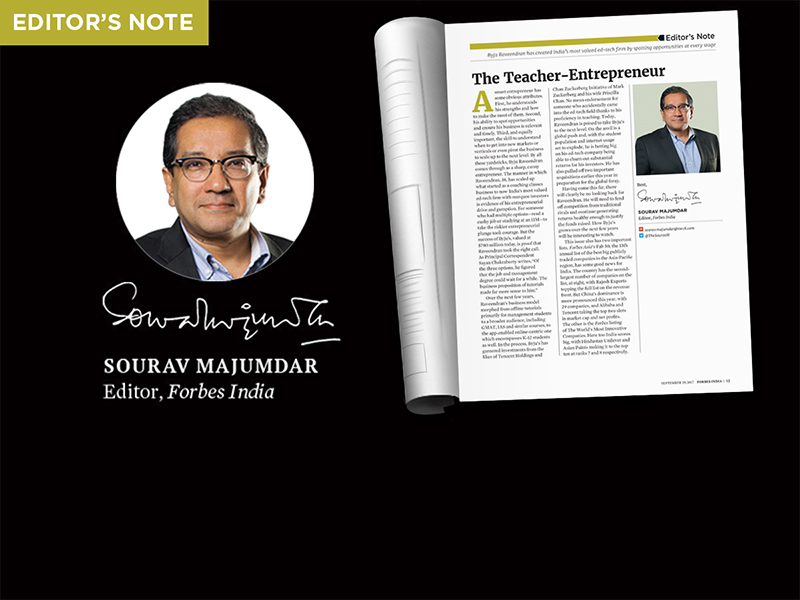 A smart entrepreneur has some obvious attributes. First, he understands his strengths and how to make the most of them. Second, his ability to spot opportunities and ensure his business is relevant and timely. Third, and equally important, the skill to understand when to get into new markets or verticals or even pivot the business to scale up to the next level. By all these yardsticks, Byju Raveendran comes through as a sharp, canny entrepreneur. The manner in which Raveendran, 38, has scaled up what started as a coaching classes business to now India’s most valued ed-tech firm with marquee investors is evidence of his entrepreneurial drive and gumption. For someone who had multiple options—read a cushy job or studying at an IIM—to take the riskier entrepreneurial plunge took courage. But the success of Byju’s, valued at $780 million today, is proof that Raveendran took the right call. As Principal Correspondent Sayan Chakraborty writes, “Of the three options, he figured that the job and management degree could wait for a while. The business proposition of tutorials made far more sense to him.” 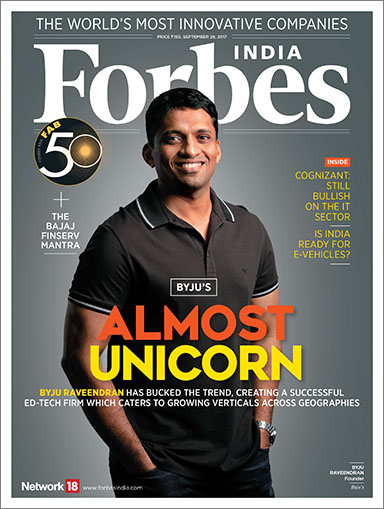 Over the next few years, Raveendran’s business model morphed from offline tutorials primarily for management students to a broader audience, including GMAT, IAS and similar courses, to the app-enabled online-centric one which encompasses K-12 students as well. In the process, Byju’s has garnered investments from the likes of Tencent Holdings and Chan Zuckerberg Initiative of Mark Zuckerberg and his wife Priscilla Chan. No mean endorsement for someone who accidentally came into the ed-tech field thanks to his proficiency in teaching. Today, Raveendran is poised to take Byju’s to the next level. On the anvil is a global push and, with the student population and internet usage set to explode, he is betting big on his ed-tech company being able to churn out substantial returns for his investors. He has also pulled off two important acquisitions earlier this year in preparation for the global foray.

Having come this far, there will clearly be no looking back for Raveendran. He will need to fend off competition from traditional rivals and continue generating returns healthy enough to justify the funds raised. How Byju’s grows over the next few years will be interesting to watch.

This issue also has two important lists. Forbes Asia’s Fab 50, the 13th annual list of the best big publicly traded companies in the Asia-Pacific region, has some good news for India. The country has the second-largest number of companies on the list, at eight, with Rajesh Exports topping the full list on the revenue front. But China’s dominance is more pronounced this year, with 29 companies, and Alibaba and Tencent taking the top two slots in market cap and net profits. The other is the Forbes listing of The World’s Most Innovative Companies. Here too India scores big, with Hindustan Unilever and Asian Paints making it to the top ten at ranks 7 and 8 respectively.