Crocs: It's gotta be the shoes

Like all fads, Crocs soared—and crashed—based on hype. A new CEO is focusing on (gasp!) the product 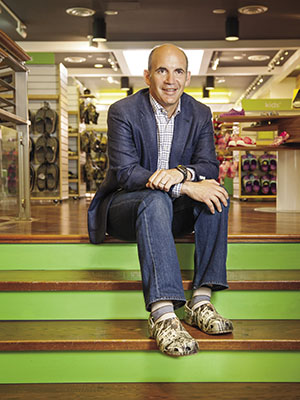 Image: Stephen Ramsey for Forbes
Run, don’t walk: Crocs CEO Gregg Ribatt has a background in footwear, which makes him a rarity in the company’s executive history

It was the kind of moment fashion brands dream about. There was tiny Prince George, out with his royal mum in June, running around on the grass in front of a horde of paparazzi. On his feet? Little blue Crocs. Within hours shots of the romp were on websites around the world. Sales of the ungainly plastic clogs spiked at Amazon.co.uk. “We were thrilled to see Prince George wearing Crocs,” says CEO Gregg Ribatt.

That’s likely the understatement of the year, because if any brand could use a moment, it’s this one. After booming through the 2000s with sales that rocketed from $1.2 million in 2003 to nearly $850 million just four years later, the company has been in a tailspin. By 2013 sales hit $1.2 billion, but profits were down 92 percent year-over-year to $10.4 million. Shares that October hit a low of just over $12, 43 percent below the IPO price and an 84 percent fall from their 2007 peak. Nine of its top 10 execs at the time had no experience in the footwear business. Under their leadership the company had trouble with everything from order fulfillment to products that bordered on the ridiculous (holey clogs lined in fleece?). It nearly went under—twice. The company considered going private. “This is a brand that’s succeeded in spite of having no real good leadership behind it,” says analyst Jim Chartier of Monness, Crespi, Hardt & Co.

Enter Blackstone, the private equity shop. In January 2014 it swooped in with a $200 million investment for a 13 percent chunk of the company. Crocs’ board put Ribatt, a consultant to Blackstone during its review, in charge.

A shoe vet, he helped lead two companies to successful exits: As an executive vice president and COO at Bennett Footwear he shepherded brands like Via Spiga, Franco Sarto and Etienne Aigner until it was sold to Brown Shoes for $205 million in 2005; at Collective Brands he helmed the performance and lifestyle group until Wolverine Worldwide acquired the group for $1.24 billion in 2012.

Shoes run in his family. His great-grandfather made inner soles; his grandfather sold forms for crafting shoes. His father met his mother at a footwear company. Some dads stop for hot dogs on the way to Little League. Ribatt’s father stopped to go shoe shopping. “I grew up in and around the business,” says Ribatt.

In Q4 Crocs will offer its new spring styles to capitalise on cruise season, a smart move it has never taken previously. Going into spring 2016 Crocs will have 50 percent fewer products, Ribatt says, and will focus on its core: Selling plastic clogs, as well as more attractive moulded flip-flops and sandals.

It’s an overdue return to the company’s roots. In 2002 Scott Seamans, a guy from Boulder, Colorado, stumbled across a clog made by Canada-based Fin Project NA out of a waterproof, bacteria-resistant material and enlisted three friends to turn the shoe into a company.

One was Ron Snyder, an exec at Flextronics, the second-largest electronic contract manufacturing firm in the world, who served as CEO from 2005 to 2009. Under him the company went public in February 2006, raising $208 million—more than Nike or Reebok in their initial offerings. By 2007 Crocs had a $6 billion market cap with shares trading at $75. Snyder acquired new brands and expanded its product offerings from 25 models in 2006 to more than 250 the following year. But he had trouble with industry fundamentals, like delivering the right styles on time. In 2007 Crocs produced too many Classics clogs and ended the year with an inventory glut. The next year demand was up for newer styles, and it missed sales.

“Since they were $30 shoes and for the second year in a row they couldn’t deliver what [stores] were told what they could get, the retailers said, ‘See you later,’” says Sam Poser, an analyst at Sterne Agee. By 2008 sales dropped 15 percent to $722 million, and the company posted a $185 million loss.

John Duerden, a former Reebok chief with a reputation for specialising in turnarounds, took the helm in 2009 and stabilised the company, consolidating warehouses, reducing inventory, and boosting retail and internet sales. He left after a year, but Crocs did well on the many changes he made, according to analysts.

So far Ribatt hasn’t been able to pull out of the funk. Quarterly profits are down year-over-year, and shares are trading around $14.50 after hitting a high of $16 in May. But analysts are hopeful: 55 percent of those who cover the stock rated it a buy in July, compared with just 10 percent before Ribatt took over.

Or will, he hopes. Baby steps.

Tweets by @forbes_india
Vivek Ramaswamy: Boy in the bubble
Investors show a growing appetite for food