Seeing another $15-billion internet company—like Flipkart—grow within a decade is not the new normal, says the India Arm of Accel Partners, who were early backers of Facebook 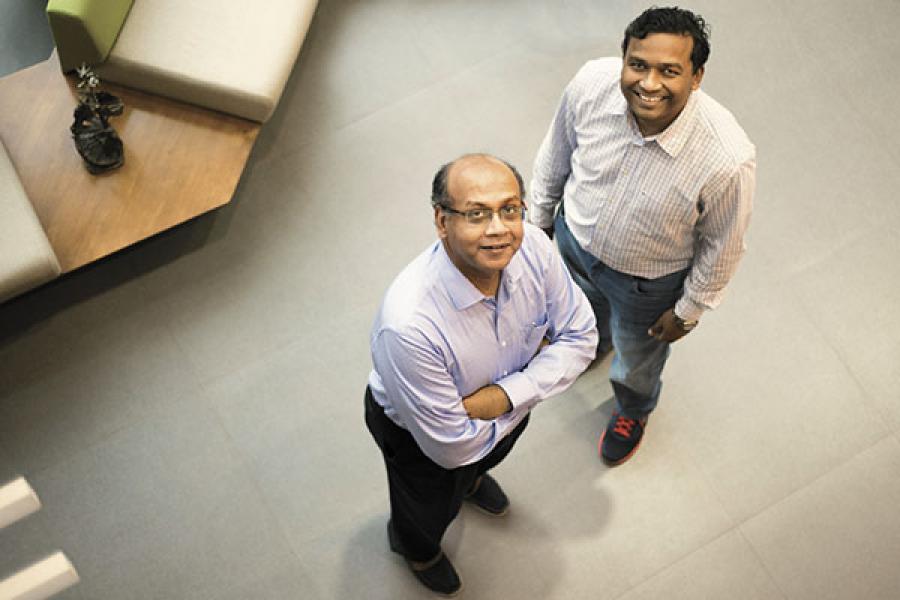 In 2008, Silicon Valley-headquartered Accel Partners took over the then two-year-old Bengaluru-based Erasmic Venture Fund that had a corpus of $10 million. Since the merger, Accel Partners in India has raised three funds, the latest being the $305-million Accel India IV fund launched early this year. After having funded around 100 entrepreneurial ventures in India—including Flipkart, Myntra and Ola—partners at Accel say there is no clear-cut formula to choose a winning startup.

Forbes India caught up with Subrata Mitra, a partner at Accel Partners in India and one of the founders of the erstwhile Erasmic Venture Fund, and his fellow partner Shekar Kirani who joined in 2011 and is currently spearheading investments in enterprise startups like FreshDesk.

Q. How has the journey been since Accel took over?
Mitra: It has been the best of both worlds. We were doing a good job at Erasmic, but we were the small fish in a small pond. We could see then that the market would start growing. We had two choices: Either we fight hard and grow quickly or join hands with some big player to make our journey a little easier or faster. At that time [2008] we were a little confused as we had three suitors. We did our little ‘Google search’ and like price discovery we did a portfolio discovery and we said, ‘These guys [Accel] look good’. We were in fact surprised that they had come calling.

Why I say best of both worlds is because we have the authority to do whatever we want as far as our Indian investments are concerned. Our fund is independent of our parent company, i.e. our US parent does not make investments from our pool of capital. All the partners in India are collectively responsible for the Indian fund. All we have to do is be part of the family and some of our profits go to the US parent.

Q. Early this year, you announced a $305-million Accel India IV fund. How many investments have been made from this fund and when will you deploy all the capital?
Kirani: Typically, our fund cycle is three years. We have already done around 30 investments from the Accel India IV fund, some of which are yet to be announced. The spread has been between $500,000 and $6 million for a single cheque. The fund size and number of investments are not as important as the opportunities and categories we want to back.

Q. On what companies are you placing your bets now?
Mitra: Let’s go back 10 years, to when we started Erasmic. We invested in companies that used a SaaS (software-as-a-service) type of model and hired a lot of smart people—who are harder to find in the US—to get work from there [the US] done in India. A classic example was the analytics company Mu Sigma. At that time, we invested in telecom companies like Kirusa, internet firms like Flipkart and Myntra and also content companies like HolidayIQ. We also saw opportunities in the technology-led healthcare space. Now, with our fourth fund we are looking at mobile-only, consumption-based companies. Mobile is not only a consumer story, it is also an enterprise story.

The other new thing that we are starting to look at is last-mile delivery—a space where we have made two to three investments. For example, we are looking at mobile technology to bring in efficiencies in the long-haul trucking business. A trucker coming from North India to Bengaluru does not know where to get his next business. But, through mobile technology the driver can log onto a network and find out where to get his next customer.

Q. How do you cherry-pick the right companies to back?
Mitra: If such a formula existed, people way smarter than us would have figured it out already. There is no such formula and each of us [the partners] do it differently. I always check on the founder and the team [of the startup] and if there is someone in my LinkedIn network who knows them. I do a background check. Then there are two questions I try to answer: If we are wickedly successful, is the founder going to lose his head and if we are really going to fail is he going to give up? Then I start looking for product market fit, technology and sales know-how, the size of the team and if there will be too many opinions in the case of multiple founders.

Q. Accel is best known for backing Facebook during its early days. Do you think you can script a similar success story in India?
Mitra: When we cash out of Flipkart, our second fund, through which we have invested in Flipkart and Myntra, may turn out to be one of the best performing funds.

[Accel’s $12.5-million investment in Facebook has already seen a return of over $6 billion.]

Kirani: Getting in early on a big-outcome company always returns better multiples.

Q. Is this the new normal in India: A technology-led internet retailer, which is less than a decade old, commanding a valuation of $15 billion (read Flipkart)?
Mitra: It’s definitely not the normal. I’m not sure when we will see five other companies hit $15-billion valuation. There is something unique about this opportunity and it is very different from what we have seen in the past.

Kirani: For technology-led companies, the time required to build a brand is much smaller compared to brick-and-mortar companies.

Q. Is there a valuation bubble in the ecommerce space and if so, is it going to burst anytime soon?
Mitra: It’s very hard to say because valuations of private companies are nebulous. It is a ‘beauty is in the eye of the beholder’ kind of scenario. In a public market you have lots more people scrutinising the data and we are able to say here is the parallel and here is why the valuation should be more or less. Even public company valuations switch fairly quickly at times.

Six months ago, there were more people wanting to put money, so there was a little bit of oversupply in capital, which has now started to reverse. The number of $10-million cheques signed in January this year was different from that in June or September, prompting some people to say money is drying up.

Kirani: If you look at the overall macro picture where, as private investors, we are taking bets over a seven- to 10-year period, I don’t think anything has changed. The opportunities are still there, the only difference is the supply of money.

Q. What do you make of the valuation growth of ecommerce and startup companies in India over the last few years?
Mitra: If you look back at 2012 and 2013, external money was much harder to come by. Then, all of a sudden, in 2014 something happened and the tap opened. All the growth that the companies were seeing in 2012 and 2013 got priced in, so to speak, in 2014 and 2015. When a pricing-in happens, everybody thinks they are going to miss the bus and starts investing. That may cause a spike in valuations in a particular year. However, the companies were building up to it in the previous two to three years. Last year, a lot of new money started coming in. There was this whole ‘China Capital’ which started to look at India and SoftBank did a bunch of investments.

Q. Can you describe the Indian ecommerce industry in three words?
Mitra: Tremendous potential and opportunity.

Tweets by @forbesindia
The next possible unicorns from India
Will an app-only strategy click in India?