The party leads in all seven constituencies ahead of Congress veterans like Ajay Maken and Sheila Dikshit, and high-profile AAP candidate Atishi 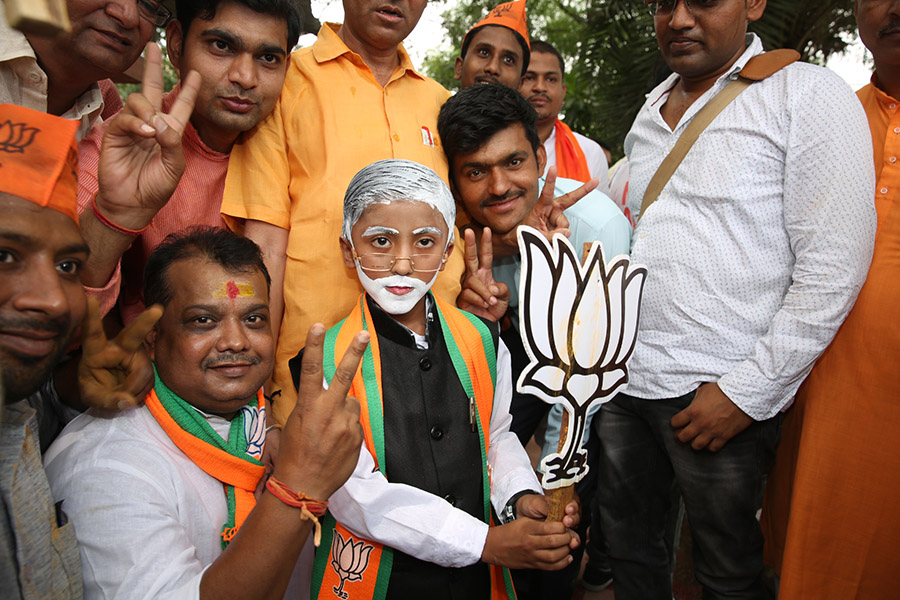 This young, made up 'Narendrabhai' from Vadodara even mimics the PM's speech and speaks to the television cameras as if he were Modi himself outside the BJP quarters in Delhi
Image: Madhu Kapparath

It's jubilation all around at the BJP’s swanky new headquarters at Deen Dayal Upadhyay Marg in New Delhi.

Children dressed as Narendra Modi, and older men and women wrapped in saffron flags are celebrating and dancing outside the party’s office. Many of them have come from outside Delhi, from cities like Jaipur and Meerut, despite temperatures hovering around 40 degrees in the capital. Hundreds of party workers, too, are beating drums to mark PM Narendra Modi’s resounding victory.

Inside the 1.70 lakh square feet office, the party had already organised a lavish lunch. The BJP-led National Democratic Alliance (NDA) is on course to win 342 seats of the 543 seats in the country. While most exit polls had predicted a win for Modi with 300-odd seats, the landslide margin seems to have shocked both BJP and opposition supporters alike.

“This is the breath of our Indian civilisation,” says Ajay Goswami, a Meerut resident who just about spoke a sentence in the middle of blowing a conch.

Says another party worker, “This is a mandate for development and Narendra Modi.” 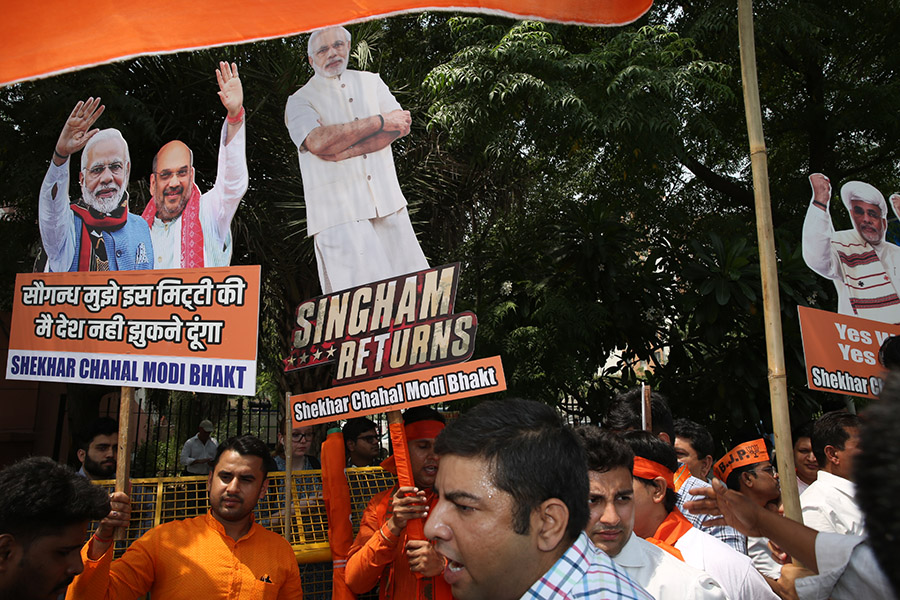 Barely 750 metres across the BJP office are the headquarters of the Aam Aadmi Party (AAP) wearing a deserted. AAP had fielded a candidate in all the seven seats, but is trailing in all seven.  The party had begun seat-sharing talks ahead of the elections but they fell through eventually.

The story was pretty similar at Akbar Road, the headquarters of the Congress, too, which had set up food stalls and arranged for celebrations in anticipation of a win. As of 2 pm, the party is leading in 53 seats, nine more than what it won in the 2014 elections. In New Delhi, the party’s most visible faces—Sheila Dikshit and Ajay Maken, and boxer Vijender Singh—are trailing.

“The BJP is leading because they managed to tamper with the voting machines,” says Bhavna Sehgal, a party worker stationed outside the Congress headquarters said. The opposition parties, for weeks, have claimed that the electronic voting machines could be and are being tampered.

Nevertheless, there’s no denying that a Modi wave has been sweeping the country and in New Delhi, once again, the opposition is feeling the heat in more ways than one.