Hitting Sales for a Six

Although the sales of team merchandise is a listed source of revenue, none of the teams reveal how much they make from it 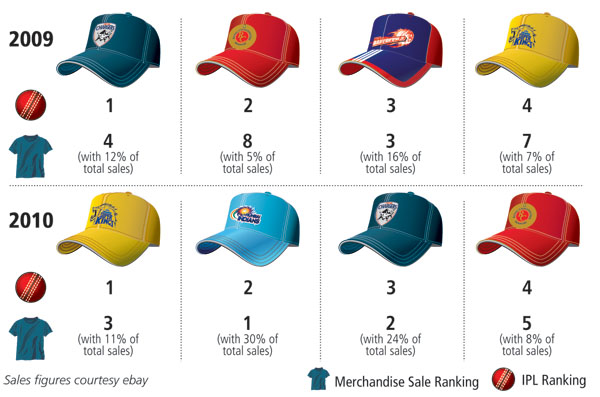 Infographic: Sachin Dagwale
The Indian Premier League has gotten bigger and pricier each season, with two more teams in the fray in IPL 4 and more advertising money pouring in. Although the sales of team merchandise is a listed source of revenue, none of the teams reveal how much they make from

We did some snooping around to see if a team's success has a bearing on their merchandise sales. Going by the first three seasons, it seems fans are warming up to the concept of supporting their team by buying merchandise.

In 2009, there was a disconnect between sales figures and on-field performance. Runners-up Royal Challengers Bangalore saw the lowest merchandise sales. That the tournament was hosted in South Africa may have hit sales in India. Things were better in 2010: The top three ranking teams recorded the top three highest sale of merchandise. However, Kolkata Knight Riders seem to be an aberration by finishing last but one on the rankings but in fourth place with their merchandise sales.

Of the KKR jerseys, Sourav Ganguly’s was the highest selling. Let us see if KKR fans buy any merchandise with him not on the team now. This season may see some interesting figures, following the reshuffle within the teams.