Lakpa Sherpa has climbed Everest seven times. But he says this year's season was the most challenging of his career 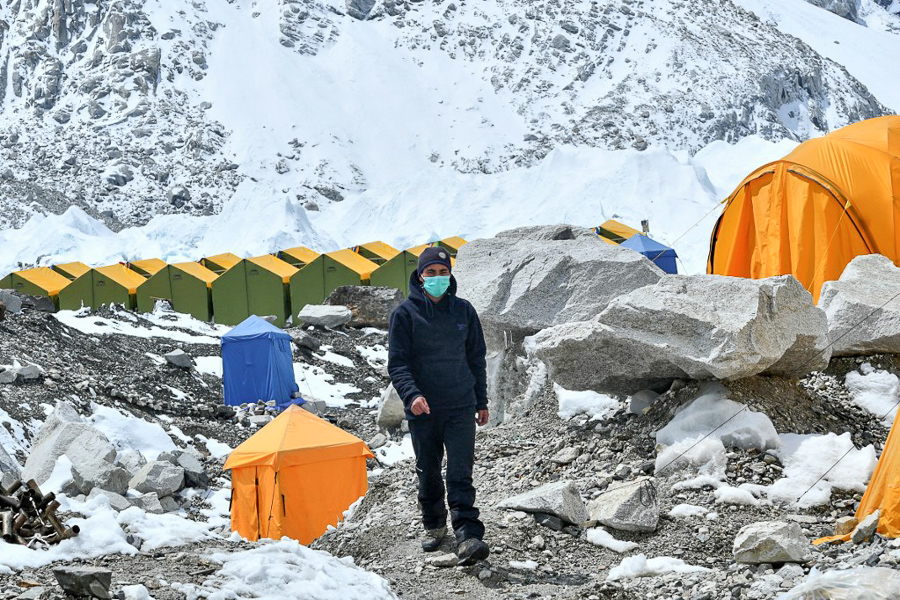 The pandemic forced a complete shutdown of Nepal's mountaineering industry in 2020, dealing a harsh blow to the tiny Himalayan country's tourism-dependent economy.

Then this spring, the allure of the highest peak in the world brought climbers rushing back.

Even as China's side of the mountain remained closed, Nepal issued a record 408 permits to ascend Everest, worth about $4.2 million.

Quarantine restrictions were eased to promote the climbing rebound, but there were also no clear plans to test for, isolate or control an outbreak.

While summiting the mountain was already deadly, it had become even more dangerous.

Just weeks after the peak reopened, a Norwegian climber, Erlend Ness, confirmed that he fell sick at base camp and then tested positive in Kathmandu after he was evacuated. Other cases followed.

Still, Sherpa decided he had to persevere with the expeditions his Pioneer Adventure had booked for 23 clients.

"This season was very difficult. We were already working under pressure because of Covid, and then the weather also betrayed us," he told AFP.

The warmer window that usually ushers in safer conditions for scaling Everest and other Himalayan peaks coincided with a deadly second wave of virus infections in Nepal, with reports of more than 9,000 daily cases in May.

"There used to be coughs, common colds and a risk of getting into avalanches and crevasses in the past. But this year, the danger was if we got infected from Covid we would not be able to climb up because it makes breathing difficult and causes fatigue," said guide Mingma Dorji Sherpa.

'Very sick'
Despite precautions that teams tried to take -- including masking, sanitising and isolating -- virus cases began to spread.

Pilots in PPE suits arrived to evacuate dozens of suspected Covid-19 patients out of the area and at least two companies cancelled expeditions after team members tested positive.

Many climbers confirmed their diagnosis on social media and blogs, including some who had reached the summit.

When Icelandic duo Sigurdur Sveinsson and Heimir Hallgrimsson began coughing as they reached around 7,000 metres, they suspected they had caught the virus. Still, they made it to the summit 8,849 metres above sea level.

Their symptoms became stronger as they descended.

"In camp 2, we were both very sick from coughing, headaches and other fatigue. We suspected that not everything was perfect and we needed to get down as fast as possible," they said in a statement last Thursday.

They said they both tested positive on reaching the base camp, and isolated in their tents.

Yet authorities in Nepal have not acknowledged a single case at the mountain, with the stakes high after last year's shutdown cost one of Asia's poorest countries millions in lost revenue. Porters and guides for well-heeled foreign climbers were left without income.

It was the third time in the last decade that Everest's summit sat empty. Climbers abandoned the mountain after the 2015 earthquake triggered an avalanche killing 18 people.

In 2014, an avalanche claimed the lives of 16 Nepali guides on the infamous Khumbu icefall, forcing organisers to cancel expeditions.

Lukas Furtenbach, who was the first to call off his expedition because of Covid-19 outbreaks, says the government should extend the validity of the $11,000 licence his clients purchased to climb Everest.

"Nepal invited foreign expeditions to come and assured us of Covid safety... And my clients did not feel safe at the base camp," he said.

Expedition organisers have also self-censored, leaving no way to estimate the actual number of cases among Everest climbers and guides.

"There is no excuse for the blatant lies, denials, and cover-ups committed by the (government) this season," mountaineering blogger Alan Arnette wrote on Friday.

"Do they understand that their actions only undermine the very credibility they need to effectively manage their resources?"

'Will be coming back'
Those willing to risk coronavirus infections faced a curtailed window to climb. The government put limits on the number of climbers who could scale at any given time to avoid a traffic jam on the peak, and two cyclones that hit India in May further restricted the three-month season.

When the second of those cyclones hit eastern India last week, it caused a huge snowstorm on Everest, burying the tents of the last lot of climbers waiting to summit.

Final numbers are yet to be announced, but the tourism department estimates that around 400 climbers reached the summit this year, far less than the 644 in 2019 when fewer permits were issued.

German climber Billi Bierling, who manages a database that records summits, said that the events of this year are unlikely to dim interest in Everest.

"Maybe we will think about it and reflect on what happened in 2021, but once this is over, expedition operators and climbers will be coming back."

Tweets by @forbesindia
$28 million: That's how much a seat to space with Jeff Bezos costs
Doing good while doing well: The case of business IT initiatives