By joining hands with industry leaders and the top rung of sportspersons, Odisha is laying the foundation for top performers 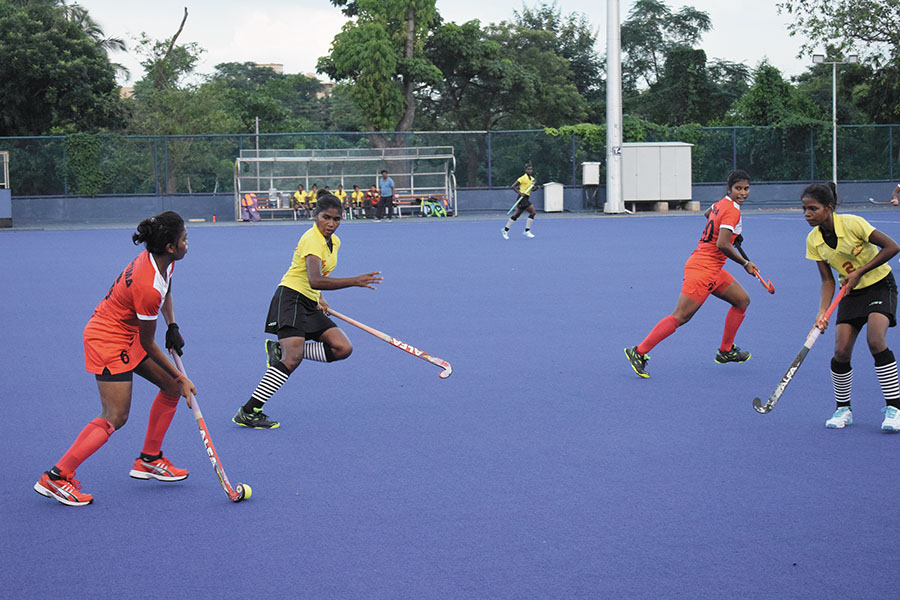 The Naval Tata Hockey Academy was inaugurated this August

To promote sporting talent in the state, the Odisha government is in the process of setting up 10 High Performance Centres (HPC) for sports training, which Chief Minister Naveen Patnaik announced in November last year. What makes these centres unique is the fact that the government has signed memorandums of understanding (MoUs) with eminent sportspersons and industrialists to set them up, with the end goal of promoting sports and producing world-class players.

The athletics HPC will be set up in partnership with Reliance Foundation; football and swimming with the JSW Group and All India Football Federation; badminton with the Dalmia Bharat Group and India’s chief national badminton coach Pullela Gopichand; weightlifting with the Ahluwalia Group and former cricketer Anil Kumble’s sports management firm Tenvic Sports; shooting with the Aditya Birla Group and Gagan Narang Sports Promotion Foundation; a sports science centre with Olympian shooter Abhinav Bindra and Rungta Mines; and hockey with Tata Steel and Tata Trusts. While explaining the collaborations, Vishal K Dev, secretary sports, Government of Odisha, says, “The government wanted to establish the best sports facilities for nurturing the next generation of medal winners and sports achievers for the state and the country. We were sure from the beginning that we want to do it in the right manner and not delay things. And with that view, the best set of experts from the sports fraternity were roped in as part of these MoUs to operate the HPCs.” Under the various training programmes, athletes will be accommodated at state-run hostels, primarily at the Kalinga Stadium in Bhubaneshwar, but also in Cuttack, Puri, Sundargarh, Rourkela, Balangir and Dhenkanal. Athletes under other state-sponsored schemes (such as the U-16 Indian Arrows football team) will also train for free at these centres. R Vineel Krishna, director, Odisha Sports, says: “The corporates were able to put their weight behind our endeavour as part of their CSR spending and commitment to develop sports. This paved the way for good partnerships for setting up of the HPCs.” For example, he adds, the weightlifting HPC already has 12 girls and nine boys training under Iranian-British coach Kazem Punjavi. “The state set up a weightlifting HPC because Odisha has been performing well in weightlifting, and we have good potential to create medal-winning international lifters.” 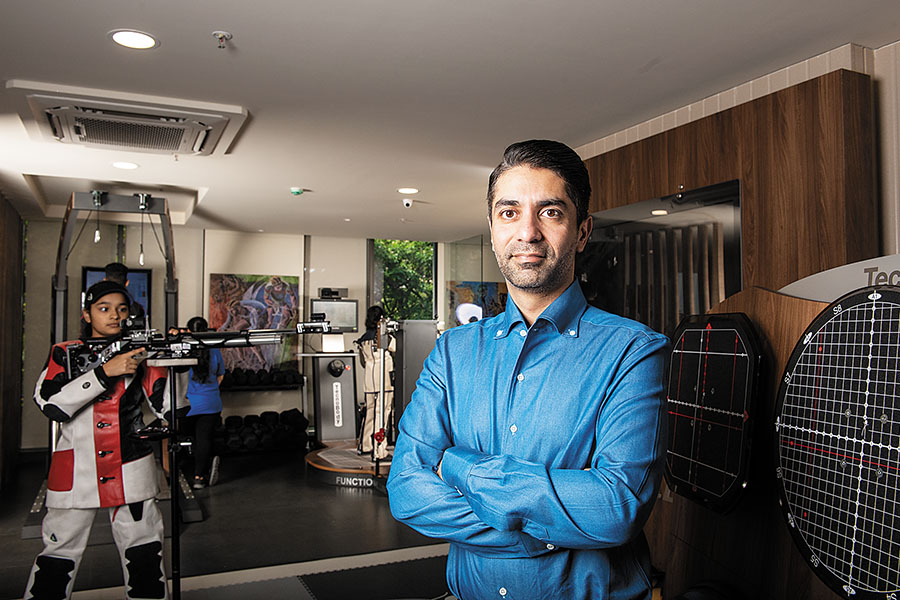 Another example of an HPC in India is the Inspire Institute of Sport in Vijaynagar, Karnataka. The facility is privately funded by the JSW Group. The Abhinav Bindra Targeting Performance (ABTP) centre at Bhubaneshwar’s Kalinga Stadium started functioning in February 2019, and so far has had the Indian hockey team, Indian U-16 football team, and the Indian rugby team utilising the facilities. The centre aims to train athletes for Olympic and Paralympic sports in the field of performance, injury management, recovery and rehabilitation with the use of cutting-edge sports science methods. Of the five ABTP centres at Pune, New Delhi, Mohali, Bengaluru and Bhubaneswar, the one in Bhubaneswar boasts the latest technology when compared to any other similar sports science centre in the country. “The ABTP centre brings global best practices, in the form of sports science and technology, to athletes,” says Bindra, founder of ABTP, and the only Indian to win an Olympic individual gold. “Our seamless methods provide our athletes with a unique assessment-training-assessment process, where an athlete would not only feel the results, but also have the precise data that tracks improvements throughout the training period. Using real-time bio-feedback on our systems, we can correct counter-productive tendencies, and promote safer, efficient, and stronger movement of the entire body. Our systems can also be used with sport-specific equipment, creating ideal conditions for an athlete to train in.” The Naval Tata Hockey Academy (NTHA) is another one of the HPCs, inaugurated this August, as part of the MoU between the state government and Tata Trusts. Located at the Kalinga Stadium, it aims to be the apex hockey training academy not just in Odisha, but also in India. Though preference would be given to the best hockey talent in the state, the best players from across the country will also be groomed into future national and international players. 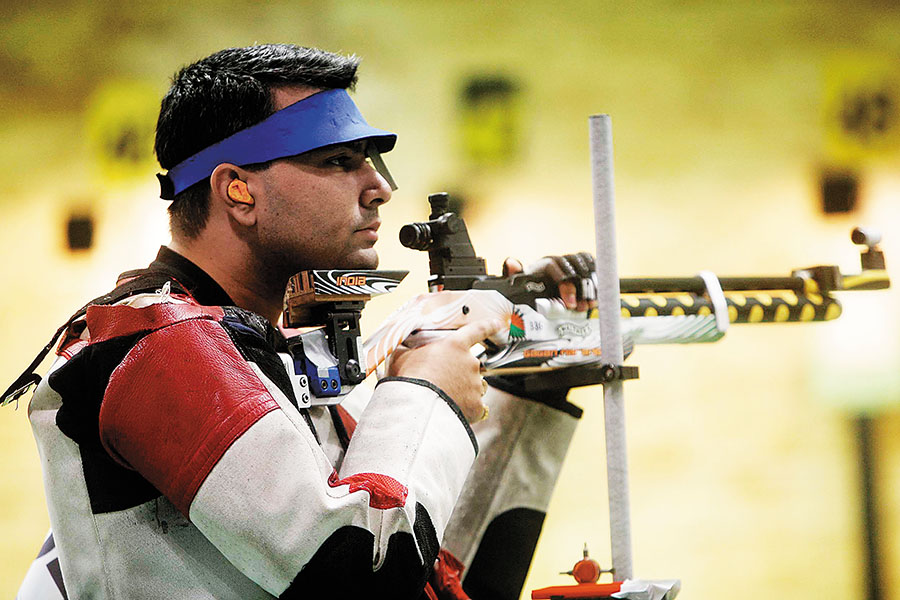 Olympian Gagan Narang’s foundation Gun for Glory, in collaboration with the Aditya Birla Group and the Odisha government, will set up an HPC that will have India’s biggest 10-m shooting range
Image: Kaushik Roy / The India Today Group via Getty Images

Furthermore, in December NTHA will be starting its grass-roots programmes in Sambhalpur and Sundargarh districts, which have a rich hockey culture and a history of producing talented hockey players, such as Dilip Tirkey, Ignace Tirkey, and Roshan Minz among others. Young players from the communities in these regions will be trained and provided with career opportunities as trainers and coordinators at these centres. The Netherlands-based Bovelander Hockey Academy will provide technical assistance in conducting the training of coaches at the hockey sports hostels in Rourkela and Sundergarh, and also facilitate structured coaching through manuals. According to Rajeev Seth, project director of NTHA, “Odisha is already known globally as the ‘cradle of hockey’. In addition to the training, players will be supported in the completion of their education, and will be skilled for career opportunities in sports, thus ensuring a holistic development. Access to the ABTP centre will provide the best sports medicine support to improve the performance of the players.” Seth added that the vision is to provide best-in-class training on artificial turf from an early age to enable players to compete at par with their international counterparts. “We are further focussed on the development of high performance hockey coaches, and aim to increase the number of Odisha players in the national team representing India at international events.” The Odisha government has approved the design of the HPC for badminton, for which Dalmia Cements Bharat Limited has committed its CSR funds, and will be supporting the Pullela Gopichand Badminton Foundation (PGBF) in setting it up. According to Gopichand, Rajiv Gandhi Khel Ratna awardee and founder of PBGF, the centre will be one of the most modern facilities in the country where they hope to produce world-class champions, as well as showcase the centre’s architectural beauty and infrastructure. The academy is expected to be functional by next year. Olympic bronze medallist Gagan Narang’s foundation Gun for Glory, in collaboration with the Aditya Birla Group and the Odisha government, will set up an HPC that will have India’s biggest 10-m shooting range, with 100 lanes, along with 80 lanes each for 50-m and 25-m shooting. At present, the Dr Karni Singh Shooting Range in Delhi has the biggest 10-m range, with 80 lanes. Gun for Glory has also launched the Odisha Talent Adoption Programme for students in Bhubaneswar. “This programme will be run with the objective of spotting children between the ages of 11 and 15, who are naturally adaptable for the sport of shooting,” says Narang. “It will be conducted initially in the city of Bhubaneswar, and, in the first phase, will cover more than 4,000 students from various schools. Our idea is to create a strong pedigree of shooters. The selected students will undergo various tests which will screen them for their reaction time, balance and kinaesthetic awareness and their physiological and stress endurance levels.”

Tweets by @forbes_india
Inside China's push to turn Muslim minorities into an army of workers
Will credit growth pick up as NPA decline?