Travel: A slice of France with Moët & Chandon 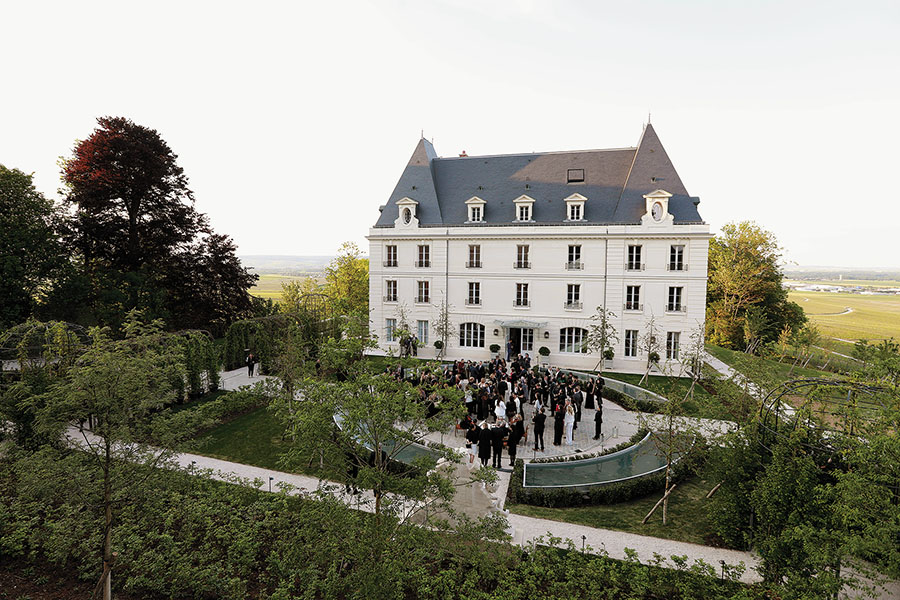 It is early evening, the last day of harvest in the vineyards. As we go up a row of vines, picking grapes that are at the perfect ripeness for the champagne that Moët & Chandon plans to use them for, someone yells out, “Panier!” One of the two people assigned to be basket carriers comes over to pick up the basket full of grapes and replaces it with an empty one so that the grape picker can continue. It’s the exact procedure followed during harvest except that in our case it is rounded off with a glass of champagne that is sitting ready on ice.

Expectedly, champagne flows freely when you are a guest at the Chateau de Saran located near Epernay, in the Champagne region of France. Moët & Chandon is one of the biggest champagne houses in the world—reportedly one bottle of Moët & Chandon champagne is opened every second around the globe and its old cellars in Epernay, 28 km of them spread over several levels, are testament to the number of bottles of champagne the House makes. Each batch is marked in a special code by the wine makers, all the bottles housed and aged in cave-like niches in the cellars where time stands still, where the conditions, light and temperature have been the same—at 10-12°C—since 1743.

At the chateau, the heart of the Moët & Chandon empire, time stands still in other ways. Situated at the end of a long, winding driveway and surrounded by woods and almost an acre of Chardonnay vines, the château stands on lands originally acquired in 1801 where Jean-Remy Moët, grandson of the House’s founder, built a hunting lodge that later became the family residence. Now, after a five-year renovation, in time for the brand’s 150th anniversary celebrations of the Maison’s signature brut champagne Moët Imperial, the château has been redone for the 21st century, while continuing to evoke its 200-year-old history and heritage.

“I wanted to capture the spirit of Saran in the lounges, dining rooms and living rooms of the château, by evoking the daily life of the great families of Champagne in the 19th and 20th centuries,” says Yves de Marseille, art historian and specialist in set design for historical films, who worked on the chateau’s interiors. 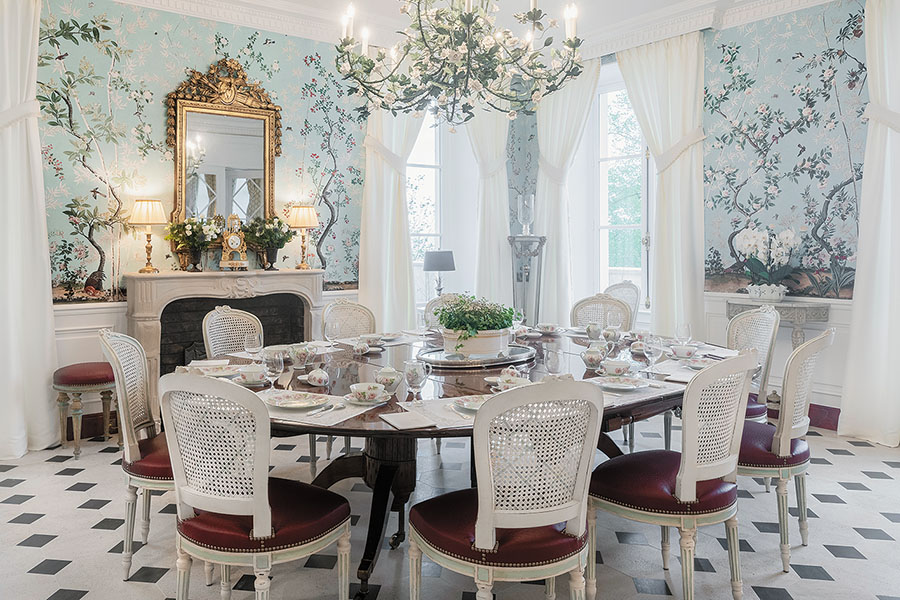 The breakfast room at the Chateau de Saran has a homely vibe
Image: Courtesy Moët & Chandon

While the 11 rooms spread over three floors pay homage to the people, centuries and countries that have been a part of the success of Moët & Chandon, the lounges and dining rooms bring alive an era of luxury and the house’s ‘art de la fete’, or the art of celebration. In the living room for instance, a Versailles-style parquet and ochre-toned rugs come together with family portraits and a baby piano, a family heirloom, making it a luxurious yet homely room, and the heart of the chateau.

“This château is a journey through Moët & Chandon’s history, the opportunity to our guests to discover the fantastic Maison épopée,” says Stephane Baschiera, CEO, Moët & Chandon. As in a private home, each suite is designed in a different style “paying tribute to a dazzling epoch, a conquered territory or the spirit of a brilliant personality, each having marked the memoire of the Maison”, he adds. The ‘Impériale Suite’, for instance, he adds, is an ode to Napoleon I, staged in homage to the patronage of France’s imperial family that gave its title to Moët Impérial, the champagne born on the centennial of Napoleon I’s birth. While, the ‘Chinese Suite’ pays tribute to the vast country that first welcomed Moët & Chandon in 1843.  The ‘Roaring Twenties Suite’ echoes the vibrancy of a jazzy Paris, an age of festive celebration, he adds. As an aside, the first bottle of Moët & Chandon reaching Indian shores was way back in 1839 in Kolkata.

Over the past half a century, the chateau has played host to princes and princesses, the British Queen, ambassadors, ministers and a number of personalities from the world of cinema, style and tennis, as well as clients. And when it opened its doors earlier this year, it hosted the who’s who of the world, including Roger Federer, actors Kate Moss and Uma Thurman among others, all of whom were brought in by the Orient Express to dine at the table of LVMH Moët Hennessey CEO and Chairman Bernard Arnault, the richest man in France. 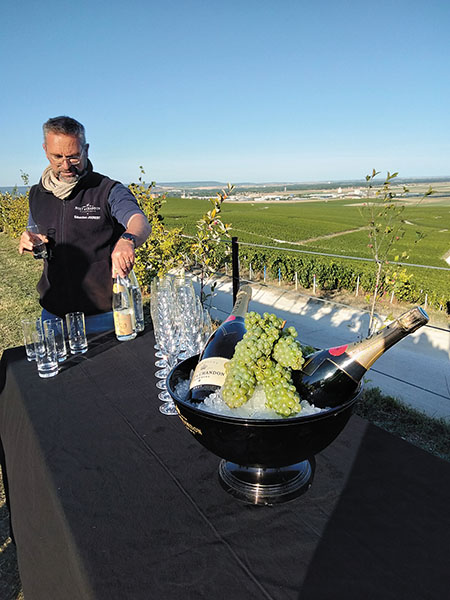 The chateau is surrounded by an acre of Chardonnay vines
Image: Monica Bhatija
On this day, at the candle-lit dinner table, under a chandelier shaped like a vine, chef Marco Fadiga is explaining how to make the most of the sauteed duck liver, lime froth and cucumber paired with the Moët & Chandon Imperial champagne. “Try it without the cucumber and then with the cucumber, it brings out the freshness of the champagne,” he says before walking back to the kitchen to send out the next course that includes spring pea ravioli and a mimolette cheese ice-cream, both paired with a Moët & Chandon Rose Imperial.

Breakfast the next morning, in a brightly-lit room around a huge mahogany table laid out with fine porcelain and silver cutlery, is also a reminder that this is a private residence and not a hotel, the chateau aiming to provide the ultimate in luxury—an experience that no amount of money can buy you.

“Luxury is becoming more and more about experiences, and Moët & Chandon has always been all about crafting experiences,” says Baschiera, adding that Moët & Chandon has always been at the forefront of the ‘money can’t buy experiences’. “For example, since 1992 when we first partnered with the Golden Globes, we offered to our most important clients and friends of the House the exclusive possibility to join us at the Globes walking the red carpet among Hollywood’s stars, and attending one of the most important award ceremonies in the world of cinema. True money can’t buy experience!”

The chateau is the latest in the line. You have to be friends or family of the House to be invited to come and stay. “The Château de Saran is a family residence, not a hotel, so you cannot pay to come and stay at Saran,” says Baschiera.

(The writer travelled to Epernay, France, at the invitation of Moët & Chandon)