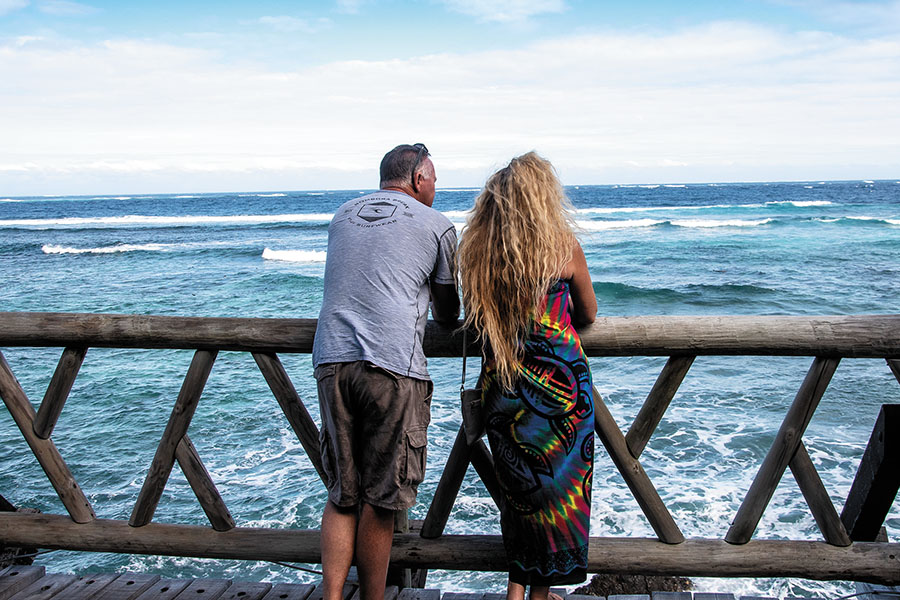 The Matamanoa Island Resort is a one-island getaway among the Mamanuca Islands
Images: Gustasp & Jeroo Irani

Want to stage an elopement, tie the knot in an old-world chapel, celebrate a beach wedding or have a champagne breakfast in bed? Perhaps savour a candlelit dinner on an uninhabited island or sand bar where white surf frills up to an unblemished beach? The Republic of Fiji has ‘Adults Only’ resorts that woo couples and amp up the romance quotient with these blandishments.

The country is an archipelago of 333 islands strewn in the South Pacific Ocean, of which only a little over a third are inhabited, with a population of 884,887. According to the Fiji Bureau of Statistics, the volume of tourists who visit the country is almost as large as its own population. It received 870,309 tourists in 2018, with the tourism industry generating a revenue of about $917.51 million.

“India is one of the key emerging markets for Tourism Fiji,” says Kathy Koyamaibole, regional manager Asia, Tourism Fiji. “We have seen a stable growth of 15 percent year-on-year in Indian arrivals. In 2018, we had 5,901 tourists from India, a 14 percent increase compared to the previous year. We aim to further the initiatives we are carrying out in the Indian market to continue the double-digit growth.” The initiatives include efforts to raise awareness about this idyllic nation where romance flows like a languorous river. 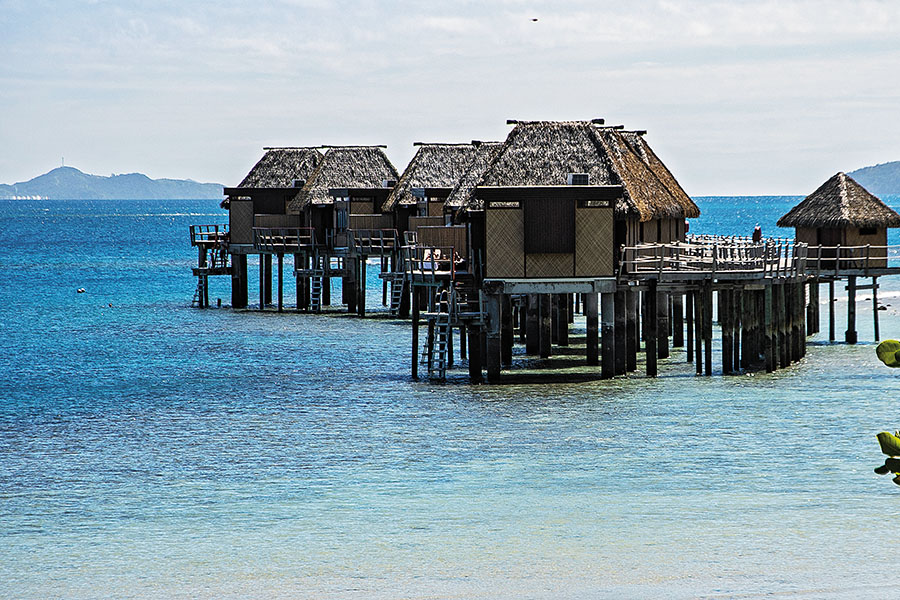 Over-water bures give a feeling of being adrift

The boutique luxury havens in Fiji take playing Cupid very seriously, much like their counterparts elsewhere in the world, from resorts in Big Sur and Napa Valley in California, to Costa Rica and Bali, where the focus is on child-detox and digital-detox. Across the world, Adults Only resorts tend to be secreted away in off-trail locales such as in vineyards, atop cliffs, in stately mansions and on private islands and offer the luxury of solitude and space to travelling love birds or harried parents in need of a break.

There is a ‘Garden of Eden’ quality about the Fijian islands and the Adults Only resorts have harnessed and enhanced this feel with a ‘child-free’ ambience (most resorts allow teens aged 16 and above, while others allow teens aged 18 and above). Throw in richly appointed villas ensconced in lush foliage, private plunge pools, outdoor showers and thatched pavilions with day beds, and you have a sure-shot recipe for romance. 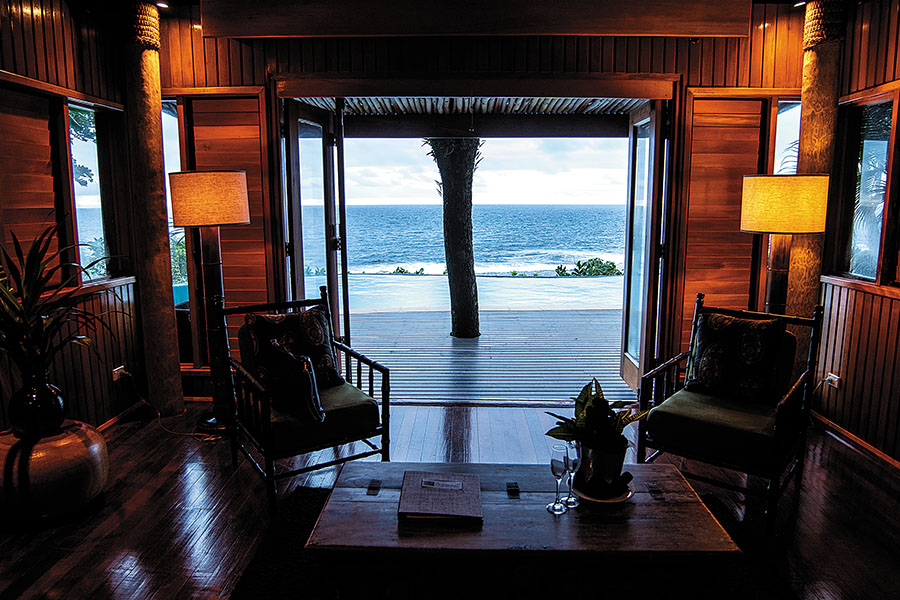 The Namale Resort is a rainforest and oceanfront retreat

“Tokoriki Island Resort was the first Adults Only resort in the Mamanuca Islands,” says Patrice Belle, director of sales and marketing, Tokoriki Island Resort. The Mamanuca Islands are a group of isles that lie west of Nadi, Fiji’s international gateway located on the main island of Viti Levu. Indeed, Tokoriki started life as a family resort and switched to the Adults Only model in 2005 to cater to the niche couples’ market, “which was by then a global trend”.

The initiative seems to have yielded results. “For five consecutive years we have been voted as the most romantic resort in Fiji by TripAdvisor travellers,” claims Belle. The 36 beachfront villas and bures (indigenous thatched dwellings) are wrapped in the tranquillity that lovers seek, and snuggle amid tropical vegetation. 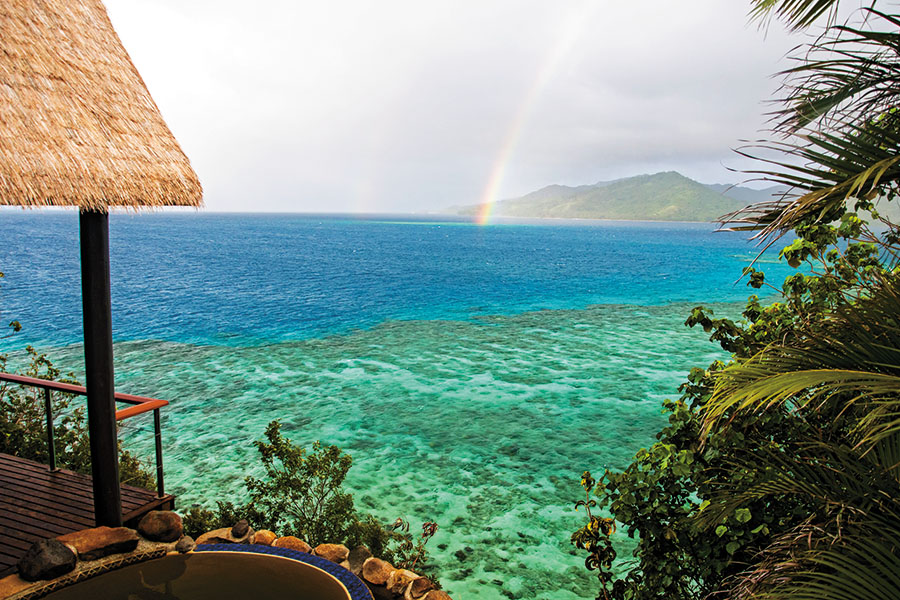 Tokoriki even has an in-house ‘Romance Co-ordinator’ who handles special requests. These could include enchanting dining options, ideal settings to pop ‘the question’, ‘elopements’ (essentially an intimate wedding ceremony for just the bride and groom), beach weddings or an atmospheric one at their historic stone chapel with a village priest officiating. There are multi-course dinners with French champagne, the services of personal butlers, and musicians to serenade. “Honeymooners do not like to be surrounded by children, while older couples prefer a tranquil, child-free environment,” explains Belle.

Likuliku Lagoon Resort Fiji is located on the Malolo Island in the Mamanuca group of islands and was the first retreat in Fiji to have bures cantilevered over a turquoise-blue lagoon. A separate bathing pavilion with lagoon views, private access to the beach, and the feeling of being adrift make these over-water bungalows an exclusive sanctuary. Spread over 77 acres, the uber luxe retreat also has beachfront and garden bures. 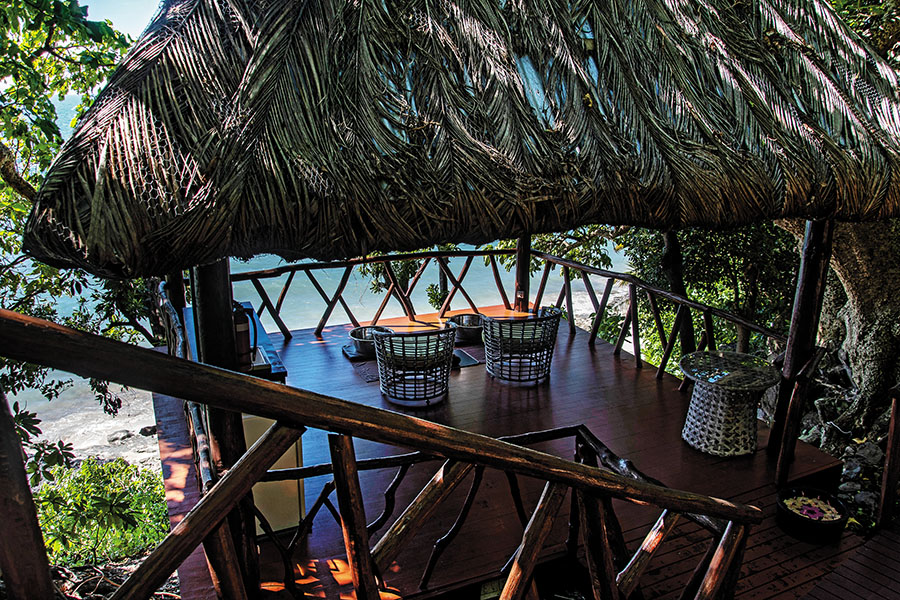 The Likuliku Lagoon Resort has over-water, beachfront and garden bures

You could choose to laze on your day bed, snorkel in the lagoon, jet ski to a private island or have a candlelit dinner for two on a private island, under the stars. Wrap up the day with a two-hour ritual at the spa, which includes soaking in a milk bath, or by dining at a private beach with the lagoon lapping at your feet.

“Likuliku is one of a handful of true luxury Adults Only resorts, and we sit in a much sought-after niche,” says Samantha Muspratt, director of sales and marketing of Ahura Resorts Fiji, the management company of the resort, which opened in 2007. “Over the past few years, we are seeing existing resorts doing renovations and additions to their product offering to include Adults Only areas; they have seen the demand and potential for it.” Likuliku was an Adults Only resort from the planning stage itself. “The benefits of the Adults Only concept are: Privacy, intimacy, serenity, relaxation, romance, and solitude,” adds Muspratt. 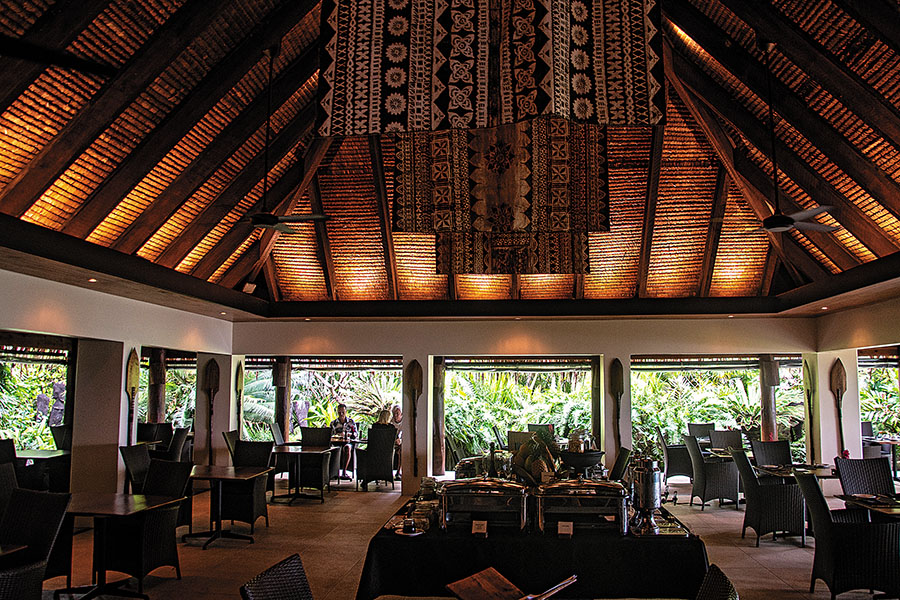 The Tokoriki Island Resort started life as a family resort

The lyrically named Matamanoa Island Resort is a one-island getaway among the Mamanuca Islands, with its small size making it an ideal Adults Only boutique luxury setting. Its biggest draw is the alluring hilltop spa where you may well feel that you are afloat amid the clouds. You could opt for a Sunrise Massage at the crack of dawn on the spa’s topmost level, or the Sunset Massage on the level below when the last rays of the sun streak the sky, or even the Under the Stars rub-down under a star-spangled sky.

For these resorts, being child-free is not enough; each strives to create a unique selling proposition, such as being nestled in a rainforest, or providing breathtaking oceanfront views, or creating a supreme sense of isolation. For instance, Namale Resort and Spa is a rainforest and oceanfront retreat on Fiji’s second largest island of Vanua Levu. “Namale has an almost wild topography with different outcrops and vantage points that afford some romantic dining opportunities,” says Bill Keefe, co-general manager. Among its experiences are lolling in a heart-shaped Jacuzzi, aptly called The Lovers’ Deck, which is hewn into a cliff overlooking the ocean, or having breakfast or lunch at the Blow Hole Deck, which looks out over the ocean spurting out of humped volcanic rock, like a giant fountain. The resort had started out 30 years ago as the family retreat, comprising four bures, of US-based author and motivational speaker Tony Robbins. It was expanded over time, and was eventually converted into an Adults Only resort. Hollywood actors Russell Crowe, Tom Selleck and Meg Ryan, and designer Donna Karan are some of its celebrity guests. 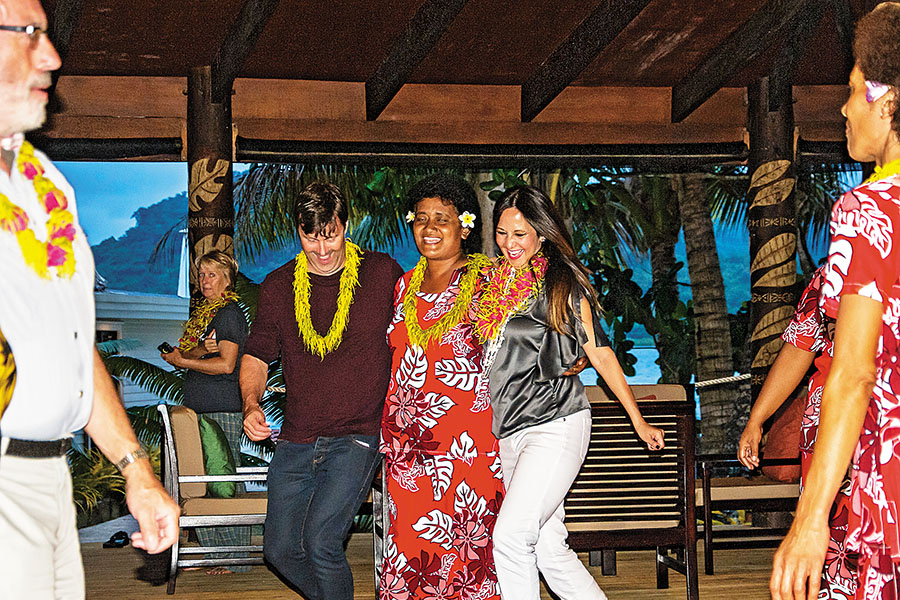 Each of the bures and villas at Namale are unique in design, and set amid a teeming jungle of flowering gardens. Couples can paddle board or kayak, snorkel or scuba dive, go horse riding on the beach, and hike to a waterfall for an open air breakfast; they dine from bespoke menus in a hushed forest or in a candlelit sea cave.

The Royal Davui Island Resort, perched on a rocky island in Beqa Lagoon off the main island of Viti Levu, embodies the free island spirit. The boutique luxury resort is sculpted into a hill that hangs over a lagoon and has 16 villas and bungalows, each with its own private, climate-controlled plunge pool and an outdoor deck with a swim-up bar from where you can gaze at the Beqa Lagoon. Some villas snare views of magical sunsets and others, of sunrises over the Pacific Ocean.

Like the Namale resort, the Matangi Private Island Resort too had origins that were very different from its current status. In 1878, it was bought by the great grandfather of current owners Flora Douglas, who now runs it with her husband Noel. “It was initially a coconut plantation,” says Douglas, until they took a leap of faith in 1986 and converted it into a private island resort. Located on 240 acres, the island is in the northern part of the Fijian archipelago.

The resort is set against the backdrop of a forest, while in front the ocean curls up invitingly. Couples can opt for split-level tree houses that have a castaway feel but come with frills like an outdoor lava rock shower and Jacuzzi, and a sun deck with sea views. They can go on picnics at Horsehoe Bay, on the western coast of the island. Listed in the book 1000 Places to See Before You Die by Patricia Schultz, the bay is private, with its own beach and a jade-green lagoon.

When it’s time to leave paradise, the staff of the resort, in Fijian tradition, gathers around, holding aloft garlands and then breaks into a melancholy Fijian love-cum-farewell song, ‘Isa Lei’. Their voices soar in the air as the speed boats of couples skim the waves and pull away.