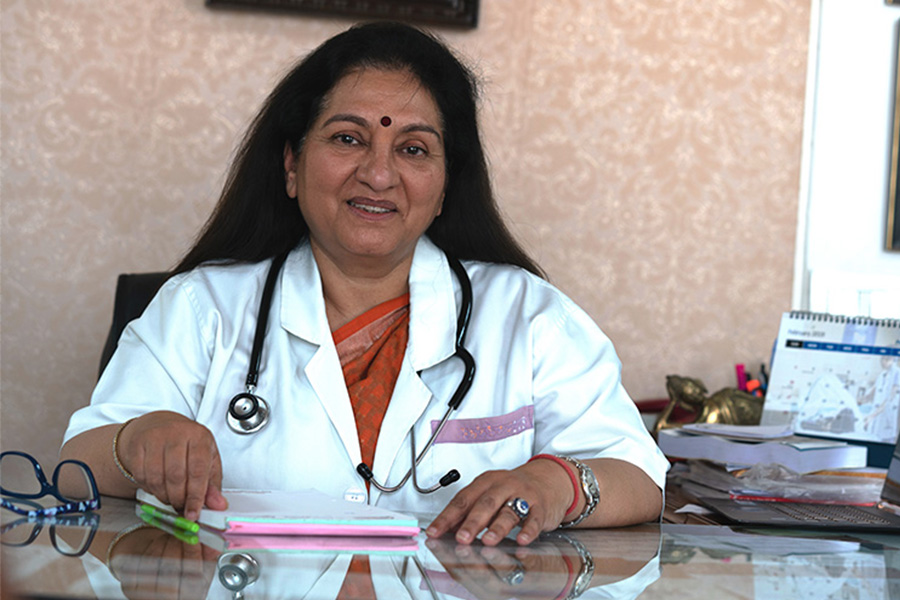 DR. JAIDEEP MALHOTRA
Director, Rainbow IVF
Years of experience: Over 30 years Dr Jaideep Malhotra is a pioneer in women healthcare. A dedicated obstetrician, a super specialist in infertility and an ace sonologist, Dr Malhotra is an eminent speaker in national and international arena. She is widely described as charismatic, courageous and compassionate. Her career is outlined with achievements and thought-provoking projects initiated for the betterment of women. She is one of the very few in the world to be conferred Honorary Fellowships of both Royal College of Obstetrics and Gynaecology of (UK) and Fellowship of Royal College of Physicians (Ireland). In January 2018, Dr Malhotra took over as president of FOGSI (Federation of Obstetrics and Gynaecological societies of India), which has 36,000 members in 250 societies. Coming from a legacy of obstetricians and gynaecologists, she is a third-generation icon. Her vast experience and extensive travel has helped her gain in-depth knowledge in understanding women's health issues. She has effectively initiated, created and restructured to remodel the women’s healthcare sector. She initiated imperative projects to help reduce non-communicable diseases in future generations. She has made a remarkable difference in the lives of thousands of couples battling with infertility across India, Nepal and Bangladesh. She has engineered the birth of over 9,000 IVF babies and 12,000 IUI babies in these three countries alone. Charting The Path
She is one of the most decorated woman of India, from being president of FOGSI, Indian Menopause Society and ASPIRE, she is currently the president of Indian Society of Assisted Reproduction and Indian Society of Prenatal Diagnosis and Therapy and South Asian Federation of Menopause societies. She has made valuable contributions to the goal setting of each of these organisations. Her productive contributions in developing the ASPIRE standards of minimum care statement and accreditation of ART centres in Asia Pacific, along with the development of fellowship courses, establishing Club 35 plus, project Adbhut Matrutva have all been applauded. She is an effective and active member of the FIGO Reproductive Medicine Committee and the FIGO Environmental Health Committee and took up the task of planting 1 lakh trees each year for the next five  years. She is also the chief editor of two journals for the SAFOG and the SAFOMS and is on the editorial board of ASPIRE and many other medically relevant journals. She has delivered over 2,500 lectures and 40 orations and published over 50 papers and 30 books; many of her publications have been translated into various languages worldwide. She takes her corporate and social responsibility seriously. Under her and Dr. Narendra Malhotra’s leadership, the NGO SMRITI is now on the threshold of adopting 1 lakh girls, by taking care of their educational and medical requirements. She is also engaged in educating the general population on pertinent health issues, through documentary films and through the FOGSI channel that she started on YouTube. She is also a coveted professor at the Ian Donald school of Ultrasound, Dubrovinik and Regional Director for South East Asia.  Life Lessons
• Nurture the Nurturers - If you want to revamp the health scenario of a country, focus on its women • Don’t only empower the girls, most importantly sensitise and educate the boys of our country.  Achievements
• First Indian president of Asia Pacific Initiative in Reproduction (ASPIRE).
• Recipient of Nepal Samman from the Prime Minister of Nepal for setting up of the first IVF unit of Nepal and producing first 300 IVF babies of Nepal.
• First Indian obstetrician to be conferred FRCPI & FRCOG.
• First Indian woman to head six organisations.
• Creator of Adbhut Matrutva App for holistic management of Pregnancies.
• Innovative ideas of club 35+ & PCOS Club.
• Prolific writer and editor of many books.
• Woman of the Year 2010 by DLA .
• Amar Ujala Gaurav Samman Award by Amar Ujala for special achievements in Agra.
• Swayamsiddha Award by Hon. Governor of UP Shri Ram Naik Ji.
• Economic Times Award for Most Inspiring Woman by State Health Minister of UP, Anupriya Patel. Disclaimer:The pages slugged ‘Brand Connect’ are equivalent to advertisements and are not written and produced by Forbes India journalists.