The trip may bring some renewed attention to Blue Origin, which has taken a slower approach to the development of its vehicles than the other companies, and recently lost out to Musk's company in a bid to build the next lander that would carry NASA astronauts back to the moon 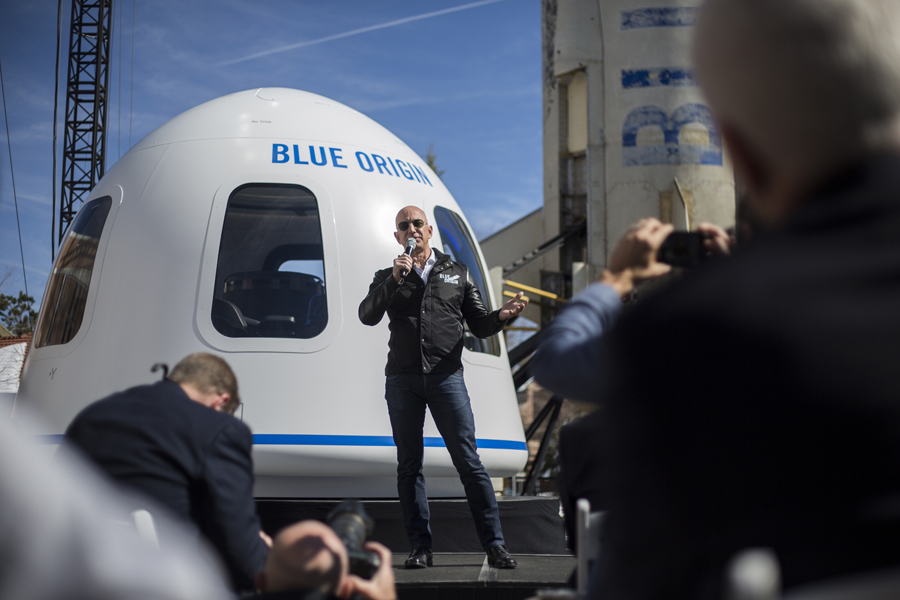 Jeff Bezos announces Blue Origin’s New Shepard space system during the 33rd Space Symposium in Colorado Springs, Colo., April 5, 2017. Bezos said on Monday, June 7, 2021, that he would be on board when his rocket company, Blue Origin, conducts its first human spaceflight next month, shortly after he steps down as chief executive of Amazon. (Nick Cote/The New York Times)

In the battle of billionaires with rocket companies, Jeff Bezos will finally beat Elon Musk.

Bezos, the founder of Amazon, said Monday that he would take a trip to space next month when Blue Origin, the rocket company he founded more than two decades ago, conducts its first human spaceflight.

“Ever since I was 5 years old, I’ve dreamed of traveling to space,” Bezos, 57, said on Instagram. He said his brother Mark would join him on the flight, allowing him to embark on “the greatest adventure, with my best friend.”

Bezos made the announcement in the middle of a busy year for human spaceflight. Blue Origin’s biggest competitors in private rocketry, SpaceX and Virgin Galactic, have both announced a number of trips to carry a variety of individuals on launches or flights high above the planet, but neither as yet plans a passenger of such a high profile.

Bezos predicted that he would be a new man after his journey to space: “It changes your relationship with this planet, with humanity,” he said. “It’s one earth. I want to go on this flight because it’s the thing I’ve wanted to do all my life.”

The trip may bring some renewed attention to Blue Origin, which has taken a slower approach to the development of its vehicles than the other companies, and recently lost out to Musk’s company in a bid to build the next lander that would carry NASA astronauts back to the moon.

SpaceX has a couple of missions in the next 12 months that are to take private citizens to orbit. One is scheduled to launch in September and will carry Jared Isaacman, the billionaire founder of Shift4 Payments, and three other amateur astronauts, on a trip to orbit. A second, booked by the company Axiom Space, will carry three wealthy individuals and an astronaut working for the company to the International Space Station. Musk has said he would eventually want to go to Mars, but he has not announced any plans to go to space himself in the near future.

Richard Branson, another billionaire who founded Virgin Galactic, in 2004, has been anticipating for more than a decade a ride on Virgin’s long-delayed SpaceShipTwo suborbital space plane, which is a competitor of Blue Origin's New Shepard. The company completed its latest test flight last month, and Branson may finally get his wish later this year.

Blue Origin’s achievements lag far behind those of SpaceX, Musk’s rocket company. SpaceX has been regularly launching its Falcon 9 rockets to orbit for more than a decade, including taking NASA cargo and astronauts to the International Space Station. Axiom Space last week announced three additional flights to orbit using SpaceX’s Crew Dragon. SpaceX is also planning to fly Yusaku Maezwa, a billionaire who founded the online clothing company ZOZO in Japan, on a trip around the moon in its next-generation Starship spacecraft.

In April, SpaceX beat out Blue Origin and another company, Dynetics, to snag a NASA contract to build the lander that is to take astronauts back to the moon in a few years. (Both Blue Origin and Dynetics have protested the award.)

Blue Origin, by contrast, has so far only conducted a series of 15 uncrewed test fights of its much smaller New Shepard vehicle. New Shepard is designed to take six people on short suborbital flights — rising above the 62-miles altitude generally regarded as the edge of space but then immediately coming back down instead of accelerating to the high velocities needed to enter orbit around Earth.

While New Shepard has yet to carry any passengers, it has been paid to fly science experiments for NASA and private scientists during test flights.

Bezos’ company announced last month that it was finally ready to put people on board for its next test flight, the 16th, on July 20, the 52nd anniversary of the Apollo 11 moon landing.

Blue Origin has yet to say how much tickets on Blue Origin will cost, but it is auctioning one seat on the July 20 flight. Bidding has reached $2.8 million with nearly 6,000 participants from 143 countries, the company said.

The Blue Origin tourist rocket that the brothers will fly on is named after Alan Shepard, the first American to go to space, in 1961.

The launch next month will occur at Blue Origin’s site in West Texas. At about 47 miles, or 250,000 feet, the capsule carrying the passengers will separate from its booster. The astronauts will then get to unbuckle and experience weightlessness for nearly three minutes before the capsule returns to Earth. Because the capsule is fully pressurized, passengers will not be required to wear spacesuits or helmets.

Bezos said in February that he would step down as CEO of Amazon on July 5. Andy Jassy, the chief of Amazon’s cloud computing division, will become CEO, while Bezos will become executive chairman. Bezos said he wanted to put more time and energy into his other passions, including Blue Origin.

Bezos predicts that in the decades ahead, millions of people will live and work in space.

Blue Origin’s business includes building rocket engines, which it sells to another rocket company, United Launch Alliance, and which it plans to use for its larger orbital rocket, New Glenn. But Blue Origin lost out to SpaceX and United Launch Alliance in a competition to launch satellites for the Department of Defense, and the maiden launch of New Glenn has been delayed to late next year. However, its rocket engines are to help ULA launch a robotic moon lander for NASA as early as the end of this year, the first spacecraft the agency has sent to the moon’s surface since 1972.

Tweets by @forbesindia
Google will pay $270 million to settle antitrust charges in France
The purse, and curse, of Tiger