Vikas Oberoi: The Working (Out) CEO

For Vikas Oberoi, there’s only one thing constant in the changing world of business: His workout schedule 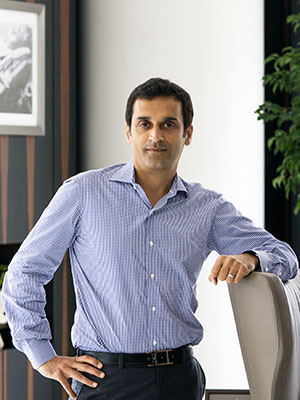 Vikas Oberoi,
CEO, Oberoi Realty
Age: 44
Rank in the Rich List: 79
Net Worth: $780 million
The Big Challenge Faced in the Last Year: Building a strong, empowered management team and cultivating leadership around him
The Way Forward: Using the ‘social infrastructure model’ of building hotels, schools and malls around residential projects to maintain the ‘luxury’ appeal


Workouts are as important as any other meeting,” says Vikas Oberoi. And he walks the talk. Scheduling workout sessions between meetings, keeping his running gear handy or installing an elliptical machine in his office at Goregaon, Mumbai, the 44-year-old CEO of Oberoi Realty will do what it takes to maintain a healthy work-life balance. His mantra: “If you have 30 minutes to spare, why not?”

What sets Oberoi apart from most other CEOs of India Inc is his commitment to a healthier lifestyle. Apart from the physical activity, he also follows a strict diet. “It’s been six months since I’ve had rice,” he says.

For instance, if he is in South Mumbai and has 90 minutes between the end of a meeting and a dinner engagement, instead of heading home to suburban Juhu, he will drop in at the Belvedere fitness club at The Oberoi at Nariman Point in Mumbai for a run. “I can’t come all the way back to Juhu! I even run on Marine Drive for 6 to 7 km, come back, shower, change and go for dinner.” He has even changed into his track pants at work and asked his driver to drop him off at the Juhu beach, from where he has run the few kilometres home.

Oberoi’s company has hit the jackpot over the past five years when its revenue grew almost nine-fold to Rs 742 crore (with a net profit over 40 percent), courtesy his investments in 80 acres of Mumbai’s largely ignored suburb of Goregaon. But despite his 75 percent stake in Oberoi Realty (with a market cap of Rs 5,543 crore), his net worth has fallen along with the 38 percent drop in his stock price since October 2012. Consequently, he has slipped from No. 46 to No. 79 on the Forbes India Rich List.

But tougher times in business have had no bearing on his daily schedule: He makes it a point to fit in a 20-minute workout every morning, and a run between an early conference call and a sit-down with his CFO. Meticulously planning his exercise, diet and work regimen helps.

“At times, I do split training: I’ve done a 20-minute run on the treadmill this morning, and this evening I’m going to do 20 minutes on the TRX machine,” he says. “You can trigger your body’s metabolism if you just give it a 20-minute boost. What I did today is a 90-second walk at 6.5 kmph and a 30-second run at 12 or 13 kmph. On the treadmill it is about 200 calories but you always couple it up with functional training.” This form of interval training—it involves doing the same exercise at different speeds and intensity levels—helps build metabolism. When time permits, he runs for 30 to 40 minutes at a stretch; on Sundays, it is an hour. But when he can’t do his cardio training by running, he opts for cardio-centric or weight-centric functional training.

Having a daily exercise schedule is something that Oberoi is trying to inculcate even among his team members. “All of my management team staff, whose children study at the Oberoi International School, drop their kids off and, by 8 am, are in the gym in the office,” he smiles. They work out, shower, suit up and get to work. “They’ve got this extra one hour and they use it in the gym, and come to work on time.” An early, active start also means getting more time with their families at the end of the day. “You physically get tired, and you go back home and hit the sack. For them, it’s one thing off their backs. I push them,” he adds.

As far as food is concerned, most CEOs tend to eat whatever is put in front of them, whether it is an apple or a samosa, he says. “I make sure I have my desired quantity of protein and carbohydrate; if that math is sorted out, I’m clear in my mind,” says Oberoi.

The significance of weaving an exercise schedule into the workday is underscored by Ravi Krishnan’s Stepathlon, a 100-day corporate wellness programme. Krishnan, the co-founder and CEO of the programme, says the two biggest reasons for people to not have an exercise schedule is the lack of time and space. “You’ve got to create the opportunities and make the time.”

And that can only make you feel better. “To all the CEOs who tell you they come back home and are tired: I’ve come home at 8.45 pm, feeling horrible,” Oberoi says. “I don’t want to go out. But, if I work out for 15 minutes, I’m ready to party for another three hours.”

(This story appears in the 28 November, 2013 issue of Forbes India. To visit our Archives, click here.)

Tweets by @forbesindia
Lupin: In Capable Young Hands
Suit Yourself: The Latest, and Best