After building a top-line consumer products company, the Marico chairman is now helping entrepreneurs help themselves 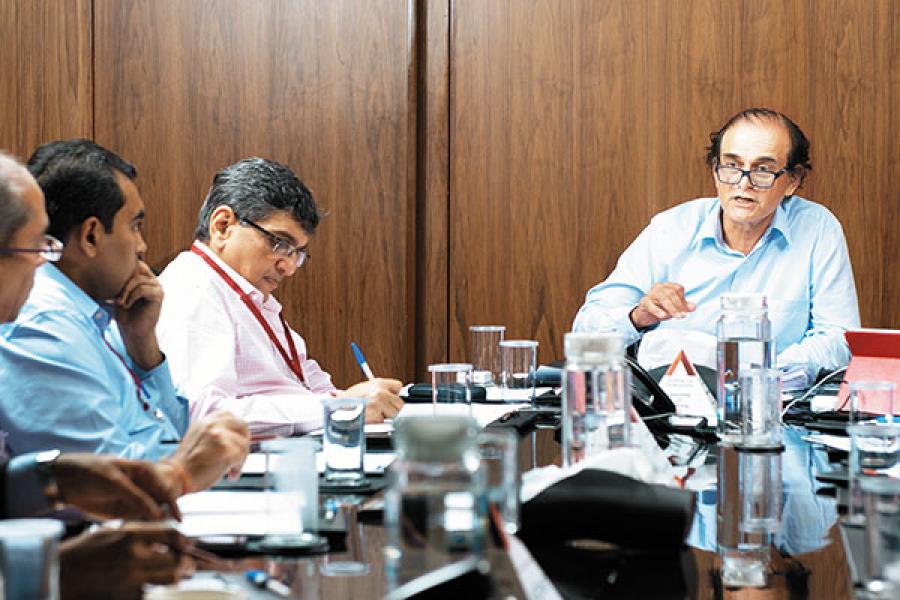 Image: Mexy Xavier
Harsh Mariwala started the Ascent Foundation in August 2012 to give entrepreneurs a platform to learn from each other’s experiences

Harsh Mariwala
Chairman of consumer products company Marico
Age: 63
Rank in the Rich List: 46
Net Worth: $2.02 billion
The Big Challenge Faced in the Last Year: Attracting the right kind of entrepreneurs for his Ascent initiative and scaling up the mentoring programme beyond Mumbai
The Way Forward: Ascent has just opened the Delhi chapter. The next stop will be Bangalore. Eventually, Mariwala wants Ascent to help 10,000 entrepreneurs

It is a rainy Saturday morning in Mumbai’s Bandra-Kurla Complex (BKC). In one of the many corporate offices that dot this commercial neighbourhood, seven entrepreneurs are on their toes, playing a game where each has to add a sentence to eventually make a story. In the end, they have it easy; evidently, it is not the toughest thing that they have done in their entrepreneurial journey.

After this warm-up exercise, ‘Habits Coach’ Vivek Slaria (who, in his own words, helps people create the life they want to lead by building the right habits) gives them a talk on willpower. It’s like any other muscle in the body, so keep sweating it out, he tells his students.

The advice may seem a tad redundant, though, given that Slaria is addressing a bunch of entrepreneurs who’ve essayed success on the risky terrain of finance and economics. But if you watch them move into the next agenda of the day, the “check-in session”, you’ll learn an important lesson: There is no such thing as enough willpower.

One entrepreneur, for instance, can’t muster enough of it to let go of a senior executive. “He has been with me through thick and thin. But with the kind of changes that the business is undergoing, he has become a liability. How do I ask him to go?” he asks.

A promoter-peer also has a similar problem. “My CEO is old now and if I ask him to go, he won’t get too many jobs,” he says.

As the group racks its brains over the golden handshake, a third member comes up with his story. “Last month, Harsh bhai had talked about a similar experience at the offsite. He had mentioned that he had waited too long—two years—to let go of a senior official at his team; because your business is not just about an individual but also about the whole company.”

The two words—Harsh bhai—dissolved the brewing tension in the room. The first entrepreneur dug into his bowl of instant noodles with confidence, relieved that if a business doyen like Harsh Mariwala, 63, the chairman of consumer products company Marico, went through such trials and tribulations, he, too, will be able to brave them. “The life of an entrepreneur is tough and lonely,” he sighs and moves on.

For another hour, the group discusses similar issues and then disbands, promising to meet at the same place, same time, a month later.

A New Beginning
It’s hard to believe that none of the members of this group knew each other before January 2013. They got together because of their shared admiration and respect for Mariwala. The initiative that brought them together was the Ascent Foundation, which was started by Mariwala in August 2012 to give entrepreneurs a platform to learn from each other’s experiences.

“I felt that I should handle entrepreneurs who have a proven business model, but had problems of scaling. The objective of Ascent is to create an ecosystem of entrepreneurs through the formation of ‘trust groups’,” he says. “A group discusses issues that are brought to the table. You get the perspective of nine other entrepreneurs with a business of a similar turnover.”

Those who met at BKC formed one such trust group that calls itself Agni. At present, there are 26 such groups comprising 338 entrepreneurs. “The target is to touch 10,000 entrepreneurs across India, including 1,000 in Mumbai,” says Manak Singh, chief evangelist and the co-creator of Ascent. “Ascent entrepreneurs have a cumulative turnover of Rs 13,700 crore and come from over 65 industries,” says Singh, who has been involved with other entrepreneurship ecosystems like TiE, a non-profit trade group that fosters entrepreneurship.

The impact is beginning to show. SR Hande, who owns Master Metrology, an auto parts manufacturing company in Pune, was looking to form a joint venture with a foreign firm, but was unsure about how to make a pitch. “I asked my friends in Agni and they helped me prepare the presentation and the pitch.”

It’s the comfort of sharing their troubles with like-minded peers that makes the groups tick. “We have a lot of circles in our lives— friends, peers and family. But we can’t share everything about our business with them. Here, in Ascent, we can,” says Vijaysinh Chavan, another Pune-based businessman and member of the Agni group.

Adds Siddharth Upadhyaya, who flies down from Bangalore every month to attend the session: “The best thing is the confidentiality and the trust we share...and the chance to meet Harsh bhai and pick his brain is a great opportunity.”

Harsh's Lessons
Ascent was not the first time that Mariwala reached out to budding entrepreneurs. In his mind, he was always reinventing his role—from being a business leader to a mentor. “I wanted to give something back to society through active involvement, not passive donation. I wanted to give 20 to 30 percent of my time to the cause,” he had told Forbes India in a previous interaction.

Mariwala had been mentoring businessmen on a one-on-one level, but soon realised that every hurdle on an entrepreneurial journey was unique. If he took up every case, he would end up spending a lot of time on very few solutions. “It simply didn’t have the desired impact. I wanted to cover a large number,” he says. Instead of engaging with startup entrepreneurs, he decided to handle those with a proven business model, but with problems of scaling. This is how Ascent—an acronym for Accelerator for Scaling-up Enterprises—was born.

For someone who took over his family business and completely turned it around, Mariwala knows about the challenges of building a company. When he started out in 1971 by joining the family business, it was called Bombay Oil Mills Ltd. “It was completely family-managed: No professionals, some supervisors, and a few family friends working for the family,” recounts Mariwala. There were no brands, not enough talent was coming in and there was no system to help scale up the business.

In 1975, when his father and uncle put him in charge of the edible oil business (there was also the spice extract and fatty acids businesses), Mariwala used the opportunity to bring in branding and marketing concepts into the venture. He travelled across markets, changed the packaging of products and strategically positioned Parachute, the company’s flagship brand. As the consumer products business grew, its needs became different from the traditional commodity business. Mariwala thus decided to spin off the business into a separate company.

In 1990, he set up Marico. The company today has well-known brands like Parachute, Saffola, Hair and Care, and from a turnover of Rs 50 lakh in 1971, has reached Rs 4,676 crore in FY14. The success has made Mariwala a very rich man (he ranks 46th on the 2014 Forbes India Rich List) and an icon for many aspiring entrepreneurs.

One of them is Atul Tibrewala, 49,  co-founder of Cartridge Junction and the oldest member of the Agni group. Joining Ascent was his way of finding an answer to a question that had troubled him for long. “My family was also into the edible oil business like Harsh bhai. In fact, my office was close to his. But see where he is today,” says Tibrewala. “I joined Ascent to understand how he did it.”

The Exclusive Club
Mariwala is careful about the kind of entrepreneurs Ascent attracts. He has put in filters to make the selection process as stringent as that of a top management school. First, an aspirant needs to fill out an online application. “The minimum turnover for a manufacturing business should be Rs 2.5 crore and that of a service business should be Rs 50 lakh. The businesses should be profitable. We also ask entrepreneurs questions regarding their ambition, vision and ethics,” says Singh. The selection panel, headed by Mariwala, then invites the shortlisted candidates for group discussion, which includes a PowerPoint presentation by each.

There is no joining or membership fee; Ascent picks up the tab for most of the expenses. But each trust group must manage and organise its meetings and pay for them. “This creates ownership... and, in some ways, it is up to the entrepreneurs to make the monthly meetings relevant. While we are careful about selection, there is no barrier to exit,” says Singh.

In July, the members pooled in to organise an off-site with Mariwala on the outskirts of Mumbai. Many of them drove together to the location. The success of such team-building exercises can be gauged from the fact that the exit rate (at 18 percent) is way below what Mariwala and Singh had expected (25 percent).

The Ascent team organises various events like webinars and workshops for the entrepreneurs. Two members from each group are trained to be facilitators. Besides the trust groups, they are occasionally sorted into cross-themed groups like family business and manufacturing. Ascent also organises ‘enablers’ events, where its members meet venture capitalists, banks and mentors to navigate through pertinent business issues. One of these sessions saw Future Group founder Kishore Biyani share his entrepreneurial lessons.

Besides sessions with knowledge gurus like Slaria, there are sessions focussed on finance, HR, sales and so on. “Having been in a family business, I have always had this inner fear that I was never strong on the financial front and would always have to depend on somebody else to analyse and take business decisions,” says Ajit Panicker, CEO, Nova HVAC Systems, which is into air-conditioning & lighting solutions. “This kept worrying me till I realised during one of my trust group discussions that all of us felt the same. One of the members got a professional to do a three-hour session on the ABCs of entrepreneurial finance. It was an eye-opener for us,” he writes on the Ascent website.

But what they all look forward to is “Huddle with Harsh”. A themed session, it has only 15 seats and, not surprisingly, “tickets” are sold out within a few hours. (The first 15 to fill in the application make it.) The entrepreneurs spend three hours picking their icon’s brain in his office at the Marico headquarters.

In August, Mariwala spoke to the entrepreneurs on growth. For somebody who has grown from Rs 50 lakh to Rs 5,000 crore, this class should have come easy.