A class on the French leader taught 29-year-old Shruti Shibulal to translate passion into a successful business. Today, she is a rising star in the hospitality industry 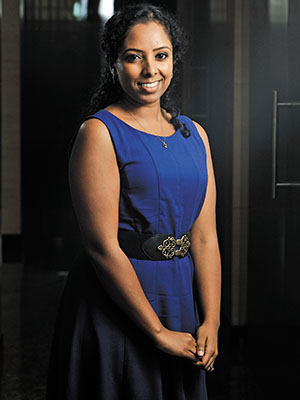 Shruti Shibulal
Promoter and director, The Tamara
Age: 29
Education: MBA from Columbia Business School, New York City
How she is changing the way the company works: Making inroads into various sectors, including hospitality, retail and ecommerce. With a well-planned strategy in place, she is ready to take on serious competition


It’s difficult to pin down Shruti Shibulal: Managing homes in two countries, the United States (New York) and India (Bangalore), and juggling work commitments while zipping across different time zones. And, unlike most 29-year-olds, Shruti has firmly set her sights on the endgame. Her weapon: ‘Napoleon’s Glance’, a lesser known military strategy.

While she was pursuing her MBA at the Columbia Business School in New York, Professor William Duggan introduced her to Napoleon’s Glance, an exercise that helps translate one’s passion into long-term strategic goals. “We had to identify what we were passionate about and trace it to where we wanted to be in the far future,” says Shruti, daughter of Infosys co-founder and former CEO SD Shibulal, who ranks 99th on the Forbes India Rich List. “The idea was to take one small step at a time, but to always maintain perspective on the larger picture,” she says.

Those lessons from Columbia help her today as she heads the Rs 80-crore hospitality development project in Trivandrum under Tamara Real Estate Holding and Development. “I took on the role of director for the Trivandrum project in January. It’s exciting because it concerns real estate development, something that I have not done before. There is learning at every level,” she says.

Senthil Kumar N, director and CEO of IIM, works closely with Shruti and praises the shrewd entrepreneur in her. “She’s a quick learner and a people’s person. She handles people-related issues with maturity and sensitivity. Apart from being a good decision-maker, she is also committed to her work,” he says.

Shruti’s first luxury-resort project, The Tamara Coorg, has been operational for the last two years and managed to break even this year. Reports suggest that the property, tucked away on a 170-acre coffee, cardamom, pepper and honey plantation on the eastern slopes of Karnataka’s Kabbinakad hills, earned Rs 7 crore in net revenues. Other projects in the pipeline look promising as well. The Tamara, a business hotel spread across 1.45 acres on the Trivandrum-Kollam bypass on NH 47, is expected to be completed by 2017. Work on luxury resorts in Kodaikanal (Tamil Nadu), Guruvayoor (Kerala) and Muhamma (Alleppey) will begin shortly.

By Shruti’s own admission, she is a city girl and a perpetual nomad. That explains why she has not lived anywhere beyond five years at a stretch. After her schooling at the National Public School in Bangalore, she completed her under-graduation at Haverford in Pennsylvania in 2006. “I was adamant about moving to New York after college. I landed an internship with Merrill Lynch’s private wealth division there and translated that into a job,” says Shruti.

She returned to India in late 2007. Despite her enviable business lineage, Shruti pursued her own entrepreneurial goals. “I wanted to work on something of my own. Someone once asked me: ‘If there was something I could do, what would that be?’ I said I would start a restaurant since I like food. I like making people happy, and thought that it would be gratifying,” she says.

In 2008, she teamed up with Bangalore-based celebrity chef Abhijit Saha to start Avant Garde Hospitality (AGH). Says Saha, “For me, getting the right partner was very important because food and beverages is a business that requires a gestation period. You need a sense of calmness when you start as an entrepreneur and she had that quality despite her young age.” At present, AGH runs two fine dining restaurants in Bangalore under the brand Caperberry, which focuses on molecular gastronomy, and Fava, a Mediterranean restaurant and lounge bar. Shruti no longer serves on AGH’s board, but IIM remains a 50 percent stakeholder in the company.

Her constant quest to do something different saw her venture into retail last year with the launch of Organic World in Bangalore. The store has over 1,000 stock keeping units of certified organic items, including health and personal care products, food, beverages and home care. Many such similar stores are on the anvil, says Shruti.

She has also made her presence felt in the ecommerce space with TrendSeeder, a New York-based startup founded by Avani Patel, her batchmate from Columbia Business School. Started as a fashion ecommerce website for upcoming designers, it has now developed an accelerator programme to back new talent by helping them build viable businesses apart from connecting them with industry specialists and mentors. Shruti not only has an undisclosed stake in the startup, but is also advisor and director on its board.

The hospitality and retail ventures comprise just a fraction of Shruti’s overall responsibilities. She also supervises the family office assets in the US. (IIM has made various real estate investments in the US and Germany.) And her hard work is paying rich dividends.

For the quarter ended June 2014, Shruti, with a 0.64 percent stake in Infosys, was worth approximately Rs 1,322 crore (as per its closing share price of Rs 3,601.25 on August 22, 2014). The elder of the two Shibulal siblings (younger brother Shreyas is a graduate student at Boston University), she earned approximately Rs 15.78 crore as tax-free dividend from her stake in Infosys for the fiscal year 2014.

“My father is the hardest-working person I’ve ever known. His work ethic is incredible and worth admiring. When you run a business, it is not just about numbers, but also how you take care of your people. My mother is a big influence in making sure that we consider the larger picture always,” says Shruti.

Though she assumes many roles, among them being on the board of Advaith Foundation and on the board of trustees of Sarojini Damodaran Foundation (a trust focussed on health care), Shruti’s main focus remains the competitive hospitality sector. She is fully aware of the competition she’s up against: The Tamara competes with established names like Club Mahindra, Orange County and the Vivanta by Taj in Coorg.

“We are a new brand, but we are doing well. This business is seasonal… we have periods where we are booked for months. However, there is still room for growth,” she says.

Chef Saha sums Shruti up quite succinctly. “For her, work isn’t only about making money, but also something that you believe in and love doing.” Passion and long-term vision are her constant companions as she moves from strength to strength.

Napoleon would be pleased with that.

Tweets by @forbesindia
Not Just Torchbearers, India Inc's NextGen Is Here To Stay
Where India Inc Heads For A Bite