This is absolutely India’s best contingent ever to head to the Olympics. For the simple reason that for all the Olympics I can remember, we have had a handful of athletes who have had a chance of winning the medal. This is the first Olympics that I feel, across the board, there are athletes who are genuine contenders for the medal. This is a great thing for Indian sport and a large amount of credit obviously goes to Abhinav Bindra, Vijender and Sushil Kumar. Abhinav won an individual gold medal that has never been done before in India. Hats off to him! What he did was magnificent, and how he prepared was legendary.

But I think what really has sent self belief through the ranks of athletes across the country were the bronze medals by Vijender and Sushil. Most athletes identify with Vijender and Sushil and they come from that sort of a background. And they feel that if they could do it with limited facilities, no world class facilities or nutrition etc, so can they. That has raised the performance bar for Indian athletes.


Shot Put
Vikas Gowda, three years back, he was contemplating quitting the sport. Everyone wrote him off and said that he always chokes on the big occasions. But after we [OGQ] began to work with him in 2009, he’s won medals in almost every competition that he’s entered: Asian Games (bronze), CommonWealth Games (silver), and Asian Championships (silver). At the World Championships, he came seventh. From not performing he’s come 7th in the WC. Now he’s regarded as one of the top 10 throwers in the world. This means on his day he could very well win an Olympic medal. This is from three years back where he was contemplating quitting the sport.

Boxing:
Men
I am not going to talk about Vijender here. I’ll talk about the younger boys in the team. I think Vikas Krishan has done really well. One of the smartest, most intelligent boxers, we have, and he definitely stands a good chance of winning a medal. Shiv Thapa is the dark horse. He is young and fearless. And it’s the same with Devendro Singh actually. Because they are so young, hardly 18, they haven’t fought too many senior tournaments, so there is no fear in them. They haven’t lost too much. Secondly, Shiv has fought just three international tournaments, the world doesn’t know his technique, and he has a very unorthodox technique. He fights in a way that makes opponents uncomfortable. He stands a good chance as well. 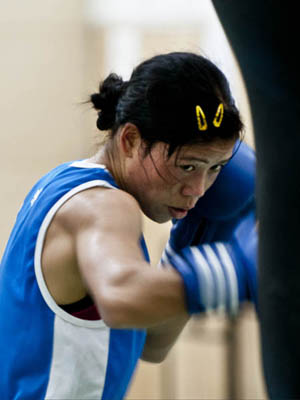 On Mary Kom
Mary had to go from 46 kg to 51 kg, because the least weight category in the Olympics is 51. We worked with Mary and increased her weight gradually. We did it scientifically with a world class nutritionist, Mithi Desai and coach Charles Atkinson. Atkinson has got world class experience in taking boxers up weight categories. Mary’s 29 years old, she can’t grow taller. Her toughest competitors, Ren Cancan (China) and Nicola Adams (England) are both taller than her. And height plays a very important role in boxing. She’s been beaten by both recently. But she doesn’t lose to the same fighter often. We have to get her to a level where she’s in the best form of her life. She has the heart of a lion. She’s easily one of our best bets.


Badminton:
Saina Nehwal’s the same as Mary. She has the fierce determination to win. Saina is currently world number five. She’s beaten numbers 3 and 4 a couple of weeks back. She has what it takes. It’s going to be the little things that decide between winning and losing. The top 7 players in the world are all very close to each other. It goes without saying that Saina has a chance.

Shooting:
When Abinav won in Beijing in 2008, he shot a 596 out of 600 in the qualifying to get into the final. This year at the London World Cup, Abhinav and Gagan Narang both shot 596 out of 600. They didn’t make it. The pressure is very high. The winners shot 598 and 597. The pressure is very high. The difference is as low as .01 and .02. There are 20 shooters who can win the medal today. I want people to get a perspective on how difficult it is to win a medal in this sport. 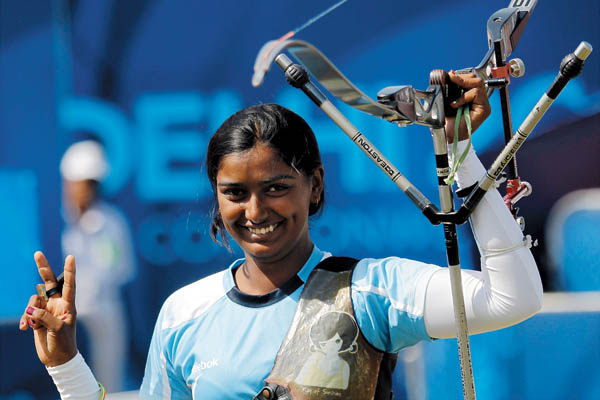 Image: Amit Dave/ Reuters
Archery:
Archery is one of the most underrated sports. In individuals Deepika Kumari (women) and Jayanta Talukdar (men) have qualified. Bombayla Devi and Chekrovolu Swuro are part of the women’s archery team as well. All are capable of medals. The sport is underrated because they are not big stars but that’s all going to change after the Olympics and thousands of kids are going to take to archery after we win a medal.

Hockey:
For me a podium is not realistic. Even a semi final is not realistic. For me we will end up around the 6th or 8th position. Michael Nobbs has done a wonderful job and removed confusion from the minds of Indian hockey players. He’s got the team that he wants. This is the first team where there are no passengers in the squad. We didn’t qualify last Olympics. It’s unrealistic to assume that we will make the semis. We have chill out a little bit on expectations. We are not at the level of Australia, Holland and Germany.

Tweets by @forbes_india
Indian Stars At London Olympics 2012
Podcast: The new socio economic classification is at best a jugaad